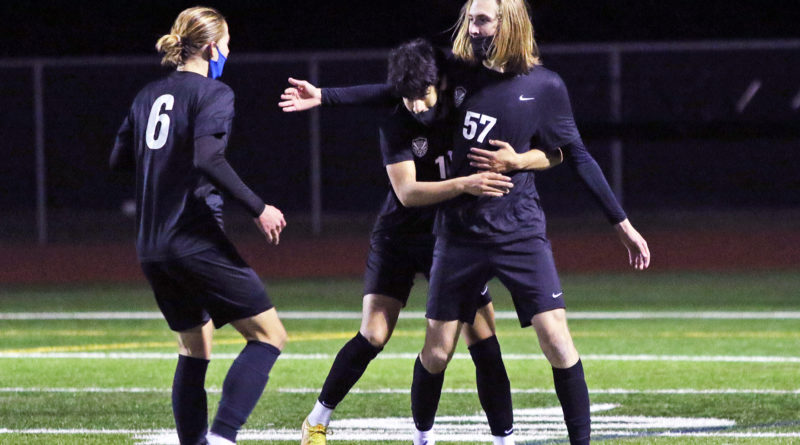 There are no state playoffs.

No high school soccer state championship will be awarded.

But, some things are still worth fighting for — such as the Three Rivers League crown.

The Tigard boys soccer team has claimed that honor the past two years.

And, on Monday, the Timberwolves might have proved just how much they desire the Three Rivers League title.

Tualatin, behind an impressive performance on both sides of the field, powered its way to a 4-0 win over the rival Tigers, the two-time defending league champions, in a TRL match played at Tualatin High School.

“It was a big game, makes everyone a little nervous — you know, Tigard and Tualatin, big rivalry,” said Tualatin senior forward Manny Mayares, who scored the first goal. “I’m just glad we put it away.”

“This was pretty big. Tigard is our rival,” said Tualatin junior midfielder Ben Augee, who scored two goals. “We definitely want to beat them. I know a couple guys on their team, so there’s friendship, and every time you step on the field you want to give 100 percent — try your best and, hopefully, put the game away like we did tonight.”

Tualatin improved to 2-0 in Three Rivers League matches (2-2 overall), putting the Timberwolves in a tie with Lake Oswego for first place in the league standings.

“Definitely, we want league,” Mayares said. “That’s a big goal of ours. We want to take league from them, of course.”

“League. Yep, league,” Augee said with a smile. “Hopefully, we can win the rest of our games and be on top of the table.”

Tigard, which returned only two starters from the 2019 squad that edged Tualatin for the Three Rivers title, moved to 1-1 in TRL matches (2-2 overall), putting the Tigers in third place in the league standings.

“We lost nine starters from last year, and pretty much only (junior) Brandon Mendez and (senior) Jack Hallam are returning from last year,” Tigard coach Angelo Simonetti said. “A lot of guys show up, this late season, and practices were kind of complicated. But we have a lot of younger guys stepping up. My freshman, Jair Nunez, was a good addition to the field. And (sophomore) Angel (Perez-Lopez) also played well tonight.”

In the intense match between the rivals, defense ruled through most of the first half. The Tigers defense, including junior Luis Colorado, junior Ronan Dingman, senior Cooper Christianson and junior Carter Weakland, and the Tualatin defense, including senior Muhammad Faks, senior Cole Niemi, senior Cole Richmond and junior Cesar Jacintos, kept the match scoreless for more than 30 minutes.

But that’s not to say that both teams didn’t have their chances. With 23 minutes and 15 seconds left in the first half, Mayares had a header shot, coming off a corner kick by senior Ivan Galeana Cruz, tipped over the crossbar of the Tigard goal at the last split second by Tiger senior goalkeeper Aidan Paul. Less than three minutes later, Tualatin senior goalkeeper Imanol Mayares punched away a corner kick by Tigard junior midfielder Adam Miller right in front of the Timberwolves goal.

Then, with 12:41 left in the first half, Mendez had a free-kick attempt from 30 yards sail just barely over the Tualatin goal.

But, as the opening half entered its final minutes, the Timberwolves wouldn’t be denied.

Manny Mayares, taking a perfect through pass from Jacintos on the right side, drilled a close-range shot into the Tigard goal, giving Tualatin a 1-0 lead with 7:51 left in the first half.

“Shout-out to our right wingback, Cesar. It was all him,” Mayares said. “I was just in the right place at the right time.”

After the goal, Mayares, in celebration, tried a hand-spring backflip, but ended up landing on his head.

“I had it, but my arm just gave out. I know it looked funny,” Mayares said with a laugh.

Still, despite the failed jubilation, Tualatin achieved one of its main goals of the match.

“It’s a crazy feeling. Coming in, we wanted to score the first one,” Manny Mayares said. “We’ve been conceding the first goal every time. Scoring first for us today was a big goal. We wanted to have the momentum the entire way today, and I think we did.”

The Timberwolves sure added to their momentum during the second half.

Augee increased the lead to 2-0 when, with 30:16 to play, he drilled a line-drive shot from 25 yards just underneath the crossbar of the Tigard goal. With 26:38 remaining, Augee converted a free-kick pass from senior Drew Carlisle, putting his shot from 12 yards inside the left post of the Tigers goal, making the score 3-0.

“It felt good to score two in the same game,” Augee said. “The first one, I kind of just took it down the middle. I looked up, saw the keeper, and just hit it as hard as I could. The keeper touched it a bit, but it still went in. The second one, a cross came in, I broke off the back post, a little flick on the header, then it was instinct, boom, and I hit it in the corner.”

Sophomore forward Remus Repcak finished the scoring. After taking a header flick pass from Carlisle, Repcak blasted a shot from 27 yards into the net of the Tigard goal, making the score 4-0 with 19:53 to play, wrapping up the impressive victory for the Timberwolves.

“We came in with a mindset that we weren’t letting any ball in our area, and we were winning every ball in the air, and shout-out to the defenders for making that come true,” Manny Mayares said. “The first three games, we struggled a little bit, but, thanks to Coach (Chris) Duke and Coach (Andrew) Egan, we figured things out and now we’re doing much better, both attacking and defending, so shout-out to them.”

“We played as a team,” Augee said. “Defensively, we were really strong. We didn’t give up a goal. Offensively, we probably could have got a couple more, but four is really good against Tigard.”

Tualatin had 14 shots on goal and six corner kicks.

“This was really fun. I was glad to be out here with the team and win against our rivals,” Augee said.

“This was really fun. I love the guys I play with,” Manny Mayares said. “Overall, it was a great time. It’s amazing.”

Tigard had three shots on goal and four corner kicks.

“Sometimes, all the game plans you put over there, they don’t work. I think Tualatin executed really well. All the kudos for Tualatin. They played real well, and deserved all the points,” Simonetti said.

“I think the scoreboard was a little too much, but the game translated into some situations, but we’ll fix some things before the next game, and definitely that wasn’t our best game today. There’s no excuse for 4-0, but I think the scoreboard doesn’t translate to the game. The game was very tight, but they capitalized on their good chances, and we didn’t.”