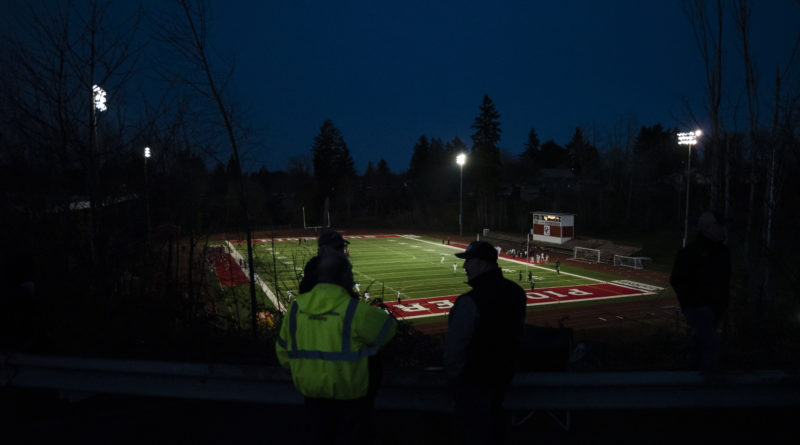 Here are five things that stood out during the second weekend of action.

1. Tigard, The Dalles, La Grande find waiting another week worth the trouble

While most teams throughout the state celebrated the return of football in Week 1, a few had to bide their time another week for various reasons.

One such team was Tigard, which had its scheduled opener canceled when Lake Oswego was forced into COVID-19 quarantine. That forced the Tigers to wait another seven days before they could finally take the field for the first time since their stunning overtime loss to Mountainside in the second round of the 2019 state playoffs.

“Not being able to play Week 1 was disappointing,” Tigard coach John Kemper said. “With all the stop-and-go that has happened over the last 12 months, to finally get the go-ahead from the state was very exciting. Then, to have the first game canceled was a hard pill to swallow.”

The Tigers finally took the field Friday night at Oregon City, and what Kemper noticed right away was “our guys were very quiet. The bus ride over, you could have heard a pin drop.”

They saved their noise for the second half. After shaking off the rust and calming the emotions of ending a 483-day hiatus, they found their footing and eventually pulled out a 34-16 victory.

“The first few series, you could tell we were a bit over-amped,” Kemper said. “We settled in and got a feel for the game and made the plays when we needed to.”

One of those plays they needed came from senior Spencer Kuffel, who returned after missing two seasons after having recovered from two ACL tears. His 85-yard interception return for a touchdown just before halftime pushed their lead to 20-10, and he had two more interceptions that set up Tigard scores in the second half.

“I don’t think most people would put themselves through what he has done to get back,” Kemper said. “To have the game he had after over two years off was outstanding. It was emotional for sure. We are extremely proud of what he has done.”

Two semifinalists from last season’s 4A state playoffs also finally returned to action. The Dalles traveled to Milwaukie and defeated Putnam 27-6, and defending 4A champion La Grande won at Nyssa 42-8.

The Riverhawks got a late start to camp while the school district worked out the details of opting-in to the season — Wasco County still was in Extreme Risk at the time — and then had nearly a week’s worth of practices wiped out by last month’s snowstorm.

The rust certainly showed throughout the game, with the Riverhawks losing five fumbles and committing 12 penalties.

The Tigers also lost practice time because of the snowstorm but hardly looked out of sorts in their opener against Nyssa, a 3A school that joined the hybrid 4A/3A Greater Oregon League this season. They scored on their opening drive and didn’t look back despite starting five newcomers on the offensive line.

2. Sunset proved the fight for Metro League title would have been more than a two-team race

In Mountainside’s two-plus seasons as a varsity program, it had yet to be shut out and had been held to fewer than 10 points only twice — both times by seven-time defending Metro League champion Jesuit.

That all changed Friday night when Sunset stopped the Mavericks five times on fourth down and forced two turnovers in a 20-0 victory that showed while the Apollos experienced some key losses to graduation after last season, they would have been a factor in the Metro League title race regardless.

Sunset coach Damien Merrick, well aware of Mountainside’s big-play capability, said the game plan focused on keeping everything in front of them and forcing the Mavericks to dink and dunk their way down the field.

Led by linebacker Connor Stevens, with 8½ tackles and 2½ sacks, and defensive backs Nick Molitor (7½ tackles) and Nic Janati (second interception of the season), the plan worked nearly to perfection.

Junior quarterback Brian Mannion averaged just 7.3 yards per completion (19 of 35 for 138 yards), and though No. 1 receiver Andrew Simpson had eight catches, he managed just 38 yards (4.8 per catch).

“Our kids did a phenomenal job,” Merrick said. “It really helped that we could drop seven into coverage all night and get some pressure on (Mannion) with just rushing four. That was huge.”

Also huge was the ability of junior Caleb Kim to come up with big runs despite a Mavericks defense stacked to stop him. The Apollos regularly faced eight or nine defenders in the box, but Kim ran seven times for 32 yards on their opening drive, finishing it with a short touchdown run.

He added a 1-yard touchdown run on the final play of the first half and capped his 18-carry, 80-yard evening by breaking off a 30-yard run (sprung by a Liam Brown block) in the fourth quarter that set up the Apollos’ clinching score.

“Caleb was patient and came up huge in key moments,” Merrick said.

The Apollos take on Westview this week before finishing the regularly scheduled portion of their slate with back-to-back games against two of the three teams that shared the Metro title last year in Beaverton and Jesuit.

3. Don’t bet against Jesuit rebounding from a defeat

Speaking of Jesuit, the Crusaders bounced back from a Week 1 Holy War loss to Central Catholic with a 20-12 victory at Clackamas.

That Jesuit rebounded with a victory should not come as much of a surprise. The Crusaders have lost consecutive games only twice over the past 20 years, the last time when they started the 2014 season 0-2. Their record after losses during that span is 19-2.

They jumped out to a 12-0 halftime lead and held Clackamas to 32 rushing yards and 248 yards of total offense.

“Our effort was very good in the first game, but our execution and physicality was not up to our expectations,” Jesuit coach Ken Potter said. “That is what we focused on this week. After a loss, we look at ways we can improve as a team. We look at ourselves and dedicate our team to doing the little things better.”

One change Potter made for the Clackamas game was mixing junior Tyree Blake into the rotation at tailback alongside junior Michael Rincon. Blake, a 6-foot-3, 215-pounder, played exclusively at linebacker against the Rams but proved an ideal complement to the 5-10, 185-pound Rincon in the backfield, with the duo combining for 170 yards and each scoring a touchdown.

“Tyree is an excellent linebacker for us,” Potter said. “I thought he ran well and was able to give Michael some relief.”

The Crusaders face Sherwood this week in their home opener, then take on Metro rivals Mountainside and Sunset before determining their culminating-week opponent.

While Dallas returned to the playoffs last season after a three-year absence, the Dragons never posted that signature win that said, “We’re back.”

Perhaps Friday’s 38-27 victory at Lebanon will serve as that defining moment as they put back-to-back 2-7 seasons further in the rear-view mirror and look to post consecutive winning seasons for the first time since 2000-01.

“This was a really big win for our program,” Dallas coach Andy Jackson said after his team broke a five-game losing streak to the Warriors. “Last year, we all felt the rise of the program. However, we went through some major injuries and didn’t finish the way we wanted to. This year, we have a handful of those kids back and added a sophomore class that went undefeated at the JV level.

“It was nice to see the resilience of our men as the pendulum swung throughout the game. This is where I believe we have grown as a program — when the game is on the line in a big game, our kids are at their best.”

That resilience was put to the test when Dane Sipos’ second third-quarter touchdown drew Lebanon within 23-21. The Dragons — who had four touchdowns called back by penalties — answered with a long drive marked by several third-down conversions by quarterback Ashton Foster to receivers Connor Nash and Chase Brushe, with Logan Person capping the drive with a 12-yard touchdown run.

Following an interception, Dallas capitalized after another long drive with a touchdown by John Hofenbredl to push the lead to 38-21 midway through the fourth quarter.

“We talk about this all the time in practice that things will get crazy in a game, and all you have to do is focus on executing your job at the highest level,” Jackson said. “It felt like we couldn’t catch a break, but our kids kept working and stayed focused. Our team is special, and we expected to win that game. We have some really good kids with a great future ahead of them.”

While much of the attention surrounding Friday’s The Dalles-Putnam game focused on the debut of three-star recruit Andrew Savaiinaea in his return to The Dalles, don’t lose sight of the improved play the Kingsmen displayed after a 33-0 loss in Week 1 against Ridgeview.

They forced three of the Riverhawks’ five fumbles, including sophomore Sam Baldwin chasing down Jaxon Pullen and knocking the ball free after a 42-yard run, with Adam Tetrick recovering at the Putnam 13.

They also grabbed an early lead after Matt Schweinsberg recovered a fumbled handoff (one of three fumble recoveries the junior linebacker had) at the Riverhawks 28. Two plays later, senior Alec English ran 25 yards to give Putnam a 6-0 lead.

“I love how hard our kids play,” Kingsmen coach Tim Jacobs said. “You know, they don’t take snaps off. There were some things that we weren’t able to do last week that we were able to get going this week.”

English is one of three seniors on the roster — Christian Rainville and Zeke Corbus are the others — and Jacobs preaches patience coming off back-to-back two-win seasons in rebuilding a program that last reached the postseason in 2012.

“We’re looking for growth these next four weeks,” he said. “We’re getting the opportunity to start a lot of underclassmen, so we want to see guys get better at their roles within the team. I really think that as we go, if we have that improvement week to week, the spring will get better and better for us.”