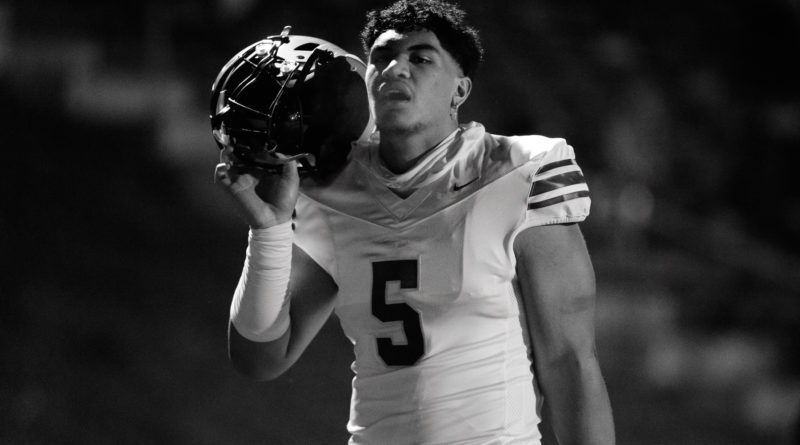 The 3-star prospect’s life has changed perhaps as much as anyone’s during the turbulent past year. His demeanor on the field and his character off it have remained the same.

A year ago, Andrew Savaiinaea was getting ready for spring break at Eastside Catholic High School in the Seattle suburb of Sammamish.

He’d finished his sophomore season for one of the West Coast’s top football teams, playing alongside the nation’s top recruit, and was making a name for himself on the recruiting trail.

Suddenly, like everyone else worldwide, COVID-19 turned his world upside down.

Friday night at Putnam High School in Milwaukie, Savaiinaea’s world began righting itself as he returned to the football field after 16 long months as a junior tight end and defensive end for The Dalles.

“It just feels good to get back on the field, to get back to hitting and everything like that,” Savaiinaea said. “I’ve still got a lot to work on, but it was good to be back.”

He had a relatively quiet first game with the Riverhawks, finishing with three tackles in a 27-6 victory in their season opener and catching three passes for 39 yards and a touchdown.

Much of that was by design. Savaiinaea played the entire game at right defensive end, and the Kingsmen (0-2) ran only three plays to his side of the field.

“We felt our best course of action would be to find out where he is and try to minimize his impact on the game,” Putnam coach Tim Jacobs said.

“Still, I can think of a couple of pass plays in particular where he came off the edge and you could see why he is being recruited the way he is, absolutely. He’s got a very bright future in front of him.”

How he’s being recruited is that the three-star defensive lineman sports a half-dozen offers, including Oregon, Oregon State, California and UCLA, most coming following standout performances at several offseason events — the eForce Combine in July, the Stack Sports Showcase in October and January’s National Preps Collegiate Showcase in Washington.

After being named the defensive line MVP at January’s Showcase, the offers started rolling in. Right now, he doesn’t have a favorite or a top-five list — at least, not one he’s willing to disclose.

“I’ll definitely say that Cal, Oregon and UCLA are probably the most consistent as far as staying in touch with me,” Savaiinaea said. “It’s definitely been a fun and, you know, interesting experience so far, but the main thing is just not to let all this get to my head, and at the end of the day, just focus on what I need to get done.”

How a 3-star recruit ends up in The Dalles

Savaiinaea’s football journey has come full circle back to his childhood home, where he played with many of his current Riverhawks teammates in The Dalles Youth Football through sixth grade before his family moved to Puyallup.

His mother, Mary, worked for Alaska Airlines, and his father, Andrew, worked at a grocery store while helping his son develop as a defensive lineman.

“He’s a big influence on me, not just with football, but with life in general,” Savaiinaea said. “His passion for coaching has never left, and it’s great to have him out here, to get that father-son bond, to attend these little moments.”

As a sophomore at Eastside Catholic, Savaiinaea finished with 25 tackles and three sacks despite missing several games with a right knee injury. Entering the spring of 2020, he had several camps lined up, then looked forward to a junior season playing opposite senior J.T. Tuimoloau, the No. 1 player in his class.

He expected the spotlight that shined on Tuimoloau might also catch him, putting him on more colleges’ radars.

Then, the world shut down in an instant. Spring ball at Eastside Catholic? Canceled. Same with the showcase camps Savaiinaea had signed up for.

Finally, the double whammy hit — his mother and father both lost their jobs, a significant financial blow. The family still owned its home in The Dalles, however, making the decision to return to the Columbia Gorge a no-brainer.

“It was kind of just an easier move back down for us,” Savaiinaea said. “And, I mean, it was pretty much home.”

It’s not every day that a three-star recruit falls into a coach’s lap, but that’s exactly what happened for Riverhawks coach Andy Codding when he learned the Savaiinaeas were returning to The Dalles.

“I was familiar with the family, and I knew how he’s progressed in his high school years up to now,” said Codding, who had Savaiinaea’s father on his staff as defensive coordinator during his first run at The Dalles from 2008-10. “I was excited knowing he would be coming back to play with childhood friends and to help our team out considerably on both sides of the ball.”

Savaiinaea’s familiarity with his once and future teammates helped smooth the transition to his “new” surroundings.

“When I first arrived, their faces were shocked,” Savaiinaea said. “But I went to school with the majority of these kids back in elementary school and middle school, and I played football with most of them, so it was a lot easier on me.

With Savaiinaea on board, Codding immediately started plotting ways to utilize the 6-foot-4, 260-pound freak of nature on both sides of the ball.

“I don’t know if I’ve seen a more dominant big man in high school football in the last 25 years,” Codding said. “A kid that goes both ways and has an impact on the game so singularly as a lineman and tight end, that’s a tough ask to do that from those positions, but he’s doing it.

“He hasn’t played much tight end since he was a younger kid, but you saw (Friday), he’s faster than he looks at 260 pounds, and with his height advantage, his physicality, he’ll be a tough mismatch for most outside linebackers. Plus, he gets off the ball fantastically and blocks the edge really well. We got around the corner several times on the green sweep with him as one of three edge blockers out there.”

Savaiinaea is excited about getting a chance to show what he can do offensively.

“It’s fun for me, and I think it’s a good way to show my versatility and athleticism to other people and coaches,” he said.

Savaiinaea learning to live with target on his back

While the transition to his new team has gone fairly smoothly, the fact remains that Savaiinaea moved from a West Coast powerhouse that finished No. 9 in the final USA Today Super 25 West Region rankings and won a Washington Class 3A title to a rising Riverhawks team that just two seasons earlier played an independent schedule.

With the Crusaders, Savaiinaea often lined up against players who matched up with him size-wise and athletically. That often won’t be the case during The Dalles’ five-game spring schedule — an exception being a much-awaited Week 5 matchup against Hood River Valley and Oregon State signee Henry Buckles, a 6-3, 285-pound tackle.

“I’ve got to keep that mindset that no matter who is in front of me, I’m just doing what I do, just keeping that same mentality every time,” Savaiinaea said. “The main thing for me is to not let my foot off the gas pedal and not taking easy just because there may not be 6-5, 260 out here. I’ve got to come out here and prove myself every time, no matter what.”

He also must become accustomed to having teams game-plan for him as Putnam did. He acknowledged getting frustrated with nearly every play Friday going away from him.

“I mean, last year, I was up there with J.T., and having him on the opposite side, that just kind of opened things up for me,” he said. “Down here, it’s a little bit of the opposite, so it’s definitely hard to adjust, but I’m just going to have to get used to it.”

Having so much attention focused on Savaiinaea freed up teammates such as senior linebacker Dusty Dodge (nine tackles, 3½ for loss) and sophomore Kade Wilson (11 tackles, two for loss) to blitz with abandon with the Kingsmen limiting their running plays to one-third of the field.

“With them always double-teaming him, it means one less guy when I’m coming up the middle,” said Dodge, himself a transfer before his junior year from Goldendale. “He has really had an impact on our defense. Knowing he has his responsibilities covered allows me to focus on plays on my side of the field.”

Codding added, “That’s the whole idea. If we can wall off one side with someone who other teams are afraid of, we can take chances on the other side.”

One notices right away the no-nonsense manner in which Savaiinaea plays. He brings no attention to himself after making a tackle, catching a pass or executing a perfect seal block — such as the one that sprung junior Jaxon Pullen for a game-tying 70-yard touchdown run against the Kingsmen.

He allowed himself one moment of celebration — after catching his first career touchdown late in the game to seal the victory.

Otherwise, he stayed pretty even-keeled, even as he shook hands with the Putnam players following The Dalles’ final snap in victory formation at the end of a hard-fought game.

“He’s a super humble kid,” Codding said. “If you didn’t know he was getting attention from colleges, you wouldn’t have any idea from his behavior or actions or words. He comes in every day, works hard, is friendly with all the kids on the team. He grew up with them, so there’s no sense of entitlement, no arrogance — just a hard worker who’s been a good addition to our program.”

As for the future, Savaiinaea knows time is still on his side, and he hasn’t set a target date for when he’ll announce a college choice. He looks forward to when the NCAA recruiting dead period — recently extended to May 31 — ends and he can begin talking directly with coaches and making some campus visits.

“My dad’s main message to me is just doing what’s best for me,” he said. “He tells me all the time not to worry about him and my mother, but I mean, obviously, I’m going to, because that’s just me.”

Codding said he’s fielded calls from coaches who see Savaiinaea as a tweener between an edge player and an interior lineman. He has a projectable frame and could bulk up to 280-290 pounds and retain the quickness and lateral movement that make him a dominant high school defensive end.

For now, though, Codding is just happy to have him playing on the edge for the Riverhawks.

“He’s definitely going to make it to the next level, and I’m excited to watch him for years to come,” Codding said.