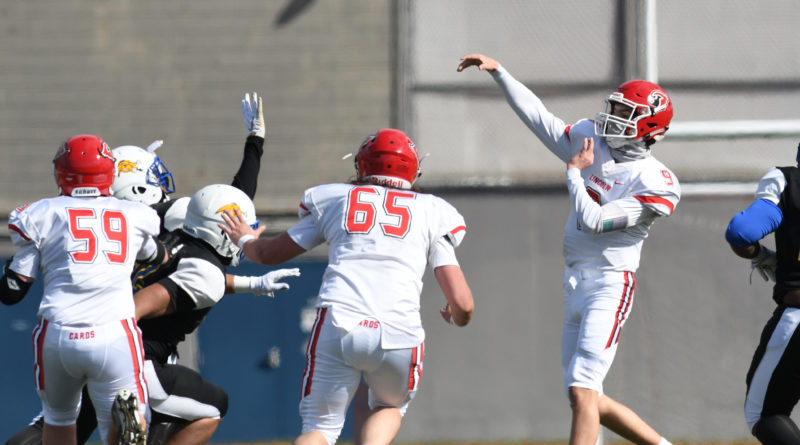 Quarterback Ethan Jones scrambled for a 34-yard touchdown with 13 seconds left as the Bruins (1-1) of Gresham rallied to defeat the host Democrats (1-1) of North Portland in a game at Roosevelt High School in North Portland.

The Democrats led 12-0 at halftime on the strength of touchdown runs of three and 64 yards by Oregon State signee Damir Collins. In the second half, the Bruins’ running game — led by Carter Baggs, Jake Fay and Reece McKenzie — found its rhythm, and by the end, Barlow had gobbled up about 200 yards on the ground.

Bruins linebacker Andrew Collins sealed the win with an interception.

The Warriors led 13-0 and were up 20-14 midway through the second quarter after the first of Tanner Volk’s two touchdown catches.

The Generals scored after a punt snap was bobbled inside the Roosevelt 10-yard line on the first possession and built a 32-20 halftime lead en route to the victory over the host Roughriders (1-1) in North Portland.

Grant’s Logan Going was 8 of 12 for more than 200 yards and four touchdowns, and he added a touchdown on the ground.

Timon Davis had one touchdown through the air and returned a punt after Roosevelt’s second possession for another touchdown. Donald Stephens rushed for two touchdowns for the Generals (2-0) of Northeast Portland, and Luke Borchardt (five catches, 150-plus yards receiving) had two scoring catches.

Karnell Dedmon returned an interception for a third-quarter touchdown as Grant widened its lead. Brennick Beck broke up two passes and had a half tackle for loss.

Eric Marquez returned a fumble for a touchdown for the Roughriders, and Imarion Kelly passed to Dominique McDonald-Barber for another score.

Cole Thomas ran for a touchdown and caught a scoring pass from Parker Feld-Gore to send the Trojans (1-1) to a 14-6 halftime lead in the win over the visiting Senators of Northeast Portland.

Jayden Brannan ran for a 26-yard touchdown in the fourth quarter and totaled more than 120 rushing yards for the Trojans of Southwest Portland.

Madison’s key contributors included running back/defensive back Will Cabello, who made a couple of circus catches and forced a fumble. Linebackers Leo Johnson and Tevita Tauhelangi made a number of key tackles, as did cornerback Moses Farmer, who also had a key red zone interception.

Isaiah Rickard and Beckett Parker-Lisk caught touchdown passes from Zander Garner, Joel Beltran ran for two scores, and Garner added a touchdown on the ground to power the Lightning over the Warriors in a game between Southeast Portland schools at Roosevelt High School in North Portland.

Gresham’s Zack Kaufman was 10 of 19 passing. Ethan Evans had two catches for 19 yards and had a tackle for loss on defense. Jack Nehler had seven solo tackles, assisted on six others and had a sack.

Miles Wilson rushed for three touchdowns and Keenan Coleman returned one of his two interceptions for a score to help the Raiders of Troutdale open their season with a victory over the host Broncos (0-2) in Northeast Portland.

Wilson, a returning first-team all-Mt. Hood Conference running back, finished with 86 yards on 12 carries for Reynolds, which attempted three passes. Jordan Larios ran four yards for a touchdown on his only carry.

Tyler Pfeifer ran for two touchdowns and Jordan McCarty passed for three scores, leading the Foxes (1-1) to victory over the RedHawks (0-2) in Silverton.

The Class 5A Bulldogs from the Oregon coast pulled away from a 14-14 halftime score to defeat the Class 4A Bulldogs (0-2) from eastern Oregon in a matchup at Crook County High School in the central Oregon town of Prineville.

North Bend’s Jake Posey ran for two touchdowns. Quarterback Coleman Compton ran for a score and passed for another (to Liam Buskerud). Craig Edera also had a rushing touchdown for North Bend (1-1).

Baker took a 7-0 lead after Gabe Gambleton’s 20-yard run, and Baker went up 14-8 when Zander Arriaga batted an option pitch and recovered it in the end zone for another touchdown.