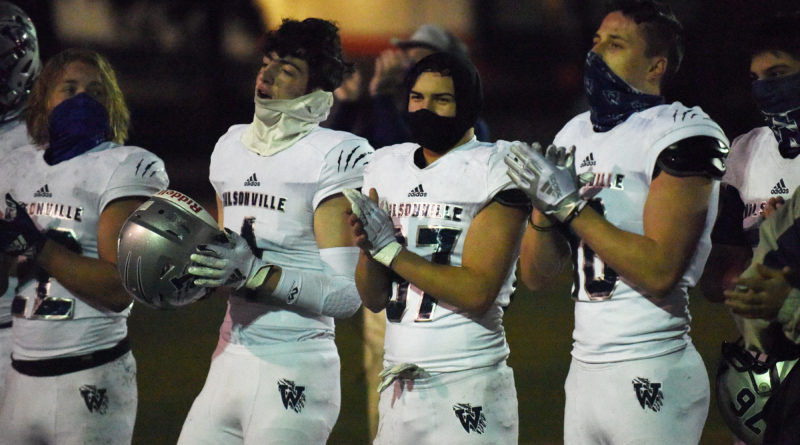 On Friday, the Wildcats made it two dominant performances in two weeks with a 30-14 victory at Class 6A Beaverton

BEAVERTON — For Wilsonville, one can’t help but wonder: What if?

What if it were a normal season for high school football in Oregon?

What if the COVID-19 pandemic hadn’t forced teams to play a six-game schedule with no postseason?

Coming off a quarterfinal appearance in 2019, plus trips to at least the semifinals the previous four years, the Wildcats were primed for a run at the Class 5A state championship. On Friday, they proved their mettle with a dominant 30-14 victory over Class 6A Beaverton at Beaverton High School in Week 2 of the six-game season.

While the Wildcats players have talked about the “what if?” scenario, they’re grateful to simply have the opportunity to play again.

“It’s kind of a bummer,” senior running back Lucas Graves said. “Everyone kind of hopes for that and dreams for that (state title run) throughout their high school football career. But I think we’re just taking advantage of what we can get. With COVID, everything is just so up in the air, so we’re just happy to be out here.”

Wilsonville coach Adam Guenther knows his team would have been among a handful of Class 5A contenders this season, but he said the Wildcats can only “control what we can control.”

“We’ve got the talent, the character and the quality of kids to make a deep run,” Guenther said. “There’s a lot of talented 5A teams out there, but we’re right in the mix of it all. There’s nothing we can do about that. You can do one of two things: You can dwell on it and let it eat at you, or you can be thankful for what you have going on. I’m ecstatic we get to play.”

Knapp, the NWOC West offensive player of the year in 2019 after throwing for 30 touchdowns, had transferred to Del Valle (Texas) for his senior season but returned to Wilsonville to finish this school year.

“(Knapp) has been a Wildcat his entire life and he’s going to finish his career as a Wildcat,” Guenther said.

Wilsonvillle increased its lead to 16-0 on Graves’ 10-yard run — he carried the pile almost five yards into the end zone — with 4:30 before halftime.

“We came ready to compete and we wanted to show it,” said Graves, who had 18 carries for a game-high 87 yards.

The second half produced more highlights for Wilsonville. Senior Colby Guenther scored on a 2-yard run with 3:58 to go in the third. The Wildcats put on the finishing touches when senior Shane Tacla scored on a 96-yard interception return with 10:07 left.

“Our defense the last two weeks has been lights out,” said Adam Guenther, whose team beat Scappoose 34-15 in Week 1.

Beaverton got on the scoreboard late with two touchdowns from junior quarterback Jay Keuter — the first to junior Hayden Eiguren on a 21-yard pass. The second came on a pitch to junior Cristian Gonzalez, who ran it in from 3 yards.

The Beavers (0-2) were playing without star receiver and defensive back Trent Walker, an all-state second-team selection on offense in 2019. Walker, who signed as a preferred walk-on with Oregon State, dislocated a shoulder filling in at quarterback in last week’s loss to Mountainside.

Beaverton coach Bob Boyer isn’t sure whether his top player will return for the final four games.

“I don’t know if he’ll be back,” Boyer said. “Hopefully he will, but possibly not. If not, he still has Oregon State where he’s going to play.”

Boyer said it’s a developmental season for the Beavers in preparation for the fall. He credited the play of junior Ethan Engstrom, who barely played on the JV team in 2019 and had an interception against the Wildcats. Boyer also highlighted sophomore running back Koffi Kouame, who has played just two years of football and led the team with 15 carries for 60 yards.

“Kids are making strides and stepping up,” Boyer said. “That’s what we’re hoping for this season.”

Keuter, who transferred from Mountainside, led the Beavers’ passing attack, going 16 of 23 for 214 yards with two touchdowns and one interception. Gonzalez had seven catches for 59 yards.

“We started off slow,” Keuter said. “Our team seems to come out with a lot of energy, and we need to get points on the board early instead of waiting until the fourth quarter to finally score.”

For Wilsonville (2-0), Hix was 14 of 27 for 132 yards and a touchdown. Dart led the receiving corps with four catches for 58 yards, and Colby Guenther added four receptions for 42 yards.

Even with no state championship to play for, the Wildcats are making sure not to take any game for granted.

“I’m enjoying literally every second we get to play,” Adam Guenther said. “I’m going to soak it up. We have a short six-game season with these guys. This senior class, I’ve watched them grow up since they were third-graders, and they deserve a lot more than what they’re getting. But we’re happy with what we’ve got, so we’re going to enjoy it.”