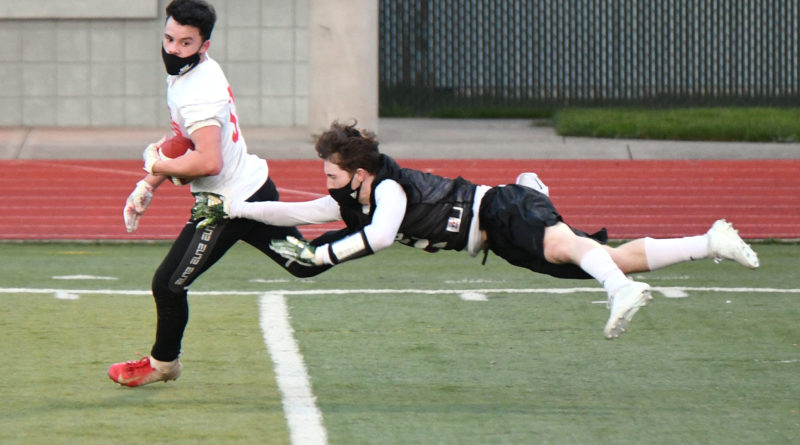 Wednesday’s football game between Centennial and David Douglas looked as if it could have taken place down the street at Lincoln Park rather than inside the Scots’ stadium.

The two schools were the only in the Portland metro area that did not opt-in to the OSAA’s tackle football season, meaning they played an official seven-on-seven touch game on the OSAA schedule.

No pads, makeshift uniforms and players in shorts running free downfield gave it the feel of a pickup game rather than an official contest.

However, they had referees and kept score — David Douglas won the first half, and Centennial rallied to win the second, with the Eagles’ sideline erupting when they scored the go-ahead touchdown with 21 seconds left.

Most important to everyone involved, in a couple of weeks, both teams will suit up for real after the Oregon Health Authority announced that Multnomah County would move to the moderate risk category Friday.

“Tonight was just a big fancy practice for us under the lights,” said Centennial coach Butch Self, his smile beaming through his mask. “It was kind of the appetizer to get everybody’s taste buds wet to go for the 27th.”

The stumbling block for both schools opting-in to the season was their school boards’ decisions not to begin limited in-person instruction — a requirement set by Governor Kate Brown for schools in extreme and high-risk counties when she announced contact sports could return last month.

With Multnomah County moving to moderate risk, that requirement no longer applies, meaning both schools will begin the nine-day progression of contact practices Friday afternoon with a goal of playing tackle football games in Week 4.

“We were all up in our seats, ecstatic, hyped when we heard the news,” Eagles sophomore Hayden Boyd said. “We’ve had a lot of heads down because we knew that we probably weren’t going to get a season. We had seniors (15 from last season’s roster) who wanted to play their final year but knew they probably couldn’t until we got that call.

“So, when we finally got the call, we were ready. We’ve had to face challenges all year, but now that we get a season, we’re ready.”

David Douglas coach Cal Szueber had heard last week, when the OHA issued its warning week metrics, that the county was likely to move to moderate status. He didn’t wait until it was made official to tell his team that Wednesday’s game would likely be its only 7-on-7 game this season.

“It was a light at the end of the tunnel — that’s exactly it,” Szueber said. “We’ve been trying to give the kids hope the whole time, saying the numbers keep getting better, just stay with it. Their attitudes have been incredible throughout. They’re just happy to be out here. That’s what makes it fun.”

Now comes the fun for administrators such as David Douglas athletic director Eric Stauffer, who has to line up a Week 4 opponent for his team — as of now, the only game on the Scots’ schedule is Week 5 against Gresham.

First, though, both teams must complete nine days of mandatory ramp-up to become eligible for the contact season. They’ll hold two days of practices in helmets Friday and Saturday, followed by a transition day in helmets and shoulder pads Monday before putting on full pads Tuesday, placing them on track to have all of their practices in place by March 24.

As the Mt. Hood Conference’s football chairperson, Stauffer meets each Monday with his counterparts in the other four Portland-area 6A leagues (PIL, Metro, Three Rivers and Pacific) plus the 5A Northwest Oregon. The five 6A leagues combined have 35 schools, meaning every week this spring, at least one is left scrambling to find an opponent — and that’s before any COVID-19 cancellations.

The NWOC has filled some of the holes, with Parkrose, Canby, Wilsonville and Forest Grove picking up games against 6A opponents, but it’s not always that simple.

For example, this week, it was Lake Oswego that lost the game of musical chairs. After missing Week 1 because of quarantine, if the Lakers cannot find a partner for this weekend, they’ll miss the first two weeks of the season.

One might think Centennial and David Douglas could simply schedule each other that first week, but the Eagles originally had crafted a slate of games in case they opted in. They eventually canceled their first three weeks, but they kept their Week 4 game March 27 against Reynolds.

“Right now, we’re the odd team out that week,” Stauffer said. “But we knew going in that this would eventually happen. As a group, we’re on our seventh different schedule at this point. Hopefully, we’ll find a game.”

Even if it means traveling outside the Portland area to match up with an opponent? Defending 4A state champion La Grande does not have a game scheduled that week on the OSAA website. Stauffer said he will discuss any possible travel with school and district administrators, if needed.

“The kids have done a super job following all the protocols,” he said. “I hope they would allow us to travel.”

But, if it turns out the Scots get only two games because of their decision not to opt in, the ever-optimistic Szueber is OK with it.

“At this point, all this is bonus money,” he said as he exited the stadium. “It’s going to be a challenge, but things change. You never know.”

Linemen looking forward to getting into pads and ‘ready to hit’

Wednesday’s contest began with the lineman challenge, but instead of strength and conditioning drills designed to highlight their skills, they squared off in a 7-on-7 game of their own.

“Linemen don’t get to come out and play 7-on-7 normally,” said Centennial sophomore Alex Hernandez. “We’re all up trying to protect our quarterback, but we’re having fun out here playing 7-on-7, our linemen against their linemen.”

Still, he and his fellow linemen can hardly wait to strap on the pads again.

“We get into pads next week and get ready to hit,” Hernandez said. “It’s exciting. I’m glad we’re able to play.”

Centennial improvising at quarterback after 2019 starter opts out

The JV teams next took the field for their 21-minute segment before the varsity teams played their two halves.

For Self, Wednesday night was the first opportunity to see how Boyd looked at quarterback against another team. Boyd played wide receiver for the JV team last season, but when returning starter Langston Williams-Lomax opted not to play because of family considerations, Self needed to improvise.

“Hayden’s been our quarterback for 2½ weeks,” Self said. “Tonight was the first time facing live bullets, and he did a pretty good job. We got some film on us now, and we can teach from it.”

Boyd looked poised on the Eagles’ final drive, leading them quickly down the 40-yard field for the winning touchdown in the second half of the varsity segment.

“Things are starting to click finally,” Boyd said. “It just feels great to be back out here with my brothers, putting in the work again. It’s been a long time coming.”

The Scots’ quarterback situation is more settled. Senior James Hamann, who was the team’s primary backup last season, has moved into the starting lineup. He split time Wednesday with junior Jeremiah Smith. Another junior, James Hubbard, directed the JV team.

Hubbard likely will back up Hamann this spring before looking forward to another battle with Smith in the fall for the starting job.

“We’re further along than I thought we’d be,” Szueber said. “Tonight was a great way to step into the season.”