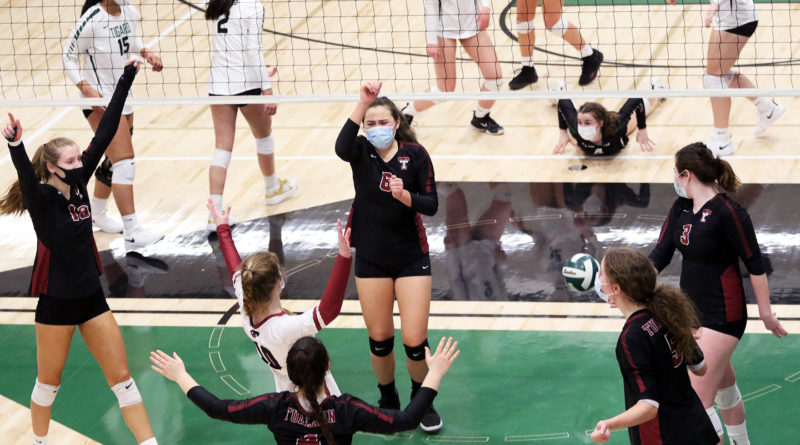 Things are certainly different when it comes to Oregon high school sports in early 2021.

It’s March, and we’re playing volleyball. The players, coaches, officials and fans are all wearing face masks. There will be no state champion, and no state playoffs.

But, despite all the changes, something is still the same — when the rival Tigard and Tualatin volleyball teams face off, it’s going to be a spirited battle, where both squads bring some added motivation to the contest.

On Tuesday, the highly motivated Timberwolves notched an impressive victory over their rivals. Tualatin, after fighting off a strong start by Tigard, came away with a 25-18, 25-17, 25-8 win against the Tigers in a Three Rivers League match played in front of a limited number of spectators at Tigard High School.

“We were super fired-up. On the bus ride here, we were all like, ‘Let’s go!’” Tualatin junior libero Sophia Biehler said. “We were all super pumped up. We came out and won in three, and we were really excited about that.”

“It was good. I think we had a lot of energy and excitement, because it’s our rival,” said Tualatin senior outside hitter/middle blocker Kylie Zralka, who had a big match at the net. “I think we knew we still had to come in with the mindset that we’re both good teams, and you never know what’s going to happen.”

“We pulled out our good serve-receive and hitting, and everything flowed,” Zralka said.

The 6-foot-1 Zralka, who has signed to play at Carroll College in Helena, Mont., is in her fourth season on the Tualatin varsity, and she played like she wasn’t going to take any moment of her senior season for granted.

“I know this season is weird, but we’re making the most of it,” she said. “Anything is better than nothing.”

Tigard moved to 0-3 in league matches. But the Tigers also are thankful to be playing this season.

“Being back in the gym feels good. It feels like the life we once knew,” Norris said. “There was good energy. It didn’t quite carry us through, but it felt good for moments.”

The Tigers, getting points on tips by senior setter Kennedy Peery, a block by junior Ashley Sample, a kill by senior Alexa vanderSommen off a set by Peery and on serve by senior Erin Bullard, jumped out to an 8-6 lead in the opening set.

“We’ve got a good team dynamic going, and we’ve got a lot of really dynamic hitters and a lot of options,” Norris said. “So, when it’s clicking, it’s boom, boom, boom.”

Ace serves by Peery and junior Anna Follett helped Tigard increase its first-set lead to 15-12. But that’s when Tualatin came battling back — in a big way.

Biehler served four consecutive points, with Zralka having a couple of kills in the scoring streak, to help the Timberwolves rally to take a 17-15 advantage.

The Tualatin lead was 18-16 after another kill by Zralka, coming off a set by sophomore Sophia Fast. The Timberwolves pulled away from there. Junior Josie Phillips served three consecutive points, and Fast and senior Olivia Jackson each scored on a tip to help Tualatin close out a 25-18 win in the opening set.

The Timberwolves carried their momentum into the second set. An ace serve by sophomore Andie Valdes, a tip by Zralka, and back-to-back kills by junior Paige Lawton and junior Jamie Jacobs helped Tualatin sprint to a quick 5-0 lead. With Lawton, Fast and Jackson making plays at the net, the Timberwolves pushed the margin to 12-4.

Tualatin didn’t let up. A kill by Phillips, back-to-back kills by Zralka and an ace by Biehler helped give the Timberwolves a 17-7 lead.

But Tigard tried to battle back. A kill by vanderSommen, coming on a set by Peery, trimmed the margin to 22-15, but the Tigers couldn’t get any closer. A kill by Phillips and two blocks by Lawton pushed Tualatin to a 25-17 second-set victory.

Tigard, getting a couple of kills from Follett, took a 2-1 lead early in the third set. But Tualatin, looking to get the sweep, came storming back. Biehler had an ace on her way to serving five consecutive points, giving the Timberwolves a 7-2 lead.

“I just try to put the ball in, to be honest,” Biehler said of her serving success for the night.

Soon after, Phillips served eight points in a row, with Zralka having two kills and junior Stella Fetherston adding a block and a kill during the scoring spree, which increased Tualatin’s lead to 16-3.

The Timberwolves didn’t let up from there. Fetherston continued her big third-set performance with two blocks and a kill. Junior Mikayla Randels added a kill off a set by Fast. Lawton, with a block, and Fast, with a tip, wrapped up the 25-8 third-set victory and the sweep of the match.

“Once we got our serve-receive down, I think we were able to get everything up,” Zralka said.

“Honestly, I think it was just all mental. In practice, we do a lot of things to help us prepare for games like this, and it worked,” Biehler said. “I think we just want to have just a good team bond, and, when we have that good bond, I think it will show up on the court.”

That certainly seemed to be the case Tuesday at Tigard.

“The blocking was fire, it was super good,” Biehler said. “It was so fun. I really had a good time. It was a good game, all around, for everybody.”

Tigard is looking to keep getting better as this revised season continues.

“The mentality has changed a little bit, just because we’re so amped just to be able to play. There was a time where we thought we might not be able to play at all,” Norris said. “It’s been a rough start for us, but we’re out here to win. That’s the goal, as we face really tough teams in our league. It’s a tremendous league, but we feel like we really haven’t shown up at our 100 percent, yet. So, that’s our goal. We want to show up at our 100 percent.”