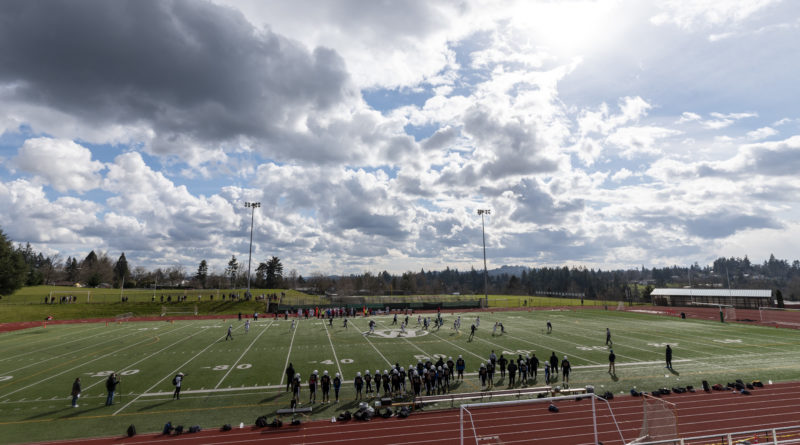 Here are five things we learned during the opening weekend of action.

Defenses typically are ahead of offenses early in a high school football season. After the first week of the 2021 spring season, however, defenses are historically ahead of the game.

Southridge coach Kevin Bickler, whose team posted its first shutout since 2011 with a 35-0 victory at Forest Grove, is one of many coaches not surprised by how dominant defenses were during the opening weekend.

“Not when you consider that some teams were able to practice more than others during the offseason,” Bickler said. “And, most of us didn’t have film on our opponents. So, in terms of our level of preparedness, not only on the field but with film study, that made it difficult going into that first game.”

Even having institutional knowledge of an opponent didn’t mean much, as Newberg coach Kevin Hastin found out as his team won a defensive slugfest with Pacific Conference rival Sherwood, 14-9.

“We were not expecting some of the fronts they ran at us,” Hastin said. “A lot of it was mental. They did things they hadn’t shown us last season.”

Another factor exacerbated by the short lead-in to the six-week season is that offenses didn’t get as many repetitions against live competition. Last weekend marked the third week of what normally would be four weeks of preparation before a season opener — and those four weeks coming after three weeks of spring practice and summer camps.

Instead of participating in a jamboree, which is what most teams play after three weeks of practice, they were thrown into the fire right away.

“It doesn’t matter what scheme you run on offense,” said Grant coach John Beck, whose team beat 2019 semifinalist Barlow 26-0 on Saturday. “Even if you’ve been in that system for years, it’s all about game reps. Defense is instinctual.”

Hastin added, “A lot of offense is about timing, knowing who to block, where to throw or run. On defense, you can play fast, stick to your fundamentals, read your key and fly to the ball.”

All three coaches also agree that soon enough, offenses will catch up.

Beck concurred with that assessment.

“Teams that didn’t click on offense that first week, they’ll start scoring way more points soon,” he said. “Defenses will wreak havoc for a week or two, but it’s going to even out. In a couple more weeks, teams like West Linn, you’ll see them clicking, and in the next two or three weeks, they’ll be putting up 40-50 points.”

For one night, at least, offseason changes Bickler made regarding philosophy paid big dividends in the Skyhawks’ season-opening victory.

In his first three seasons at Southridge, Bickler played most of his best players both ways, wanting to have an explosive offense that exploited its athleticism to outscore opponents. What he found, though, is that all that did was wear out his players, leading to fourth-quarter collapses.

This year, he decided he’d put most of his eggs in the defensive basket and use his best athletes on that side of the ball, only occasionally having them take snaps on offense.

“That would give more kids an opportunity on offense, and we could play physical, hard-nosed defense with our best athletes,” said Bickler, whose program has not had a winning season since 2013.

Two of those athletes are twins Kyle and Kaleb Moxley, who starred two seasons ago as sophomores at Aloha before transferring in the summer of 2019. Kyle, though, blew out his knee in a non-contact drill during two-a-days that summer, ending his season before it started.

Friday against Forest Grove, he dominated in his return, making 11 tackles, a sack and four hurries. Kaleb had seven tackles and received six carries as a backup tailback, running for two touchdowns.

“Having two linebackers who can cover with speed makes a huge difference in our productivity,” Bickler said.

“We were able to develop some continuity with our terminology and schemes,” Bickler said. “That makes a big difference in our kids being confident with what we do.”

3. Grant, Jefferson are the class of PIL — again

When North Portland rivals Grant and Jefferson meet April 3, a PIL title won’t be on the line as it was a season ago.

But Week 1 definitely showed the Generals and Democrats are again the class of the league. While Jefferson dominated defensively but struggled offensively in a 13-0 victory over Lincoln, Grant overcame a slow start to gradually take control in its victory at Barlow.

The Generals scored on an 18-yard pass from Logan Going to Jorell Bigham three seconds before halftime — one of three touchdown passes for Going.

They posted their first shutout of a non-PIL opponent since 2011 and scored a second-half touchdown on defense on Max von Arx’s interception return.

“We have a lot of veteran players, a lot of two- and three-year starters,” Beck said. “Our offensive execution wasn’t where we want it to be, but by Week 3 or 4, we’ll start to see things click.”

4. Newberg would have been a title contender if playoffs had taken place

We knew our shortlist of would-be 6A title contenders if spring 2021 had a postseason would include the likes of West Linn, Mountainside, Lakeridge and defending champion Central Catholic.

We know the Tigers have never reached a championship game, have made only one semifinal appearance (1960) in the 80 seasons the OSAA has held a state championship, and last made the quarterfinals in 2000.

But this was a season Hastin had built toward since taking over in 2017, and their victory over Sherwood put them squarely on the map. A year after allowing 13 points per game — fewest by a Newberg team since 1994 (8.8) — the Tigers looked even more dominant against the Bowmen, giving up points only on a kickoff return and a safety deliberately taken with four minutes to play when backed up deep in their territory.

“We just played fundamental football on defense,” Hastin said. “We knew coming into the season that our defense would be the strength of our team. We didn’t change what we do. We just played hard-nosed football and let the kids play.”

5. West Linn is what we thought it’d be — the (would-be) state title favorite

After the Lions put the finishing touches on their season-opening 37-6 victory over his Tualatin team, Timberwolves senior receiver Jake Alton was impressed.

“They’re actually a really fun team to play,” he said. “They’d go really far if we had playoffs this year.”

Lions coach Chris Miller had hoped his team would get the chance to prove Alton correct, but the OSAA quashed that dream when it decided not to have any type of state championship as part of the culminating week this spring.

That leaves the Lions finding other ways to motivate themselves and finding vindication during this shortened season.

“We just want to go 6-0,” said senior Gavin Haines, who ran for 106 yards and three touchdowns. “We’re pretty confident we’re the best team in the state, so we want to come out and dominate every game and show that we are.”

What distinguishes the Lions from other would-be title contenders is their team speed.

“We have a really fast team all around,” Haines said. “Even our linemen are quicker than most, so that’s helpful.”

That speed really showed on defense, where the Lions held Tualatin to 123 yards of total offense, with 65 coming on its final drive when the Timberwolves scored their lone touchdown on Casey Raz’s 2-yard run with 1:47 to play.