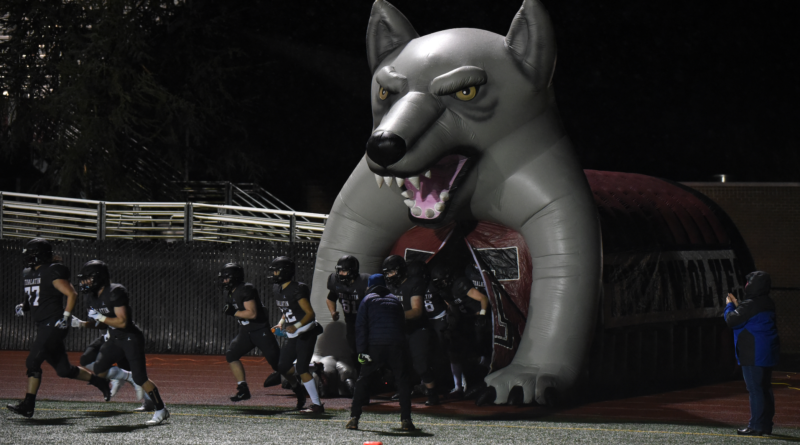 It certainly wasn’t the outcome Tualatin was hoping for in Friday’s season opener.

But, following their 37-6 home loss to powerhouse West Linn, the Timberwolves still had smiles on their faces.

That’s because they know they appear to have a bright future and because, maybe even more, they were happy they got to play after a 16-month layoff since their last game.

“This was the coolest thing ever,” Tualatin senior receiver/defensive back Jake Alton said. “Just going to school has gotten repetitive. And having practice upon practice, not knowing if we were going to have a season, and we finally got to play a game, so there’s nothing better.”

Tualatin is coming off a 2019 season in which the Timberwolves went 9-3 while reaching the quarterfinal round of the Class 6A state playoffs, where they lost a 42-28 thriller at Jesuit.

But Tualatin graduated a strong group of seniors from that team, including Class 6A defensive player of the year John Miller, who signed to play at Oregon State, Luke Marion, who signed with Utah State, and Kainoa Sayre, who moved on to the Air Force Academy.

That left the Timberwolves with a team that included a lot of talented but inexperienced and unproven players entering the revised 2021 spring season.

“We have a super-young team,” Tualatin junior receiver/defensive back Cole Prusia said.

Added Alton: “We have a lot of young guys on the team, who’ve never played a varsity game before.”

That said, the Timberwolves seem to have plenty of optimism on their side as they look not only at the rest of this season, but the upcoming fall 2021 campaign.

“Honestly, I think we’re just building team chemistry,” Prusia said. “We’re bonding as a team and building a family culture, because that’s what it’s all about here at Tualatin.”

“We’re trying to accomplish just becoming a better team,” Alton said. “We want to do that individually in what we’ve been practicing week after week, and see how much better we can become in a six-week season.”

In Friday’s opener, Tualatin did show some promise.

The 6-foot-3, 200-pound ultra-quick Prusia showed he has big-play potential on both sides of the ball. On offense, Prusia had a team-high five catches for 32 yards. On defense, he made a spectacular diving interception late in the second quarter.

“It seems like West Linn was just keying on me the whole game, but I transitioned and got some passes and got the run after the catch,” Prusia said. “But I mainly transitioned it to the defense, and got that pick in the second quarter.”

Junior defensive end Jackson Biedritzky had a sack and another tackle for a loss. Junior linebacker/tight end Max Clanton had a crunching quarterback sack for an 8-yard loss, coming on a third-quarter blitz, and a pass reception.

Tualatin started a couple of juniors on the offensive line in Lucas Edwards and Nico Webb.

The Timberwolves also showed a never-say-die attitude, as they turned their final possession into a 65-yard scoring drive.

Junior running back Scott Wright shined for Tualatin during the drive, gaining 55 yards on six carries. Junior fullback Casey Raz capped the drive with a 2-yard touchdown blast. Raz, who looks to be a key player for Tualatin on both sides of the ball this season, also had two tackles for losses from his linbacker spot on defense.

Tualatin is tentatively scheduled to be back in action Friday, March 12, at Lake Oswego. The Lakers’ scheduled season-opening game at Tigard on Friday was canceled because of a COVID-19 outbreak in the Lakers’ program. If Lake Oswego isn’t cleared to play Friday, it is rumored that the Timberwolves could face North Medford instead.

No matter the opponent, they’ll likely be going up against a fired-up Tualatin squad.

“We’re going to take it to (them),” said Alton, who had two catches for 16 yards against West Linn. “In practice this week, we know exactly what we have to work on. Everyone has their individual things to work on, so practice will just make us better.”