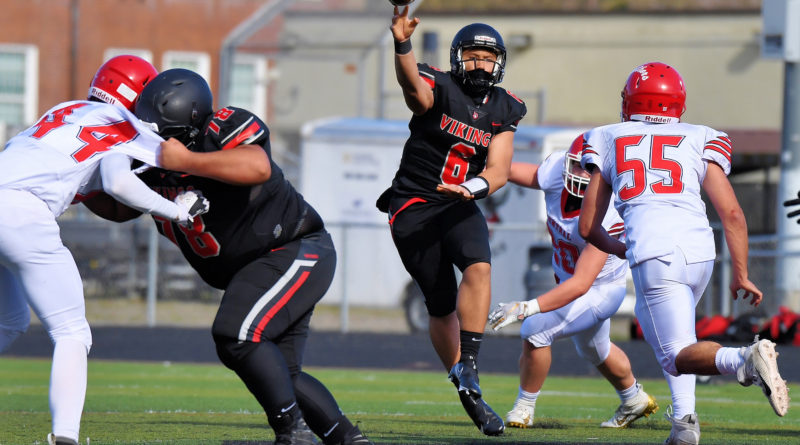 North Salem 20, Central 0: Clayton Hinton-Welty racked up double-digit tackles and had two interceptions as the spearhead of a Vikings defense that made the difference in the victory over the visiting Panthers of Independence.

North Salem freshman quarterback TC Manumaleuna won his first game as a starter, though the phenom termed his stat line “terrible.” Manumaleuna, who received a scholarship offer from Oregon before his freshman year, completed his first two passes and totaled about 75 yards through the air. He was intercepted twice — once, he said, after the ball slipped out of his hand, and another when his receiver fell down.

“But it was so much fun to be out there,” he said. “Varsity ball is the best.”

Manumaleuna, who also is being recruited by USC and BYU, acknowledged he was nervous before his high school debut.

“I started to think of all the practices and work I put in and realized it was all for today,” he said.

“But once I settled in, the offense started clicking, and I think we had some solid, textbook drives.”

First-year Central coach Joel Everett cited the Vikings’ defense as North Salem’s strength in Week 1. All of the Panthers’ trips inside North Salem’s 20-yard line came up empty, including one drive that reached inside the 1 just before halftime and another possession that reached the 2.

North Salem’s Josiah Davis surpassed 100 yards rushing and ran for two touchdowns, and Anthony Valdez gained another 50-plus yards and scored a touchdown on the ground.

Nevin Zeller had an interception for North Salem, and Isaiah Rico and Isaiah Razo each had two sacks.

North Salem won its season opener for the first time since 2011. The Vikings ended the game in victory formation — a “play” that earlier in the week Manumaleuna had joked the team was implementing into the offense.