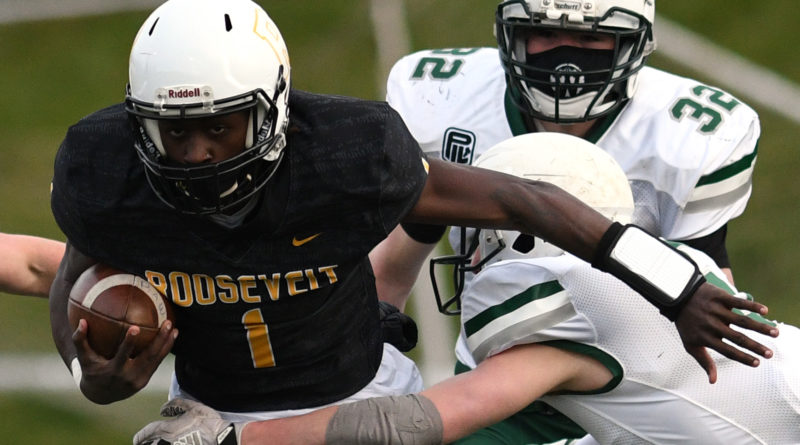 Oregon State signee Damir Collins ran for two touchdowns — including a 74-yard burst in the first quarter — and the Democrats of North Portland defeated the Cardinals at Wilson High School in Southwest Portland.

Brady Kopetz was the top rusher for Lincoln of Southwest Portland, picking up 55 yards. Lincoln was held to 181 yards of total offense.

Trejon Williams turned in one of the highlights for Jefferson’s defense, making a one-handed interception and returning the ball 42 yards. Caleb Harvey had another interception, and Jeremiah Matthews was in on 11.5 tackles.

In Houston Lillard’s debut as head coach, Jefferson posted its third shutout in its past eight games. Two seasons ago, the Democrats allowed more than 54 points per game.

As debut performances go, Jackson Flatner’s will be hard to top.

In his first game of organized football, Flatner caught five touchdown passes, including the game-winner with about 90 seconds left, to push the Roughriders past the host Trojans in Southwest Portland.

Wilson (the school is in the process of having its name changed to Wells) pulled even at 32-32 near the midway point of the fourth quarter on the second of Jayden Brannan’s two rushing touchdowns.

The second score by Brannan, who has signed with Portland State, was the culmination of a Wilson comeback after Roosevelt of North Portland had taken an early 18-0 lead. Wilson got on the scoreboard soon before halftime to make it 18-8.

Among Wilson’s other touchdowns was a fumble return of 80 yards by Rolin Griffiths and a 40-yard pass from Parker Feld-Gore to Davis Dufort.

Imarion Kelly threw for all five of Flatner’s touchdown catches, threw another to TJ Jackson and contributed to Roosevelt’s running game. Jackson, in addition to being a factor in the passing game, returned the kickoff after Brannan’s second score to put the Roughriders in position for the go-ahead touchdown.

After Flatner’s final score, Francis Kalamafoni came up with a sack on third down that put Wilson into a fourth-and-19 situation.

The game marked the debuts at their respective schools of two coaches: Ryan McCants at Roosevelt and Keith Bennett at Wilson. McCants most recently was an assistant at Lincoln of Southwest Portland, and Bennett was most recently a head coach in 2018, at North Marion in Aurora.

Senior running back Tavon Wilson rushed for all three of the Senators’ touchdowns, and junior linebacker Ryan Joseph forced a fumble on the Warriors’ overtime possession to seal the victory at Franklin High School in Southeast Portland.

The victory ended an 11-game losing streak for the Senators of Northeast Portland. Their most recent win had been a 30-24 victory in Week 6 of 2018 — on that same Franklin field, over the host Lightning.

Cleveland quarterback Logan Geiszler, who passed for three touchdowns in all of last season, threw touchdown passes to Daniel Suhr and Jayden Gumm.

Senior defensive backs Will Cabello and Caleb Morales-Corey had interceptions for Madison, which had five takeaways.

The game was the debut at Cleveland of Southeast Portland for Bill Smith, a veteran coach in the Portland area who spent 14 seasons on the Madison staff.

Logan Going passed for three touchdowns and Max von Arx returned an interception from near midfield for a touchdown, boosting the Generals to the victory in Gresham over the host Bruins.

Going’s 18-yard connection to Jorell Bigham with three seconds left in the first half opened the scoring. Brennick Beck and Timon Davis were on the receiving end of Going’s other scoring passes.

Barlow, which lost 22 seniors from its 2019 OSAA Class 6A semifinal squad, was shut out for the first time since September 2016, when Clackamas won 35-0 in the Bruins’ fifth game of the season.

Junior quarterback Jakoby Moss passed for three touchdowns, sparking the Cougars of Northeast Bend to the victory over the host Storm on the west side of the Deschutes River.

Hunter Leeder caught two of Moss’ scoring passes, and Jake Hatch was on the receiving end of the other. Luke Roberts also had a touchdown for Mountain View.

Moss tied his career high with three touchdown passes — a feat he accomplished in his sophomore season opener, a 33-30 loss at Roseburg 18 months to the day before Saturday’s game.

Zander Garner’s 36-yard screen pass to Joel Beltran midway through the fourth quarter proved to be the decisive touchdown in the Lightning’s victory over the Gophers at Franklin High School in Southeast Portland.

Garner ran for a touchdown for Franklin’s other score in the team’s first home-field victory since October 2017.

Gresham took the lead when senior Ethan Evans covered the ball in the end zone for a safety and a 2-0 advantage. After Garner ran for his touchdown, Evans scored on a 22-yard pass from junior quarterback Zack Kaufman for a 9-7 lead early in the fourth.

Evans finished with five catches for 78 yards and the touchdown. Kaufman’s completions included a 44-yard connection with Evans and a 32-yarder to senior Lucas Simmons.

Gresham senior cornerback Dawson Whitten had three interceptions, a number matched by only four players in 2019 Oregon Class 5A and 6A football.

Jackson Lowery’s second touchdown run, on a fourth-and-goal play from the 1, staked the Class 6A Titans to a 21-0 second-quarter lead, and West Salem went on to victory over the visiting Foxes.

Class 5A Silverton got on the scoreboard 26 seconds before halftime on Jordan McCarty’s quarterback sneak from the 5, making the score 21-7.

Nate Garcia ran 12 yards off right tackle for the Titans’ first score, with 3:36 left in the first quarter.

The Class 6A Cavaliers got two touchdowns through the air from one quarterback, two touchdowns on the ground from another and a strong effort from their defensive unit in the victory over the Class 5A Cougars in Canby.

Clackamas’ defense gave up one touchdown (Canby’s other touchdown was on special teams) to a team that averaged more than 24 points per game and scored 77 in its final two games in 2019.

The Cavaliers, who intercepted three passes all of last season, got two Saturday: one each from Kemeatrous “KJ” Johnson-Gibson and the other from his brother, Keontae Johnson-Gibson. Clackamas held Canby scoreless after taking an 18-15 halftime lead.

“I can’t say enough about our defense,” said James Holan after his first game as the Clackamas coach.

Canby’s Chance Miller returned a kickoff for a touchdown, and Tyler Mead’s nine-yard run accounted for the Cougars’ other touchdown.

Holan also was happy with the team’s running game, a performance triggered by an offensive line featuring only one senior starter.

Defense was also emphasized by Canby coach Jimmy Joyce, who said his team’s offense didn’t see the field much in the second half.

“I’m really proud of our defense,” he said in a text message. “They played a lot of minutes, especially in the second half.”

Austin Carter, moved from quarterback to running back for his senior year, rushed for four touchdowns and approached the 200-yard mark in the Panthers’ win over the visiting Lava Bears.

Redmond posted its first shutout since Oct. 30, 2015, when the Panthers defeated fellow Redmond school Ridgeview 48-0 in their regular-season finale.

Clayton Hinton-Welty racked up double-digit tackles and had two interceptions as the spearhead of a Vikings defense that made the difference in the victory over the visiting Panthers of Independence.

North Salem freshman quarterback TC Manumaleuna won his first game as a starter, though the phenom termed his stat line “terrible.” Manumaleuna, who received a scholarship offer from Oregon before his freshman year, completed his first two passes and totaled about 75 yards through the air. He was intercepted twice — once, he said, after the ball slipped out of his hand, and another when his receiver fell down.

“But it was so much fun to be out there,” he said. “Varsity ball is the best.”

Manumaleuna, who also is being recruited by USC and BYU, acknowledged he was nervous before his high school debut.

“I started to think of all the practices and work I put in and realized it was all for today,” he said.

“But once I settled in, the offense started clicking, and I think we had some solid, textbook drives.”

First-year Central coach Joel Everett cited the Vikings’ defense as North Salem’s strength in Week 1. All of the Panthers’ trips inside North Salem’s 20-yard line came up empty, including one drive that reached inside the 1 just before halftime and another possession that reached the 2.

North Salem’s Josiah Davis surpassed 100 yards rushing and ran for two touchdowns, and Anthony Valdez gained another 50-plus yards and scored a touchdown on the ground.

Nevin Zeller had an interception for North Salem, and Isaiah Rico and Isaiah Razo each had two sacks.

North Salem won its season opener for the first time since 2011. The Vikings ended the game in victory formation — a “play” that earlier in the week Manumaleuna had joked the team was implementing into the offense.

Gannon Jeter piled up more than 150 rushing yards and two touchdowns, Eli Millington returned a fumble from near midfield for a touchdown, and the host Ravens defeated the Kingsmen of Milwaukie.

Ridgeview of Redmond had more than 325 yards of total offense. The Ravens posted their first shutout since their first game of the 2013 season, which ended with them winning the OSAA Class 4A championship.

Putnam forced two turnovers in a defensive showing led by the Kingsmen’s secondary. Nineteen of Putnam’s 22 starting positions were fielded by sophomores or juniors.

The Mustangs got a huge game from Sean LaChapelle in defeating the host Cheesemakers and ending an 11-game losing streak.

LaChapelle, a 6-foot-4, 200-pound junior, had 12 tackles, an interception and a fumble recovery on defense. On offense, he tallied 80 yards and a touchdown receiving for the Mustangs, who are playing a Class 4A schedule.

Tillamook, which led 13-0 in the first half on the strength of Miquel Niemi’s two rushing touchdowns, was forced into five turnovers by Milwaukie. Niemi left the game with an injury.

Sophomore Kaden Harris scored on a quarterback sneak in the third quarter for Milwaukie’s go-ahead touchdown.

Dom Montiel passed for three touchdowns, Miguel Velazquez ran for two, and the visiting Pirates of Coos Bay took an early lead and kept the Eagles at arm’s length.

Stayton, which started eight sophomores and has two seniors on its roster, was within 17-13 after a touchdown run from near midfield, but the Pirates reeled off the next three touchdowns to seal the win.

Stayton coach Randy Nyquist tipped his hat to the talent of Marshfield and praised his players for their fight.

“I like the way our kids stuck with it,” he said.