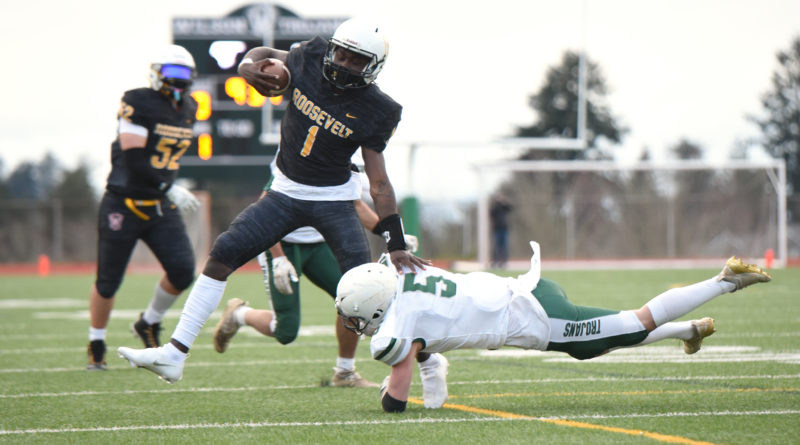 Roosevelt’s season got off to a thrilling start Saturday with a come-from-behind 38-32 road win against Ida B. Wells (formerly Wilson) in Southwest Portland.

Some 484 days after their last game, the Roughriders built an 18-0 lead, saw it evaporate over the second and third quarters, then scored 20 points in the fourth to finally topple the Trojans.

In his first football game ever, Roosevelt junior Jackson Flatner had five touchdown catches — all from classmate Imarion Kelly — including the winning grab late in the fourth quarter.

First-time head coach Ryan McCants — a former running back for Oregon State and assistant at Lincoln — said he was proud of the way his team performed.

“They put in a lot of work learning and getting to this point,” McCants said. “It’s a very motivated group. That tenacity they have off the field carries into the game and into crunch time.”

The Roughriders appeared dominant early but fell more and more out of sync as the Trojans cut into their lead.

With the margin down to two points but with their offense in the red zone, the Roughriders snapped the ball over Kelly’s head in the third quarter, and Wells senior Rolin Griffiths returned the fumble more than 80 yards for a touchdown that gave the Trojans their first lead.

Kelly said the team had to come together and refocus before the game got out of hand.

“We were like, ‘Hey, this is not us, we’re not playing like our normal selves,’” said Kelly, who threw a sixth touchdown pass to TJ Jackson.

“I know we have more potential than how we played today. We messed up a lot.”

“It was obvious we’ve had a long time off from football,” McCants said.

“This pandemic has been like nothing any of us have ever experienced,” he added. “To step in as a new head coach and not get to meet your players for a few months, be in the weight room, put in the work you know you need to leading up to the season — that was pretty difficult.”

Wells coach Keith Bennett — also in his first year with his school — agreed, saying his team had to learn a whole new system in essentially two weeks.

“These kids’ abilities to show up and adjust and come out and play through all that we’ve had to go through is absolutely amazing,” Bennett said.

“They’re both kind of similar,” Kelly said. “They want to put in the best they possibly can at all times.”

Flatner said McCants “got us right and ready” for their first game.

McCants, who got into education in 2012 and has a master’s degree in teaching, said he didn’t always know he wanted to be a head coach, but after he got a taste as an assistant at Lincoln, he just needed to find the right place.

“Luckily, Roosevelt has been that for me,” he said. “Being around these kids, coaching them up, how much they love to work — it’s just a pleasure. I’m so happy to be here. I love these players and this community and the coaching staff.”

Roosevelt’s next game is Saturday, March 13, against Grant. When asked what the team can improve on in practice before then, McCants said, “Oh my goodness.”

“Pass protection, getting our run game together; defensively, we’ve got to communicate,” he said. “Little things like communicating who needs to be on the field, hustling to the line to set up, little holding penalties, cleaning up a lot of details.”