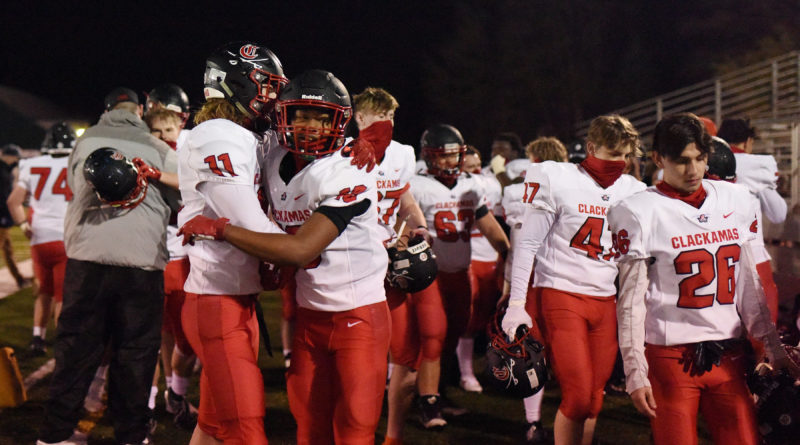 It felt like an eternity for the Clackamas football team.

In reality, it was 484 days since the Cavaliers last took the field in the first round of the Class 6A state playoffs — a 17-7 loss to Mountainside. They’d been eager to erase the sting from that loss ever since.

“I mean, we’ve waited 400-some days for this,” senior quarterback Jack Artman said after Saturday night’s 32-15 road victory over Canby in their season opener.

“It was amazing. Awesome. I’m speechless.”

The Cavaliers, who just three seasons earlier won the program’s first state championship, suffered through what they felt was a lost 2019 season that ended with their first losing record since 2012.

James Holan was brought in as head coach last March to revive a culture of winning developed under Joe Bushman.

“For sure, we really want to create that culture,” Artman said. “Last year, that was kind of lost. A culture of Clackamas. A culture of winning. We brought in a new head coach, and we love him to death. He’s a great guy.”

Senior receiver Nick Kennewell agreed that Holan already has done a lot in a short amount of time to reverse the downward spiral the program was in at the end of 2019.

“Man, there’s so much different,” said Kennewell, who caught four passes for 87 yards and a touchdown Saturday. “Respect is one thing. It’s completely different. We have so much respect for this guy (pointing toward Holan). Our coach last year wasn’t really saying much, but this guy gives us suggestions on everything we do, critiques everything. It’s a lot better.”

Holan acknowledged that much of his offseason work has dealt with creating a culture, but not necessarily the one that previously existed.

“Coach Bushman was a phenomenal coach and did a phenomenal job,” Holan said. “But what we want these kids to do is write our own legacy. It’s what we talk to the seniors about every week — what is your legacy going to be? What are you going to leave for the next group? We want to build a foundation for the program we want to have for many years to come.”

If anyone can understand what Holan is trying to achieve at Clackamas, it might be his counterpart on the other sideline. Jimmy Joyce arrived at Canby after the once-mighty program endured a winless 2018 campaign that was its first since 1975.

The winless streak reached 22 games before the Cougars won back-to-back games to close 2019, meaning they had an additional seven days (491, to be exact) to wait to finally take the field.

“We’re still a really young football team,” Joyce said. “We’re still in the process of installing an offense, from even last year, building off stuff. We had 491 days of rust to break off, and we showed a lot of rust, but the good news is that the film is going to show a lot of things we can fix. We’ve got a short turnaround, so we’ve got to get back to work tomorrow.”

The rust especially showed on offense for the Cougars, whose longest play from scrimmage was their only offensive touchdown — a 10-yard run by Tyler Mead late in the first half that closed their deficit to 18-15 going into halftime.

In the second half, though, they turned the ball over twice and held the ball for just 11 plays and less than five minutes.

“Our defense showed a lot of character,” Joyce said. “They were out there for all but 11 plays the entire second half and did not back down. That’s pretty impressive.”

The Cavaliers also showed some rust early, but eventually Artman found a bit of a groove while sharing time with classmate Jaxon Shaw at quarterback.

Artman finished 8 of 21 for 178 yards and two second-quarter touchdowns. Shaw played as more of a single-wing quarterback, running six times for 25 yards and two scores and completing two of his three passes.

“Whatever my role was going to be, I would do it to my fullest,” Artman said. “The two-quarterback approach, though, me and Jaxon — I threw for two touchdowns, he ran for two touchdowns. It worked great tonight.”

Holan saved his praise for a defense that held Canby to 72 yards and five first downs (three by penalty). The Cougars’ only other touchdown was an electrifying 90-yard kickoff return by Air Force recruit Chance Miller following Shaw’s first touchdown run midway through the first quarter.

“The defense played absolutely lights out,” Holan said. “These guys did a great job of competing tonight. It was awesome seeing them have some adversity and fight through that. That’s what it’s all about. I want a team that’s resilient.”

The Cavaliers scored touchdowns 70 seconds apart in the second quarter to take the lead for good. Artman hit Kennewell down the right seam for the first score from 35 yards, then after forcing a quick three-and-out, Ryan Lewis got behind the cornerback on the left sideline and Artman hit him in stride for a 76-yard strike.

The Cavaliers held the ball for more than eight minutes to start the second half but were denied by a goal-line stand. Two plays later, sophomore Keontae Johnson-Gibson jumped an out route to intercept a pass at the Canby 20, and it took Clackamas five plays to take a 24-15 lead on Shaw’s 5-yard run.

Miller gave the Cougars one last spark with a 37-yard punt return to the Clackamas 39 early in the fourth quarter. A fourth-down sack by Kaden Ludwick doused the spark, and the Cavaliers then marched 59 yards in 10 plays against a tired Canby defense to salt away the win on Jake Spitulski’s 7-yard touchdown run with 3:42 to play.