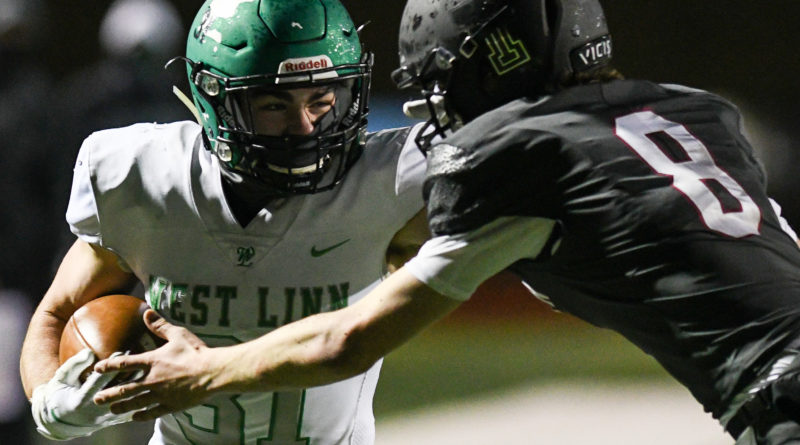 For the West Linn football team, it was quite a night.

It was emotional, it was rewarding, it certainly was impressive and, well, maybe Gavin Haines succinctly summed it up best.

“This literally felt like a dream come true,” Haines said with a big smile on his face.

Haines, a senior running back on the West Linn squad, and his Lions teammates got their revised season off to an astonishing start, as they sprinted to a 37-6 win over Tualatin in a Three Rivers League opener Friday at Tualatin High School.

“It’s so big,” said Haines, who ran for three touchdowns in the victory. “We’ve been waiting for this for 16 months. Our senior group is so dedicated and tight-knit. We were devastated when we couldn’t play in the fall, and we’ve been pressuring the OSAA, and Tweeting about it, and our parents have been helping, and to finally come out here and play a game was really special.”

“First game — we had about eight padded practices. Our guys were flying around out there, making plays, playing hard,” said West Linn senior Blake DeBisschop, who threw for 311 yards. “Our defense did a phenomenal job, giving us the ball back. Our O-line did great, and Gavin Haines is an animal. You give him the rock, and special things are going to happen.

“It’s going to be a good year, and we’re excited with what we’ve got.”

With the victory, West Linn, which has all the appearances of a would-be Class 6A state championship contender, got its season off to a 1-0 start. Of course, with the revised season, which was postponed from the fall because of the COVID-19 pandemic, there won’t be any Class 6A state champion, or even any state playoffs. But that hasn’t stopped the talented Lions from setting some lofty goals.

“We just want to go 6-0,” Haines said. “We’re pretty confident that we’re the best team in the state, so we want to come out and dominate every game and show that we are.”

Meanwhile, the young Tualatin squad got its revised season off to an 0-1 start, but the Timberwolves are anything but discouraged.

“I felt like, even though they kept scoring on us, that our defense played so tough,” Tualatin senior defensive back/receiver Jake Alton said. “It’s the little things we need to work on. It’s just Week 1 type of stuff.”

“It was the first game of the year,” said Timberwolves junior receiver/defensive back Cole Prusia, who had five receptions on offense and an interception on defense. “We haven’t played in 16 months, so we didn’t have any film on them. So, we just kind of schemed for everything we had.”

But, no matter what, both teams were just happy to be playing on Friday night, even if it was in a stadium totally devoid of fans.

“Before the game we were all saying that it felt like a dream, and we were going to wake up and say, ‘Oh, damn,’” Haines said with a laugh. “We’ve been waiting for so long, and to finally get out here and play was great. It was tough with no fans here, but, if we get the opportunity, obviously we’re going to take it.”

“Having not played in about 16 months, something like that, I’ve been dying to get on the field,” DeBisschop said. “It’s finally all here, and I want to soak it all in — my senior year. I just want to have a good time with my friends.”

“I think we’ve been waiting for 16 months, so this was the best thing that could happen,” Prusia said. “Win or lose, I’m happy I got to come out here and just ball with my guys. Honestly, it was the most memorable night of my life.”

On the next play, Haines, running behind the Lions’ powerful offensive line of senior Zach Holmes, junior Eric Mee, senior Kyle Dramov, junior Jake Rams and senior Darren Wiancko, among others, shook off a hit in the backfield to sprint 19 yards for a touchdown, giving West Linn a 7-0 lead with 8 minutes and 34 seconds to play in the first quarter.

DeBisschop and senior receiver Clay Masters took over for the Lions on their next possession. The two teamed up for a 13-yard connection and then, on the next play, Masters made a leaping catch in heavy traffic for a 34-yard gain to the Tualatin 18-yard line. Five plays later, Masters made a diving catch of a deflected pass, grabbing the ball right before it hit the turf, for a 9-yard touchdown, giving West Linn a 14-0 lead with 33 seconds left in the first quarter.

The Lions’ defense then got into the act. An interception and a 22-yard return by senior defensive back Brenden Crouse helped set up a 22-yard field goal by senior Tommy Weltchek, which increased the margin to 17-0 with 10:00 remaining in the second quarter.

Tualatin, trying to battle its way back before halftime, got a 10-yard run from sophomore Kevin Interian, back-to-back completions from junior quarterback Jackson Jones to Alton and a spectacular interception by Prusia right in front of the West Linn bench, but the Timberwolves still found themselves trailing 17-0 at the intermission.

Still, the Lions were far from satisfied.

“At the beginning of the game, we had a few errors, bad snaps and stuff, but we got that together, talked about it at halftime and played strong in the second half,” Haines said.

West Linn opened the scoring in the third quarter with a 62-yard pass play from DeBisschop to senior tight end Kaanan Huffman, making the score 23-0 with 8:35 left in the period.

Tualatin, still fighting, was able to avoid the shutout. Junior Scott Wright had runs of 10, 9, 20 and 14 yards to set up a 2-yard touchdown run by senior fullback Casey Raz, who powered his way into the end zone with 1:47 remaining, making the final score 37-6.

“This was so fun. It was the most fun I’ve had in a whole year,” Haines said. “We haven’t really been able to do much. We’ve just hung out in small groups, so to come out and have this opportunity was a blessing.”

DeBisschop completed 19 of 32 pass attempts for 311 yards with two touchdowns and one interception.

“This was a fun one,” he said. “We had to be our own fans on the sideline and create our own energy. It was a great night.”

“It was fun,” Haines said of his three touchdowns. “A running back can’t do anything without his line. Our receivers were blocking well, and our tight ends also were. Everything was clicking, and I give all the praise to them.”

For the Lions’ defense, Crouse had an interception, junior Earl Ingle had a fumble recovery and senior Thomas McNamara and Huffman each had a tackle for a loss.

For Tualatin, Wright ran for 58 yards on seven carries, all in the second half. Interian rushed for 20 yards on five carries.

Jones completed 10 of 21 pass attempts for 61 yards. Prusia had five catches for 32 yards and Alton had two receptions for 16 yards. Junior Kellen Hale, junior Max Clanton and Interian each had one catch.

“We lost, but this is the most fun that I’ve had in a while. There’s nothing like getting out there and playing football with the boys,” Alton said. “This was a great time. They’re actually a really fun team to play. They’d go really far if we had playoffs this year.”