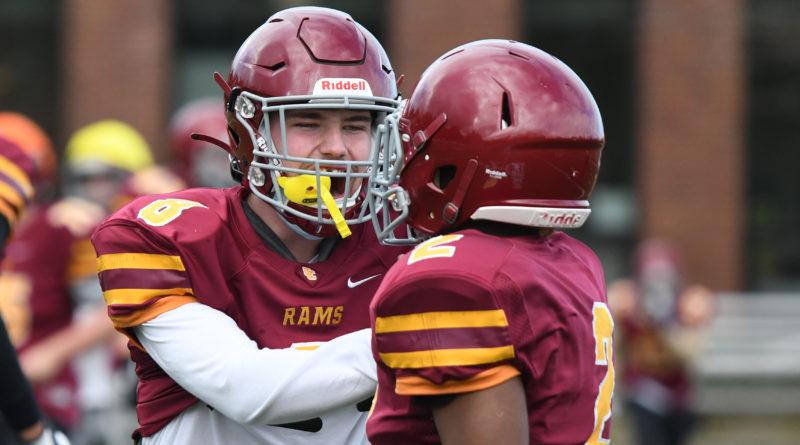 The Central Catholic football team won’t get the chance to properly defend its Class 6A state championship this spring.

On Friday night, though, the Rams got a pretty special consolation prize, rolling to a 35-6 Holy War victory over rival Jesuit at Hillsboro Stadium.

“Our kids always get up to play Jesuit,” said Rams coach Steve Pyne, whose team ended a two-game losing streak in the series. “At the end of the day, though, we just wanted to come out of this game 1-0.

“And, we kept our winning streak alive.”

The Rams graduated 10 starters on offense from last season’s championship team but got big games from several newcomers.

“It was a really good first varsity start for Luke,” Pyne said. “He showed some really good composure and stood in the pocket really tough.”

Johnson threw three touchdown passes in the second quarter, including two to King, as the Rams built a 21-0 halftime lead. Jesuit closed the gap early in the third when Michael Rincon escaped a tackle in the backfield and raced 59 yards for the Crusaders’ only score.

Jesuit got inside the Rams 10-yard line on three occasions in the second half, only to be denied each time — the last ending with Myles Broadous returning an interception 92 yards for a touchdown in the final minute.

“We started slow and made some mistakes against a really good team,” Crusaders coach Ken Potter said. “But the second half, we came out and played much better. We just didn’t capitalize on some opportunities where we could have made the game closer and put some pressure on them.”

The Crusaders also were starting with nearly a blank slate after last season’s run to the state semifinals. They return only two starters on offense — senior offensive linemen Charlie Pickard and Declan Quillin — and one on defense, senior free safety Mason Masterson, who left the game in the first quarter with a shoulder injury.

“I was not disappointed with the kids’ effort tonight,” Potter said. “That was typical of a team with three kids who have varsity experience and with most of the team making its first varsity snaps. The kids responded and got better as the game went on.”

Rincon finished with a game-high 162 yards on 23 carries, but as a team, the Crusaders gained just 220 yards on the ground — less than half the 483 they amassed in the teams’ last meeting.

“It was a great team defensive effort,” Pyne said. “Our front seven was great, and our secondary did a great job forcing things back inside when they got to the perimeter.”

Junior Tatum Lewis, making his first start under center for the Crusaders, was 7 of 19 for 103 yards and two interceptions. Darius Mims was their top receiver with three catches for 27 yards.