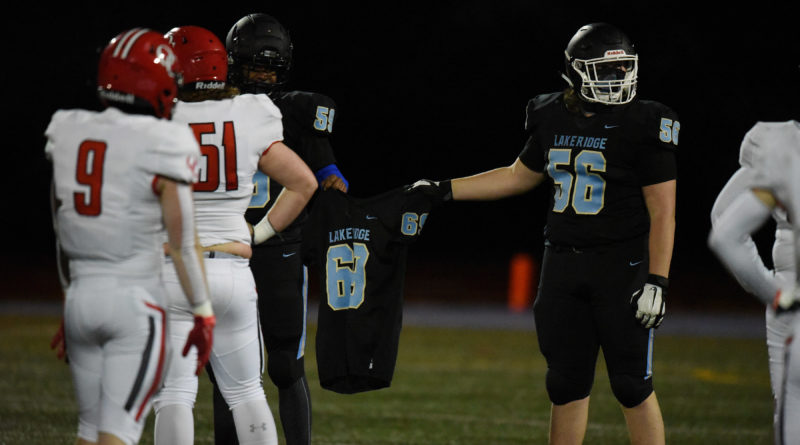 The Lakeridge football team had spent the past 10 days processing the suicide of sophomore lineman Ezekiel Crowder while also preparing for its long-awaited season opener against Oregon City.

Friday night, they spent a poignant moment commemorating their beloved teammate with the “missing man” formation, holding aloft his No. 69 jersey while taking a delay of game penalty.

“That first play, when we held his jersey, obviously, it had time to sink in for a while, but I was like, ‘Wow!’” said sophomore quarterback Ryan Oliver.

Junior Jake Reichle observed, “It’s been a hard two weeks. For sure, he was definitely watching over us tonight.”

The Pioneers declined the penalty, and the teams got back to the task at hand of playing a Three Rivers League game they had to wait seven agonizing months to play.

By the time the Pacers got to douse first-year coach Spencer Phillips with water bottles to celebrate their 35-20 victory, it almost felt like any other Friday night football game.

“Zeke will obviously be missed for a long time,” said Pacers senior Andrew Oliver, who ran for 134 yards and two touchdowns, including the clinching score with 2:17 to play. “He meant a lot to our players, our coaches, to everyone.

“I’m super glad to end it on a positive note. This was definitely for Zeke. He was watching us up above, and we got to get it done for him.”

Pioneers honored to help Pacers in the moment

The Pioneers players understood to some extent what their opponents on the other sideline were going through. Fourteen months earlier, they’d experienced their own loss when Oregon City student Charlie Brennan died in a single-car crash.

“We knew what they were feeling, and it was an honor just to be able to come out here, take that delay of game and honor Zeke,” said Pioneers senior quarterback Trey Martin, who earlier in the week appeared on a video expressing support for the Pacers.

Pioneers coach Dustin Janz worked hard this week to balance his sympathy for the Lakeridge program with putting the final touches on the abbreviated prep time teams were given because of the Oregon Health Authority’s pandemic-related rules that barred contact drills until two weeks ago.

“We obviously thought about it, and we made sure they knew we were there for them and being thoughtful of them, their families, and all the people around the program affected by it,” Janz said. “It’s a super-sad situation, but we also wanted to play the game the best we can. It was a steep learning curve tonight, and you saw that on both sides.”

Martin, a Southern Oregon signee, threw for 279 yards and a touchdown to help keep Oregon City in the game. The Pioneers closed to within 28-20 on Christian Ferreyra’s 42-yard field goal with 7:28 left.

The Pacers answered with a 13-play drive that took more than 5 minutes, extended by a roughing the passer penalty on fourth down near midfield and capped by Oliver’s 2-yard run.

“We made too many mistakes against a good team and had too many penalties in bad situations,” Janz said. “And with all that, we still had a chance in the end. That fourth-down penalty killed us. It gave them an opportunity to score late and go up two scores instead of us having a one-score game with the ball and time to go.

“We just have to learn how close we really were. There were three plays that, if they go the opposite way, we probably win this game.”

Both looked at home in their new roles. Ryan hardly looked like a sophomore playing in his first varsity game, going 23 of 30 for 187 yards and two touchdowns. Andrew ran the ball 20 times, including several from the Wildcat on the clinching drive.

“I still view Andy as a quarterback,” Phillips said. “I just realized I’m pretty fortunate to have a guy who can do everything — throw, run, catch — and then to have another kid like his brother, who’s a very special player who can make plays with the ball.”

Ryan chuckled when discussing how it felt to beat out his brother for the starting quarterback job.

“It’s every kid’s dream to start as a sophomore,” Ryan said. “I got the start, and a win’s a win. But he’s the best athlete on the field wherever he goes, so if he’s on the field, it really doesn’t matter where. He’s going to get the ball and going to get yardage.”

The Pacers led 21-14 at halftime after Ryan Oliver’s second touchdown pass, when he escaped pressure and found his checkdown, Carter Pahl, in the left flat for a 22-yard score with 19 seconds left.

The third quarter opened with a bang for Lakeridge. Reichle intercepted an overthrow just on the Pacers’ side of midfield and, with linebacker Zac Waible clearing a path for him down the right sideline, he raced 49 yards to give them a 28-14 lead.

“It was pretty perfect,” Reichle said. “We were anticipating the slant because he (Jahleel Heath) had been targeted a few times. I got the ball, and then Zac set a really good block on their quarterback for me to be able to run it in.”

Still, the Pioneers would not go away. They cashed in after holding on fourth down at the Pacers 41 with a 25-yard field goal by Ferreyra to close the gap to 28-17 late in the third quarter.

“This was a good first step for us,” Martin said. “I had a couple of mistakes that led to them getting up, but we didn’t play bad. We’ve got five games left, and I’m excited for what we can do.”

First half went back and forth with scores

The Pioneers struck first after Lakeridge’s moment honoring Crowder. Ferreyra stripped the ball loose from a receiver fighting for yardage, and Terrance Newborn recovered at the Oregon City 35. Ten plays later, James Carter burst into the end zone from 2 yards.

The Pacers answered with a lengthy drive, needing 12 plays to score on Ryan Oliver’s 10-yard pass to Leyton Richards.

As did the Pacers, who experienced a bit of closure while getting a chance to honor their friend, gone but not forgotten.

“I could see in the kids’ faces that they were playing for something more tonight,” Phillips said. “I don’t know if we ever get over it or ever forget about Zeke. He was just a wonderful human, a wonderful soul. Just a great person.”