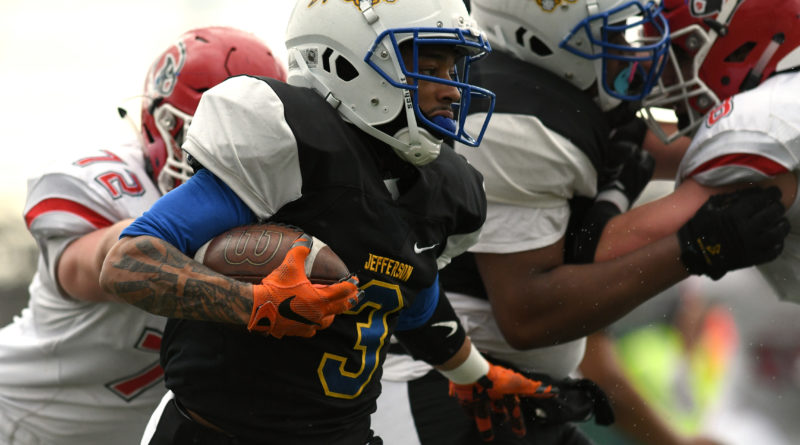 The Lillard era starts with a win Saturday as the Democrats do enough to beat Lincoln in their first game under the brother of the Portland Trail Blazers star.

When Oregon’s high school football season looked very much in doubt, Jefferson senior Damir Collins had a choice to make.

Collins had signed his letter of intent with Oregon State, and he’d seen several of the state’s top players — including Democrats teammate Nate Rawlins-Kibonge with Oklahoma — decide to graduate early to get a head start on their college careers.

Ultimately, though, he felt he had a commitment to fulfill with a Jefferson program he’d devoted 3½ years to help rebuild.

“I’m one of the leaders around the school, and if they see me leave, they might think, we might not have this because he’s not here,” Collins said after Saturday’s long-delayed 13-0 season-opening victory over Lincoln at Wilson High School in Southwest Portland.

“Obviously, it’s my senior season, and I wanted to carry out this last season with my brothers and ball out to get this thing rolling again, carry out Jefferson for years and years to come.”

In one of many signs the culture has started to change on the North Portland campus — first under Don Johnson last season, now with first-year head coach Houston Lillard at the helm — the Democrats won a game in which they struggled to find any rhythm offensively.

Collins, who ran for nearly 2,500 yards last season, broke off only one of his patented big runs — a 74-yard burst late in the first quarter — and finished with 147 yards and two touchdowns on 17 carries.

The Democrats had just 264 yards of total offense and nine first downs, but their defense locked down the Cardinals to post their first shutout of their PIL rivals since 1995. It was the fewest points Jefferson scored in a victory since September 2017.

“We’ve had more of a focus on the defensive side, learning to rally to the ball every time in practice, playing as a team,” junior safety Trejon Williams said. “Our goal for the defense this year is to have a shutout all season, and we started off right.”

The Cardinals looked like they would answer Collins’ first touchdown with a scoring drive of their own when Mario Ambrose hit Justius Lowe on a 50-yard bomb to the Democrats 21 on the final play of the first quarter.

On the first play of the second quarter, though, senior linebacker Jason Davis ripped the ball out of Ambrose’s grasp for the first of Jefferson’s three takeaways. That was as close to the end zone as the Cardinals got as they managed 173 yards and five first downs.

The Democrats accomplished this without standout junior linebacker Lamar Washington, who was in Arizona this week attending a basketball showcase tournament. Lillard said he expects Washington to return to practice next week with an eye on getting his requisite number of in-pads practices to be eligible for Week 3 of the six-week season.

“I didn’t expect our offense to win the game for us today,” said Lillard, the brother of Trail Blazers All-Star guard Damian Lillard. “I’ve been laying our hat on our defense. Our gift is our speed. We’ve got a lot of aggressive guys willing to play. We want our defense to fly around, get to the ball as a group, and give up as few big plays as possible. Today, we gave up one deep ball, and that was it. That’s perfect.

“Next week, we’ll work more on offense and get the guys going, but ultimately, the defense not giving up any points was the biggest win of all.”

That Saturday’s game turned into a defensive struggle was a pleasant surprise on the Lincoln sideline as well.

“I’m encouraged about the defense, to only give up 13 to them,” said senior Charles Willmott, who departed the stadium on crutches with an apparent torn Achilles tendon in his left foot. “Last year, defense was our biggest issue. Otherwise, we didn’t do it today, but I’m confident in our offense that we can score some touchdowns.”

Cardinals coach Jeremy Johnson chalked up some of his team’s offensive issues to a lack of prep time causing a rash of pre-snap penalties (10 of the team’s 14), but he also looked at their play along the offensive front.

“It came down to the physicality of the game,” he said. “We weren’t prepared to be as physical as we needed to be on offense. Their defense stuck it to us more than we stuck it to them.

“Defensively, we did a pretty good job except for those one or two plays, missed some tackles, and they were able to score. Take those two plays away, and we both played about the same, with not a lot of positive yards for either team.”

Improved physicality is just one aspect of Jefferson’s culture that Lillard hopes to address this spring. He started ticking off a list of areas he wants the Democrats to tackle.

“The narrative has always been, Jefferson has got athletes and can score, but they can’t block,” he said. “They don’t have linemen, don’t work well together, the kids are selfish, they have bad attitudes. Well, we didn’t have any moments on the sidelines today. We didn’t get into it with the referees.

“To me, it’s like if we could get all this done in this short amount of time — we didn’t have access to the kids during COVID — if we had a real offseason, we would have seen something drastic. I’m encouraged. We’ll keep growing, and people will notice it. If they care, they care, and if they don’t, they don’t.”

Williams added, “We want to start right, get off right to a good start, and prepare for what’s greater coming up next.”

It all started with seniors such as Collins and Western Oregon-bound offensive lineman Dontae Myrick buying into what Lillard and the coaching staff preached.

“The culture change under Coach Hou is more like, (forget) the football stuff, he’s teaching us how to be men,” Collins said. “He’s getting us to college, because without the college piece, we’re not going to be successful in life. Coach Hou always teaches us to get on top of the school stuff so we can produce on the green field.”

Laying this foundation was a key reason Collins stuck around another few months to play a shortened season with no tangible rewards such as a PIL championship or state playoff berth.

“I’m not really worried about the stats. I’m worried about the team going 5-0,” Collins said. “I’m still here to handle business at Jeff. I’ve got to handle this piece first, and the best part about this is after this season, I go straight to football in college. I’ll be taking the pads off here and putting them right back on. I’ll already be rolling.”