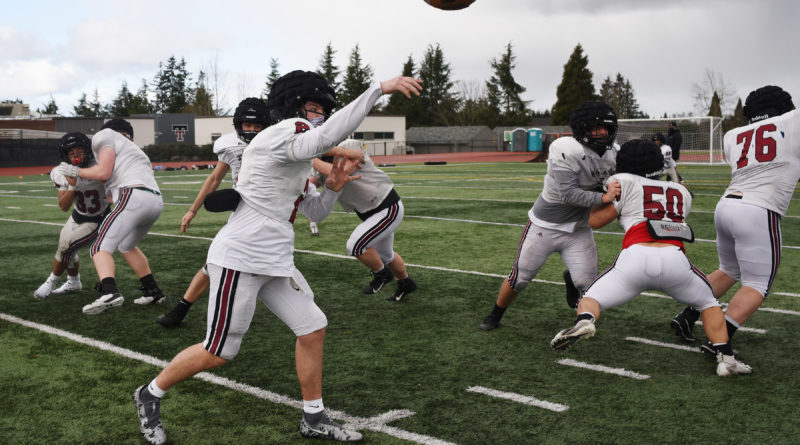 The Oregon high school football season kicks off this week. Here are one writer’s preseason Class 6A power rankings. Click on the link to read the team’s complete season preview.

Reynolds has some holes to fill, but expect the Raiders to be competitive once again with RB/LB Miles Wilson leading the way.

The Crimson Tide continue their rise led by a generational talent in Royce Fasel and a strong supporting cast.

TE Carson Cota is among the standouts on another deep, talented Panthers team that would have contended for a Southwest Conference title.

Led by QB Jackson Lowery and Northern Arizona signee Holden Whipple, the Titans have the talent and work ethic to regain their status atop the MVC pecking order.

The Falcons would have turned to a deep senior class to make another run at a conference title were this a normal season.

With ample experience on both sides of the ball, the Cavemen have another playoff-caliber roster led by a deep senior class.

The 2019 Apollos faced a rash of injuries — especially in the receiving corps and the secondary, which led to younger players starting at all eight of those positions over the final few weeks of the season. That experience could pay dividends during this shortened spring season.

With 13 starters back — the majority of whom received all-conference recognition in 2019 — from a team that won a playoff game, North Medford had aspirations far beyond securing the program’s first conference championship since 2013. Some of those goals are now off the table, but the Black Tornado have plenty to look forward to this season and beyond.

Oregon City has several seniors who could play at the next level, led by QB Trey Martin (Southern Oregon), and waiting in the wings is what coach Dustin Janz believes is a group that could get the Pioneers to the point where they can compete in every game in the rugged Three Rivers League.

The Bruins hope to keep the momentum of last season’s state semifinal appearance going despite the pandemic, 22 graduations, two head coaching changes and the uncertainty over whether they’d get a tackle football season.

Another team looking to build off a historic season after graduating a number of key players. The Beavers have one of the state’s best two-way players in Oregon State signee Trent Walker, and Gavin Fitzhugh and Ryan Mendiola form a solid 1-2 linebacking duo to man the middle of the Beavers’ 3-5-3 scheme.

The Generals return first-team all-league players at 10 positions and would have been among the favorites to win at least a share of their third consecutive PIL championship (tied for first in 2018, won outright in 2019).

The Tigers had been building over the past couple of years for this season, but now they hope to give this special group of seniors a proper farewell and build upon a strong group of juniors, led by QB Levi Durrell and RB Price Pothier, to make another run at a conference title in the fall.

Another year, another familiar sight for Irish fans — the program reloading with a whole new cast of characters. Sheldon has multiple top-end players in the trenches but lacks depth compared with recent seasons.

This season will be one of transition from a group that reached the state quarterfinals for the first time in a decade to a large, talented cadre of juniors, the first wave of which blended into last season’s team and now serves as the foundation this season.

After three consecutive trips to at least the Class 6A semifinals, Clackamas was 4-5 last season and took a first-round exit from the playoffs. The Cavaliers seek a return to elite status under first-year coach James Holan and have the pieces to do so if they can sort out their quarterback situation.

Coach Steve Coury thought his team would remain competitive despite graduating nine all-league players, including two-time 6A offensive player of the year Casey Filkins. Even after losing OL Bailey Jaramillo (moved to Texas to play football) and WR/DB Malcolm Williams (focusing on baseball after signing with Santa Clara), the spring season offers an opportunity to see who can fill the many holes in preparation for a fall 2021 campaign built around a promising junior class.

The Tigers will remain competitive despite graduating several key players from last season’s Three Rivers League champions. The shortened spring season can help resolve who will start at quarterback should things return to normal next fall and provide an opportunity for players such as WR Keenan Speer-Johnson and WR/FS Karson Boschma to gain experience that pays dividends down the road.

Graduation took a deep and broad toll on the Rams, who in 2019 won the school’s third Class 6A title in the past seven seasons. The next group of players can gain experience this spring that could lead to another title run in the fall.

The Mavericks officially arrived as a contender in the Metro and state title races last season, when they knocked off Tigard in the second round and reached the quarterfinals in just their second season. They have the state’s top Class of 2022 quarterback in Brian Mannion and nearly two-dozen seniors ready to make their mark over the next six weeks.

The Pacers appear ready to take off after hiring former NFL offensive assistant Spencer Phillips as their head coach. He has installed a high-school-ready version of his offense, and he’s hoping to get kids opportunities to showcase themselves and prepare for a fall 2021 season.

The Crusaders have question marks at the skill positions, but with “The Franchise” still in very good hands anchored by senior offensive linemen Charlie Pickard and Declan Quillin, Jesuit again would have been on the short list of state championship contenders in a normal season.

This might be the strongest Bowmen team since 2013, the program’s final year as a 5A school when it reached the state championship game. The defense is poised to be one of the state’s best, led by LB Bryan Cuthbertson and including six others who made the all-conference team in 2019.

Somewhat lost in all the whirlwinds of the Lions’ coaching situation is that they bring back a senior-laden contingent that could have netted the program’s first state title since 2016. Senior Blake DeBisschop is likely to become a top-10 quarterback across all classifications, especially in coach Chris Miller’s high-powered passing attack balanced again by Gavin Haines’ hard-running style. The defense returns its top two tacklers in seniors Cole Peters and Thomas McNamara.