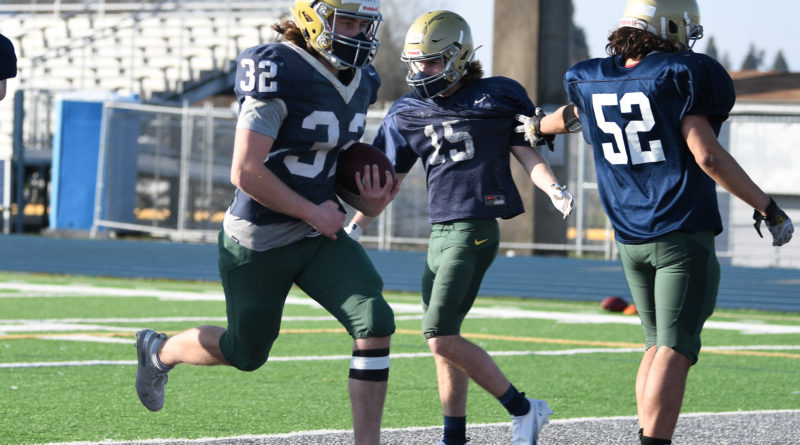 The Oregon high school football season kicks off this week. Here are one writer’s preseason Class 5A power rankings. Click on the link to read the team’s complete season preview.

With the TC Manumaleuna era about to kick off, the Vikings’ future looks bright. A proven offensive line and promising skill position players give North Salem reason to be optimistic.

Regardless of schedules, pandemics or other obstacles, the success of these Springfield seasons — last season and this one — will be measured further down the road. However, all signs appear to be pointing upward for the Millers.

A move to a new league (NWOC East) provides optimism as the Ravens break in a new quarterback. Moreover, of Ridgeview players to receive all-league recognition last season, only two were seniors.

Support for QB Jarod Miller’s successor from the skill position players and the offensive line could go a long way toward determining success for the Vikings.

The Riverhawks graduated a boatload of talent from last season’s 4A state semifinalists, but Andrew Savaiinaea’s return is a game-changer for The Dalles in its jump to 5A.

Continuing to establish the program’s identity and improving the offense (the Scots scored fewer than seven points in all seven of their losses in 2019) are the focus for an improving McKay program this spring.

The Panthers lost four players who were all-league last season, but a solid nucleus returns to build off the momentum of a four-win improvement a season ago.

The Spartans won their final two regular-season games of 2019 to qualify for the playoffs for the first time since 2014. They hope to forge ahead with a deep cadre of skill players, while juniors Carter Steeves and Garrett Holpuch compete to be the team’s starting quarterback.

Continuing an upward trajectory in the team’s winning percentage would appear to be a challenge after heavy graduation losses, but if the progress of last season left an imprint on the DNA of the program, more success could be within Hillsboro’s grasp.

Willamette has been on a steady upward trajectory, and there’s no reason to think that would have been interrupted had the 2020 season been played under normal circumstances. A defense led by a solid group of linebackers would have made the Wolverines very competitive in the race for the Midwestern League title.

With no playoffs to shoot for, the Lancers’ first priority will be giving the senior class a fond farewell, but the juniors have another season to grow into a playoff-caliber club in the fall.

Dallas improved substantially in coach Andy Jackson’s second season, jumping from two victories in 2018 to six last season and a state playoff berth. Seventeen all-conference players have moved on, but the Dragons have some experienced players in the backfield.

The Broncos last season had players at nine positions on the all-NWOC East first-team offense and defense who contributed to a first conference title since 1966, including the players of the year on both sides of the ball. Their departures, plus the loss of coach Keanan Lowe, left large holes, but the cupboard was not left completely bare for new coach Brian Jackson.

The Bulldogs have finished in the top 10 of the OSAA rankings both years since making the jump to 5A. With many of their league rivals retooling and the established pecking order in 5A somewhat in flux, fall 2020 could have been the season for North Bend to put together a playoff run.

If control of the line of scrimmage is the key to the game, Hood River Valley looks to be in a good spot. Led by Oregon State-bound senior OL Henry Buckles, the Eagles have proven performers in important positions on the front lines.

Coach Erik Davis likens this year’s sophomore class to the senior class that led the Buckaroos to the 2018 Class 5A semifinals, with high-end speed, great athleticism, solid linemen and a couple of quarterbacks — including projected starter Brogan Biggerstaff — in the mix.

Scappoose has handled its reclassification from 4A to 5A with success. In both seasons as a 5A school, it has made the OSAA quarterfinals. With no playoffs, making a third consecutive quarterfinal won’t occur this season, but expect the Indians’ rise to continue while transitioning to more of a pass-oriented offense.

Led by one-of-a-kind QB Ryan Rosumny, the Falcons might be 5A’s most exciting team to watch this season. The Falcons gave up 40 points in five of their games last season, so there’s room for growth on that side of the line of scrimmage.

Over the summer, the Warriors had the look of a state title contender. The team had five experienced offensive linemen coming back, a returning starter at quarterback and a deep group of skill position players. After the fall season was canceled, top recruit Keith Brown enrolled early at Oregon, but the cupboard is far from bare.

The Bulldogs will give a special senior class its proper farewell, then get to work building another title contender for the fall. Along with the large group of returning standouts, they also expect major contributions from DeMarcus Phillips-Houston, an explosive sophomore who could play numerous positions on offense and defense.

At Silverton, the old adage of reloading versus rebuilding has never been more true. The Foxes graduated four all-state selections, but junior Jordan McCarty is one of the state’s best quarterbacks regardless of classification, and the team has a number of capable running backs.

The Cougars figure to make further strides after escaping the 6A Three Rivers League. With a promising quarterback in junior Mikey Gibson, a top receiver in Air Force commit Chance Miller and an experienced line to provide protection, things look good on offense.

Despite graduating some top-end talent and changing coaches, many of the pieces that last season propelled the Comets to within four points of the program’s first state championship remain. They have one of the state’s top receiving duos in seniors Dawson Douglas and Trevor Jaasko.

Did the virus cost the Colts a third consecutive state title? With a line that’s bigger than before, skill players with as much potential as those they’re replacing, and the experience and confidence that come from having a small role in two historic seasons, few would have bet against the Colts, even with a great senior class having moved on.

If there were a 5A football state title game this season, there’s a good chance the Wildcats would have been in it. Their quarterfinal loss to eventual champion Thurston ended their streak of making at least the semifinals at four years, but talk about a springboard. Wilsonville had juniors or sophomores starting at 19 of the 22 positions and was geared toward a huge season in 2020.