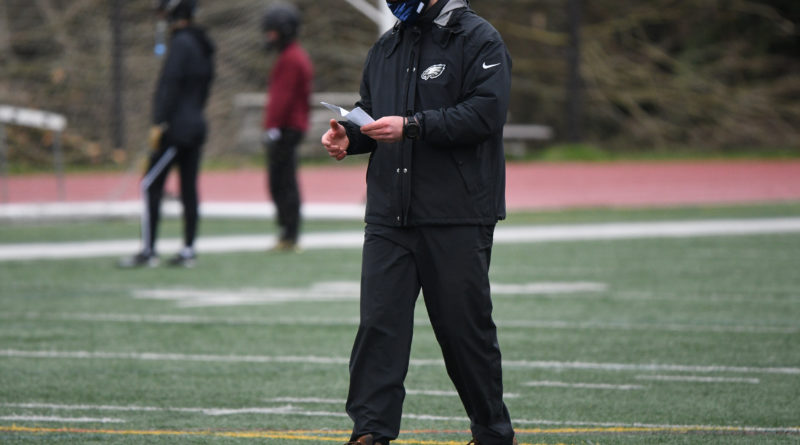 There are 18 first-year head coaches in Class 6A, 5A and 4A high school football — five in the PIL.

Here’s a closer look at the 18 men entering their first season as the head coach at their current program. (Some have coached at other schools.)

Find the complete breakdown for every Class 6A, 5A and 4A team at this link.

Smith wasn’t hired until November, but he’s coached in the Portland area since the 1980s, including a 15-year stint as head coach at Century in Hillsboro (59-90 from 2002-16) and four seasons at Madison (17-19 from 1997-2000). He acknowledged he initially didn’t want the Cleveland job, but after consulting with several people — including last season’s interim coach, Ken Duilio — what he heard convinced him he should apply.

In a coaching career that includes professional stints in Europe and in the XFL, Thompson also has experience in the PIL. A former player at Lincoln in Southwest Portland, Thompson seems well-suited to trying to shore up an urban-school renewal program that went 2-16 in Wes Warren’s two seasons.

Lillard, older brother of Portland Trail Blazers guard Damian Lillard, was Jefferson’s offensive coordinator last season. When former head coach Don Johnson left after one season to become director of high school relations at the University of Oregon, Lillard was promoted to succeed him. This marks the third season in succession the Democrats have had a first-year head coach.

McCants, a former Oregon State running back, came to the North Portland school from Lincoln in Southwest Portland, where he was an assistant coach for six years. He took over a program that made the state playoffs each of the past two seasons under Tim Price Sr., who stepped down with a 13-15 record in three seasons.

The recently renamed Wilson High School gets a new coach to kick off a new era. Bennett has been a coach and defensive coordinator at several schools in Oregon, including West Linn, Riverdale (1-8 in his lone season as head coach in 2007) and Horizon Christian. He oversaw the defense for Amity while the program won six state championships. His most recent head coaching job was at North Marion, where he led the Huskies to a 5-5 record in 2018. Bennett succeeds David Kilpatrick-White, who guided the Trojans to a 3-23 mark over the past three seasons.

Koenig took over as interim coach in October after Kilpatrick-White — hired to succeed longtime coach Terry Summerfield last spring — had his contract rescinded when he was found to have violated Gresham-Barlow School District safety guidelines by holding football workouts during the pandemic, according to OSAAtoday. Koenig, an assistant on the Barlow staff the past three years, was Gresham’s head track coach for 15 seasons.

Holan is the Cavaliers’ second first-year coach in the past two seasons, both hired from outside the staff. He succeeds Terry Drake Sr., who took a medically induced leave of absence before Week 9 and then resigned. Holan, an offensive lineman on Linfield’s 2004 national championship team, arrived at Clackamas after serving as offensive coordinator at Simon Fraser University for three seasons.

Phillips, a Eugene native who spent four seasons as an offensive assistant with the Philadelphia Eagles, joined the Pacers in February 2020. His wife, Keely, also a Willamette High School graduate, is a nurse at Oregon Health & Science University Hospital, and the couple purchased a home in Southwest Portland in 2018. He succeeds Forrest Sherman, who took over the program on an interim basis in August 2019 after Elvis Akpla left the team just before the start of camp.

Jackson returns to Parkrose after having been an assistant coach at the Northeast Portland school in 2018 under then-first-year coach Keanon Lowe. When Lowe left after last season’s historic accomplishments for UCLA (he’s now an offensive assistant at Nebraska), Jackson — an assistant last season at Southridge in Beaverton — was hired to succeed his former University of Oregon teammate.

Almost exactly one year ago, Everett was hired to be Central’s third head coach in the past three seasons. Longtime coach Shane Hedrick resigned after the 2018 season, and Jeff Centoni stepped down after leading the Panthers to a 2-7 record in 2019. Everett, a Western Oregon graduate who spent the previous 10 years as an assistant at Central, walked into a new role right before the COVID-19 pandemic exploded.

Head coach David Younger resigned after seven seasons with a 28-38 record and was replaced by Louber, a South Albany graduate who served as Younger’s defensive coordinator the past five seasons. Louber, a fullback and linebacker on the RedHawks’ first state playoff team in 1996, was part of three state championship teams while coaching under Randy Nyquist at West Albany.

It’s rare that a first-year head coach inherits a reigning state finalist, but that’s where Brown finds himself after three seasons as Crater’s defensive coordinator (and 12 years at Southern Oregon University before that). He takes over for Randy Waite, who stepped down after three seasons (23-11 record) to become assistant principal at Phoenix.

Carmichael takes over for Calvin Griggs, who led the Huskies to a Tri-Valley Conference title in 2019 but stepped down last summer to take a coaching job in Westland, Mich. Carmichael, a 2009 McKay graduate who played linebacker at Western Oregon, served as Griggs’ defensive coordinator last season.

Schaffeld joined the Cubs in April 2020 after serving for three seasons as an assistant football coach at Bishop Kelly in Boise. A full-time PE teacher at Yaquina View Elementary, he takes over for Rod Loiser, who went 15-34 in six seasons.

Woodburn is the third head coaching stop for Mace, who went 2-14 in two seasons at La Grande (2012-13) and 1-7 in his only season at Marsing, Idaho. A volunteer offensive line coach and special teams coordinator for the Bulldogs the past two seasons, Mace takes over for Nick Federico, who led the program to its first playoff appearance in the past 45 years in 2018 and went 18-54 in eight seasons.

Polamalu has coached high school football in Oregon for more than 20 years, but this is his first foray into Class 4A, and the circumstances are challenging. Though just a season separates the Lions from their last playoff appearance, their 2018 play-in victory over Newport is the program’s most recent win. Cottage Grove went 0-8 in Chad Smith’s only season in 2019, and Polamalu — 69-49 in 11 seasons as a head coach with Douglas (2008-12) and Sandy (2013-18) — returned closer to home (he lives in Eugene).

Estrada, who moved to Milton-Freewater from Long Beach, Calif., 13 years ago, ran the Milton-Freewater youth program for five years and coached the Central Middle School team in 2019. He knows firsthand what he’s up against in trying to rebuild a program which last had a winning season in 1996 and played an independent schedule in 2019.

Ontario football had a nightmarish 2019 campaign, seeing first-year coach Tony Cade leave the program just three weeks into the season facing accusations of bullying players (charges he disputes in a federal wrongful termination lawsuit), then going winless through a grueling schedule in which the Tigers played eight 4A or 3A teams. Simmons stepped into the breach as a co-interim coach after Cade’s departure, and he accepted the head coaching job in February 2020 after spending eight years as an offensive and defensive line coach with the Tigers.