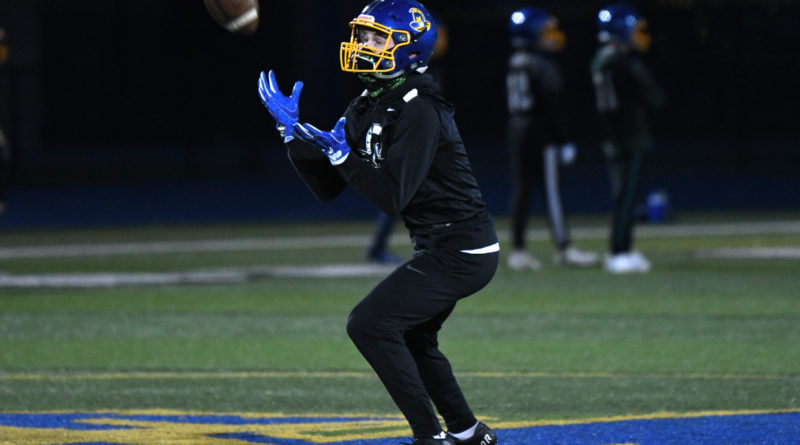 We kick off our group of top-20 players in the state with Zimmermann, a second-team all-state pick on defense last season for a Bulldogs team that allowed 9.6 points per game. At 6-foot-4 and 245 pounds, Zimmermann had 45 tackles (seven for loss) and two sacks as a junior.

A second-team all-state outside linebacker who recorded 130 tackles (95 solo, 17 for loss), 4½ sacks, four forced fumbles and nine hurries last season, the 5-10, 190-pound Peters will play at Division III Johns Hopkins in Baltimore next fall — the Bluejays have made 12 consecutive postseason appearances.

As a junior, Wilson was named first-team all-Mt. Hood at running back and second-team at linebacker for the second consecutive season, finishing with 64 tackles and seven sacks. He earned his accolades despite missing three games in the middle of the season with an injury.

The heart and soul of the Democrats defense last season was Davis, who led the team in tackles from his middle linebacker position with 137 (18 for loss, four sacks), earning first-team all-PIL recognition. The 6-3, 215-pound Davis is No. 21 in 247Sports’ Oregon class of 2021 rankings, and Arizona State is among the schools to have made an offer, although he has yet to sign with a school.

Muggy was first-team all-state as a defensive back and led Class 5A in interceptions last season with six while breaking up nine passes and making 25 tackles — all this after coming on strong during the Colts’ run to the 2018 state title. On offense, he’s moving from receiver to quarterback this season. He signed with Western Oregon last month.

Oliver has signed with The Citadel as a safety, but in his time at Lakeridge, he has been a quarterback, cornerback — a new position last season at which he became a second-team all-league selection with 40 tackles and six interceptions — and punter (all-league honorable mention). First-year coach Spencer Phillips said he could put Oliver at any skill position but wants him under center to have him involved on every play.

Fasel might be the best player to come through the Glencoe program in a generation. A Day 1 starter as a freshman, he made the all-Pacific team at three positions (running back, linebacker and kick returner) last season. He ran for 1,023 yards and 10 touchdowns, caught 23 passes out of the backfield, and led the Crimson Tide with 72 tackles (10 for loss). He was the only sophomore voted to the 6A all-state team (honorable mention defense), becoming the first Glencoe player to earn all-state recognition since 2010.

O’Donnell, a 6-foot-5, 315-pounder who made the all-state second team as a defensive tackle last season with 27 tackles (6.5 for loss) and two sacks, signed with Western Oregon in early February. He’ll start both ways this season for the Colts.

Simpson is one of the most dynamic playmakers in Oregon — the No. 19-ranked recruit in the state according to 247Sports, he signed with Western Oregon in February to play in the secondary in the fall. He was a third-team all-Metro cornerback with 51 tackles and six interceptions, and he led the Mavericks with 42 catches for 587 yards and six touchdowns. He ran the ball 52 times for 246 yards.

Haines last season proved to be a more-than-able replacement for two-time all-state back Dawson Jolley, earning all-state honors himself while running for 1,620 yards and 21 touchdowns to help lead the Lions back to the 6A quarterfinals. Haines’ breakthrough junior season earned him a preferred walk-on offer from Oregon State, which he accepted over offers from Georgetown and Idaho State.

We move to the top-10 players with one of the most versatile players on our list. The Central Washington signee earned second-team all-Metro honors on both sides of the ball last season, catching 46 passes for 847 yards and nine touchdowns and making 30 tackles and two interceptions in the secondary. He also can play quarterback if needed for the Warriors.

Cuthbertson was the 2019 Pacific Conference defensive player of the year and a first-team all-state middle linebacker who led the state in tackles with 158. He had 22 tackles for loss, four sacks and two blocked punts. He was a first-team all-conference guard, but defense is his calling card, earning him an offer from Portland State, although he’s another top Oregon player who has yet to sign with a college.

The 6-foot-2, 285-pound Buckles, ranked as the No. 7 recruit in Oregon’s class of 2021 by 247Sports, signed with Oregon State in December’s early signing period. He was a first-team all-NWOC East offensive tackle and voted co-lineman of the year as a junior, earning all-state honorable mention, and the Beavers targeted him early in the recruiting process to play center for them.

The brother of NFL veteran Sean Mannion and son of Mavericks coach John Mannion began last season serving his apprenticeship on the JV squad, but after a Week 7 loss to Aloha, he got the call to start the next week against Westview. In five starts, he went 4-1, led a second-half comeback against top-seeded Tigard with four touchdown passes and nearly led another against Barlow in the quarterfinals.

Pickard is the latest in a long line of standout linemen to come out of the Crusaders program. He turned down several scholarship offers, including one from Mountain West champion San Jose State, to accept a preferred walk-on offer from Oregon, where the two-way all-state selection (second team on offense, honorable mention on defense) hopes to become the next walk-on to earn a scholarship in Eugene.

Walker had interest from service academy teams and several FCS schools, with 4.52-second 40-yard speed and 2019 statistics — 72 catches for 1,010 yards and 11 touchdowns at receiver, 59 tackles (49 solo), two interceptions, three forced fumbles and four pass breakups at safety — that helped earn him first-team all-Metro honors on both sides of the ball and second-team all-state on offense. Instead, he accepted a preferred walk-on offer from Oregon State, where he could become a solid player for another Beavers team.

Williams last season was first-team all-PIL at wide receiver (14 catches for 251 yards and two touchdowns) and defensive back (37 tackles, two interceptions), and he could become the best all-around player in the state by the time his career is finished. He’s vaulted up the recruiting lists as well. The 6-foot-1, 195-pounder is the No. 9 junior safety in the country in 247Sports’ rankings — No. 21 in ESPN’s rankings — and the state’s No. 2 prospect in the class of 2022 according to 247Sports.

Winston teased the state’s high school football fans with his play for last season’s 6A state champions (25 tackles, four pass breakups), and he’ll become the third member of his family to play Pac-12 football (and the second at Oregon, where he committed over the summer) in a couple of years. For now, we’ll enjoy watching him make himself at home in opposing backfields for the next two seasons.

Savaiinaea returned to The Dalles, where he grew up, after playing his first two years of high school football at Eastside Catholic in the Seattle suburb of Sammamish, where he had 25 tackles and three sacks last season despite missing a month. The 6-5, 280-pounder is being recruited by seven Pac-12 schools — he is No. 5 in 247Sports’ Oregon class of 2022 rankings. Week 5 of the spring season, when The Dalles and Hood River Valley meet in their annual Gorge rivalry game, should be fun to watch when Savaiinaea and Buckles square off.

A second-team 6A all-state running back and the PIL offensive player of the year in 2019, Collins, rated the No. 7 all-purpose back nationally in the class of 2021 by 247Sports, signed with Oregon State in December after the Beavers made him one of their top targets in this recruiting cycle. The 5-foot-9, 180-pound Collins rushed for 2,453 yards last season, averaging 11.3 yards per carry, and scored 27 touchdowns on the ground and two on receptions.