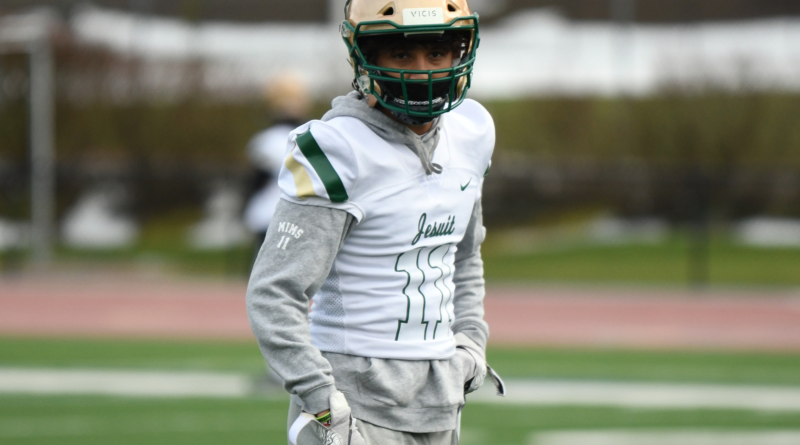 Newell played behind all-state first-teamer Santino Stranieri last season, making 17 catches for 204 yards and four touchdowns in a backup role as the Colts repeated as state champions. His recruiting blew up over the summer — he shined at several collegiate showcases and picked up an offer from New Mexico as well as interest from Oregon and Oregon State.

Mims is the top returning offensive weapon for the Crusaders, catching 13 passes for 136 yards and two touchdowns as a junior in their run-heavy attack. He also played nickelback beside all-state defensive backs Campbell Brandt and Seth Welsh. He figures to claim one of the starting cornerback jobs this spring.

Brannan was the Trojans’ leading receiver last season, finishing with 37 catches for 621 yards and four touchdowns. He was first-team all-PIL on offense and signed with Portland State in early February.

Speer-Johnson has made a name for himself in passing leagues and on the recruiting circuit, where he’s received offers from recent bowl game winners Kentucky and Nevada, as well as Utah State. A wrist injury in Week 4 derailed his sophomore season, so he’s definitely looking to show the hype is for real this season.

A second-team 5A all-state selection at defensive back last season with 61 tackles and three interceptions, Sipos recently committed to Oregon as a preferred walk-on. He has good size (6-foot, 185 pounds) and is a dangerous receiving threat.

With all-state center Edward Beglaryan out with an injury, Murphy’s experience as a second-team all-league selection up front carries even more importance with four new starters around him. He received all-league honorable mention at linebacker with 46 tackles (4½ for loss) and 2½ sacks.

Caufield transferred from South High School in Torrance, Calif., after his mother got a job in the area. As a junior in California, he caught 36 passes for 643 yards and eight touchdowns and made 59 tackles and five interceptions in the secondary. He grew three inches and added about 40 pounds over the summer, and he signed a preferred walk-on offer from Oregon State in early February.

Stephenson’s first start for the Spartans came three years ago in the playoffs. As a wide receiver, he was shut down by a future Pac-12 defensive player of the year (Talanoa Hufanga, then of Crescent Valley, now of USC). It’s safe to say his career has blossomed since then. He made the 4A all-state team last season in the secondary (first team) and at receiver (second team), finishing with 42 catches for 644 yards and nine touchdowns as well as 57 tackles and three interceptions.

Liscom was a first-team all-NWOC East selection on defense last season, when he was near the top of the 5A leaderboard in tackles with 107 — as a sophomore. If he shows the natural development expected with a year-plus of growth and maturity, he should be one of the top weapons not only at Pendleton but in all of Class 5A football.

After being named to the all-PIL second team at linebacker last season (42 tackles, 11½ for loss), Washington is No. 4 in 247Sports’ rankings for Oregon’s Class of 2022 and has colleges interested in him as a basketball player, too. The 6-foot-4, 240-pound Washington is a four-star recruit who is No. 20 nationally among outside linebacker recruits, with offers from nine FBS schools.

Moxley was one of the most dominant linebackers in the Metro League last season, finishing with a team-high 142 tackles (23 for loss), 13 sacks and 16 hurries. He is one of many players statewide who will now benefit from having senior film to provide prospective college coaches.

A second-team all-Southwest Conference selection on the offensive line as a junior, Schwake has signed to play college football at Eastern Washington. The 6-foot-8, 300-pound offensive tackle is rated a three-star prospect by 247Sports. “Shane is big, large and massive, and you can’t teach that size,” said EWU coach Aaron Best.

Neuman, a 6-foot-4, 245-pound two-star prospect, recently accepted a preferred walk-on offer from Oregon State. He was a first-team all-Southwest pick on defense last season (25 tackles, seven for loss) and received honorable mention at tight end after catching a team-high 27 passes for 314 yards and four touchdowns.

Bradd put up monster numbers last season after transferring from Eagle Point to the Black Tornado, rushing for 1,581 yards and 26 touchdowns (fifth in Class 6A). He was a first-team all-Southwest pick on offense and could be in the mix at outside linebacker as a senior.

Broussard was one of the top two-way players in the Metro League last season, earning first-team recognition on offense after running for 807 yards and 13 touchdowns and second-team honors at linebacker with 25 tackles and four sacks. He has received offers from Linfield and Southern Oregon.

Rios didn’t catch a pass on offense last season but still was voted first-team all-MVC at tight end for his blocking prowess. He has started at linebacker since his sophomore season and earned second-team all-conference honors in 2019. The 6-foot-2, 230-pound Rios is committed to Princeton and rated a three-star prospect by 247Sports.

Musgrave, the nephew of former Oregon quarterback Bill Musgrave, started at quarterback for most of last season before suffering a broken finger. The 2019 Oregon School Ski Association champion in the slalom and giant slalom, he gave up the sport to focus on football, and the Idaho signee will be moving to inside linebacker this season.

Reese had a chance to play at the next level in two sports. He won a 6A wrestling state championship in February 2020 after a junior season on the gridiron in which he had 29 tackles for loss (88 total tackles), 7½ sacks, 11 hurries and three forced fumbles and earned first-team all-Pacific honors. He held offers from Northern Colorado, Valparaiso and San Diego, but instead accepted a preferred walk-on offer from Washington.

Noga made the 2019 all-league team at three positions — receiver, kick returner and punter — and was a first-team all-state wideout after making 76 catches for 1,331 yards and 15 touchdowns. His 18 catches in the state final set a championship-game record. He has accepted a preferred walk-on spot to join his former quarterback, Sam Vidlak, at Oregon State.

Miller thrived with the Cougars’ switch last season from the wing-T to coach Jimmy Joyce’s preferred spread offense. He had 59 receptions for 963 yards and nine touchdowns (16.3 yards per catch), earning first-team all-Three Rivers honors, and he will enroll in the U.S. Air Force Academy later this year.