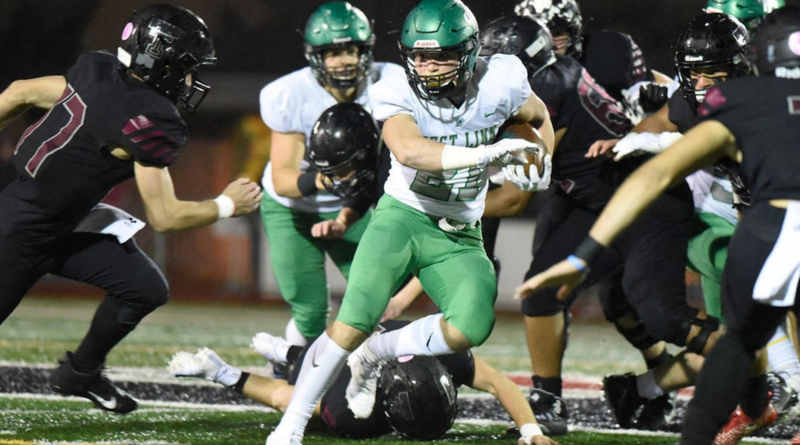 The Oregon high school football season kicks off this week, and SBLive has rolled out a comprehensive statewide preview, including a look at 25 of this season’s top games.

Now, we focus specifically on the Week 1 schedule. Here is an inside look at the top high school football games across the state of Oregon this week (March 4-6).

Photo by Rockne Andrew Roll: Gavin Haines and West Linn vs. Tualatin in 2019

Finally, football is back! The 2021 spring season officially kicks off with this lone Thursday matchup featuring two 2019 playoff teams.

It will be a Holy War unlike any other in the 61-year history of the series. No fans will be allowed in the stands to keep the facility within the 150-person limit set by Oregon Health Authority guidelines. The Crusaders are the last team to defeat the Rams, winning 42-26 in Week 5 last season before Central Catholic ran the table the rest of the way en route to the state title.

Two Three Rivers League powers square off to start the season. West Linn would have been one of the favorites to win a state title during a “regular” season, while Tualatin is coming off its first quarterfinal appearance since 2010. The Lions have won all six meetings since the Timberwolves joined the TRL in 2014 and are 7-1 all-time in the series.

The game will be played with heavy hearts after the suicide of 15-year-old Lakeridge player Ezekiel Crowder on Feb. 22. The Pioneers shared a video with the Pacers this week that was posted on the Lakeridge Football Twitter feed expressing their support for their Week 1 opponent during this difficult time.

Sherwood has won all six meetings since moving up to 6A in 2014, but this might be Newberg’s best team in recent history, and this matchup could turn into a barnburner.

Can their season-opening matchup come close to matching the drama of their 2019 regular-season finale, which the Vikings won 14-10 after they scored on a fourth-and-goal play from the 1-yard line in the final minute?

A fantastic matchup between the Trojans, who won the 2018 Class 2A state title and reached the 2019 final, and the reigning Class 3A champion Eagles. Both teams return multiple all-state players, meaning there shouldn’t be much drop in quality.

An afternoon delight featuring two of the city’s top running backs — Lincoln’s Charles Willmott and Jefferson’s Damir Collins — in the latest edition of the 111-year-old series. The Democrats also feature two of the state’s top junior recruits in defensive back Trejon Williams and linebacker Lamar Washington.

The Bruins put in yeoman work following the announcement that the Gresham-Barlow School District had opted into the full-contact season to complete the mandatory in-pad practices to get a Week 1 game. The 2019 semifinalists open against the reigning PIL champion Generals, who return all-league first-teamers at 10 positions.

The Cavaliers are looking to rebound from an “off” season in 2019, when they finished below .500 for the first time since 2012, against a Cougars team that hinted at a renaissance by winning back-to-back games to close the 2019 season and put an emphatic end to a 22-game losing streak.