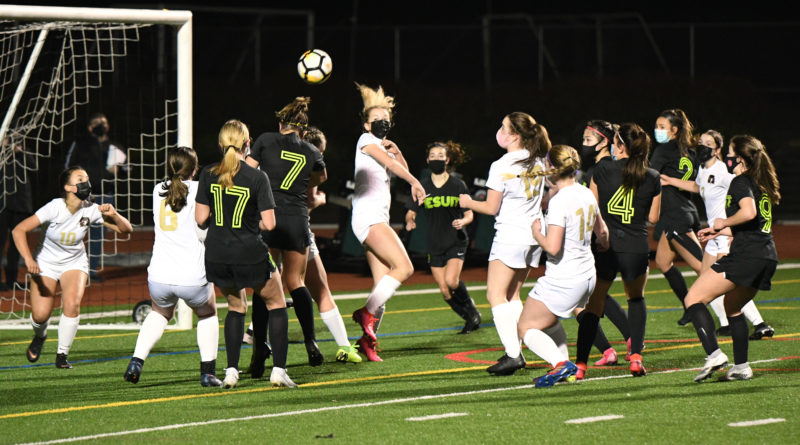 The Southridge girls soccer team had nothing to lose in Tuesday’s Metro League opener against three-time defending state champion Jesuit.

And when the Skyhawks exited Cronin Field 80 minutes later, they still hadn’t lost anything, ending the Crusaders’ league win streak at 24 matches by playing them to a scoreless draw.

“For sure, it felt like a win,” said Skyhawks keeper Julia Pinnell, who made 11 saves to post the shutout. “We knew we needed to have a stellar backline. We needed our whole defense tonight. It was tough, but we held through and held our own.”

The Skyhawks also were the previous Metro League team to take a point off the Crusaders in a league match, beating them 2-1 on Oct. 6, 2016, en route to winning the league title.

Southridge’s fortunes soon tumbled. The Skyhawks were 8-25-8 over the past three years, including a two-win season in 2019 during which they went winless in Metro play for a second consecutive go-round.

This is a young Skyhawks team, with more freshmen (three) than seniors (two) on the roster, and they weathered a barrage that saw the Crusaders control possession for long stretches and take 28 shots, hitting the crossbar five times and missing on a penalty kick.

“We came in tonight ready to play,” Pinnell said. “This was a great game to start the season off. It sets the tone for the rest of the season.”

The Crusaders extended their unbeaten streak to 59 games, with Tuesday’s result only the second time they have not won during that run.

“We didn’t perform poorly tonight, and it could clearly have been a different scoreline,” Jesuit coach Steve Fennah said. “The reality was that final pass, that final shot just didn’t go in. Their keeper did great, let’s not forget that, and they got a lot of bodies in front. They did a great job.”

It certainly wasn’t the result expected from a program that has been the gold standard for 6A soccer over the past three seasons. Some of it had to do with the compressed start to the season — practice began for the six-week season Feb. 22, giving the Crusaders and Skyhawks just six practice days entering Tuesday’s opener.

“We have to get back into the swing of things,” said junior Taylor Krueger, one of six starters back from last season’s state champion. “This is just the beginning for us. We’re hoping to do better in the future, and I think we will. We’ll keep training, keep getting better, and as a team, we’ll have better connections, and that’ll show on the field.”

There’ll be no respite coming in the remainder of the Crusaders’ schedule. Their next eight games before the culminating week in early April consist of all playoff teams from 2019, including nonleague matches with quarterfinalists Barlow and West Linn and finishing with a title-game rematch with Mountainside on April 1.

No rebuild with 11 seniors: ‘Tonight was just the first step’

Fennah pointed out that the Crusaders, with 11 seniors on the roster, have a lot of experience, but they’re also looking to replace the spine of their team in state career goal-scoring leader Callan Harrington — who took her 133 goals to the University of Oregon — and a couple of two-time all-state selections in midfielder Jaiden McClellan (San Jose State) and goalie Mary Votava (Notre Dame).

“That’s three high-caliber Division I players, so there’s going to be adjustments and changes,” Fennah said. “Even though this group has been around each other for a while, we have a number of different starters and kids who we’re fitting in. Tonight was just the first step.”

Fennah also attributed some of the lack of polish in the final third to the excitement of finally taking the field for the first time in the past 16 months and likened it to the experience of a playoff game.

“You get so excited, so emotional about a game that you don’t perform at your best,” he said. “They came in so emotional tonight that it negated some of the quality that we typically play with.

“But I don’t think that’s just our high school kids. That’s every soccer team in the Portland metro area, every football team, volleyball team. The Southridge kids were equally excited to play tonight. There’s definitely excitement around being able to play again. That’s something we talked about after the game. It didn’t go our way tonight, but let’s be excited about being back on the field.”