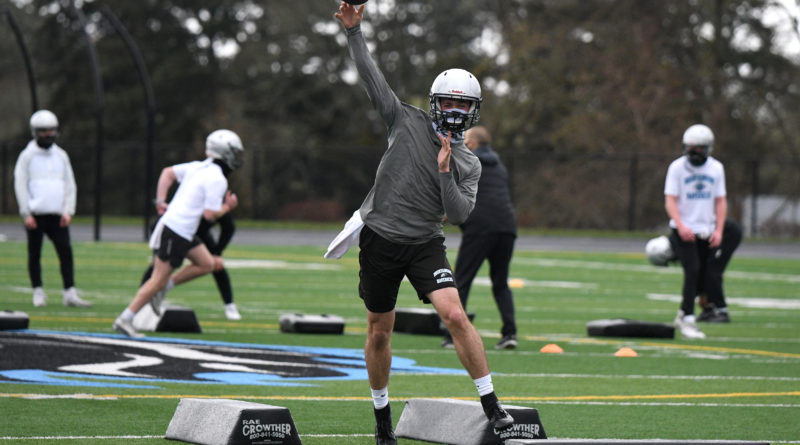 Here, we examine some of the top offensive player of the year candidates in Class 6A.

Simply put, Collins is the best offensive player in the state of Oregon. A second-team all-state running back and the PIL offensive player of the year last season, Collins signed with Oregon State in December, becoming one of the highest-ranked recruits ever to sign with the Beavers. He rushed for 2,453 yards (11.3 per carry) and 27 touchdowns last season, and even in a shortened season, he could get to 1,000 yards this spring.

In five starts after moving up from the JV team, Mannion went 4-1, led a second-half comeback against top-seeded Tigard with four touchdown passes, and grew in confidence with every game. He’s now firmly established as one of the West Coast’s top quarterback recruits — Oregon State, California, Colorado, Syracuse and Northwestern are in the hunt. Expect his coach and dad, John Mannion, to hand him more responsibility this spring.

Haines last season proved to be a more-than-able replacement for two-time all-state back Dawson Jolley, earning all-state honors himself while running for 1,620 yards and 21 touchdowns. Playing alongside a potential all-state quarterback in Blake DeBisschop and a bevy of talented receivers, teams cannot load the box to stop him, and the Oregon State preferred walk-on could have a big finish to his high school career.

Pothier went from unknown and undersized sophomore to start the 2019 season to one of the state’s top underclassmen, running for a team-high 1,176 yards and 19 touchdowns and earning first-team all-Pacific honors. He spent the long offseason sculpting himself for what he hopes will be a big junior year, adding about 20 pounds of muscle. “Price is a stud, and his transition to his junior year has been pretty impressive,” Tigers coach Kevin Hastin said.

In a wing-T offense designed to share the ball among a wealth of players, Peden managed to stand out last season, garnering Pacific Conference offensive player of the year honors after rushing for a team-high 852 yards and 10 touchdowns. He’ll be the lead back again for a Bowmen team that was expected to be among the favorites for the 6A title before 2020 happened, and if Sherwood goes unbeaten in its six games, he’ll have played a big part.

Walker last season caught 72 passes for 1,010 yards and 11 touchdowns — most among returning 6A receivers — and was a second-team all-state selection, earning a preferred walk-on offer from Oregon State. Whether coach Bob Boyer moves him to quarterback or leaves him at receiver, Walker will be an integral part of the Beavers’ offense before becoming a collegiate Beaver in the fall.

You always have to believe whoever is Jesuit’s lead back has a chance to win this award — especially when running behind a line led by Oregon preferred walk-on signee Charlie Pickard. Rincon sat behind all-state back Kade Wisher and 1,000-yard rusher Ted Atkinson last season, but as the Crusaders’ top returning rusher, he figures to get the first crack at being the No. 1 back.