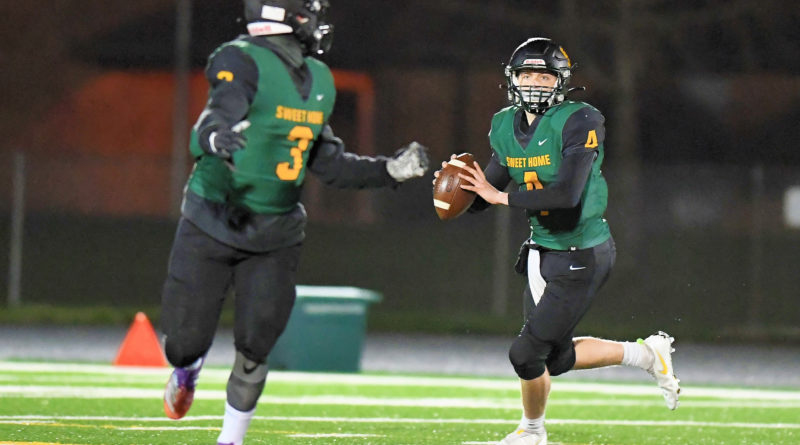 Here, we examine some of the top offensive player of the year candidates in Class 4A.

Noga last season was a first-team all-state wideout in helping Hidden Valley reach the 3A final, making 76 catches for 1,331 yards and 15 touchdowns. His 18 catches in the state final set a championship-game record. He will soon join his former quarterback, Sam Vidlak, at Oregon State after signing a preferred walk-on offer, but not before having one final big season with the Mustangs.

Tyler spent the long offseason traveling to Texas to play in a showcase game at Texas Stadium. He might return to the Lone Star State one day in a college uniform after signing with Western Oregon. First, he’ll try to build off a junior season in which he threw for 1,264 yards and 15 touchdowns.

Since becoming a starter in the fourth week of his freshman season, Hage has done nothing but grow as a player. He was first-team all-Oregon West as a sophomore, passing for 1,011 yards and 10 touchdowns, and if his trajectory continues its upward climb, he’ll have a big spring that propels him into an even bigger senior season.

The Spartans have plenty of skill-position talent, but Tuski stands out after a sophomore season in which he rushed for 1,400 yards and scored 23 touchdowns. He’s a monster in the weight room (he squats close to 500 pounds), and a big junior season, however brief, could open recruiting doors that his coach, Frank Geske, can’t believe haven’t opened for him yet.

Older brother Sam is now in Corvallis prepping for his freshman season with Oregon State, accelerating Nate’s transition to take over as Mustangs quarterback. If Nate has anything close to the success Sam had last season, he could add a player of the year award to the co-player of the year honors Sam garnered as a junior.

The reigning Skyline offensive player of the year and Eastern Oregon signee doesn’t get to show off his arm too often while running the Vikings’ veer attack, but his mastery of the triple option and passing ability set him apart.

Flippen made his mark on defense last season for the 4A state runner-up Braves, who had four senior skill-position players make the all-state team, meaning he wasn’t needed as much on offense. This year, though, Flippen will take on a starring role in what is typically one of the classification’s top offenses, making him a factor in the offensive player of the year race.

Orr put in a ton of work during the offseason as he weighs offers from Willamette and several West Coast junior colleges. If he leads the Hornets to victory in their Klamath Basin rivalry game against Mazama, it could jump-start a senior season that catapults him to the award.