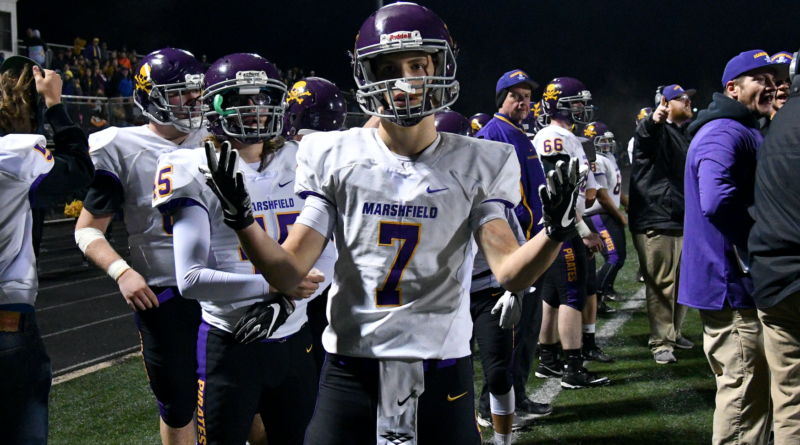 Here, we examine some of the top defensive player of the year candidates in Class 4A.

Exline is ready to make up for lost time after missing most of his junior season because of an injury. He helped spearhead the Braves’ run to the 2018 state title when he had 17 tackles for loss and led the team with six sacks and 13 hurries. After signing with Eastern Oregon in early February, he’s looking to have a huge senior season to wrap up his high school career.

It’s been a quarter-century since Monty Button won the 1995 defensive player of the year award in a Marshfield uniform. This season, the Pirates have not one, but two, contenders for the honor, and Waterman — the only sophomore named to the all-state first team in 2019 — will have two chances this year to win the award. He had a team-high 82 tackles (17 for loss) and 10 hurries as a sophomore.

Stephenson was a Sky-Em co-defensive player of the year and a first-team all-state defensive back last season, finishing with 57 tackles and three interceptions. His coach, Frank Geske, describes him as a “little, quick, aggressive guy who makes plays all over the field,” and if he does that again during the short spring season, he could become the first Marist Catholic player since Logan Mayers in 2010 to win the state defensive player of the year award.

Flippen has been on varsity since his freshman year, when Banks won the state title. As a sophomore, he went back and forth from cornerback to safety, finishing second on the team with 90 tackles (five for loss) and recording three interceptions. He’ll become the featured back on offense this spring, but that shouldn’t affect his play on the defensive side of the ball.

Ashpole made second-team all-state last season as a linebacker, and, according to Gladiators coach JJ Jedrykowski, the postseason accolades could have been even better. Standing 6-4 with “an even longer wingspan,” quick and agile, “one of our best athletes on the field at any given time,” Ashpole will be a handful again for Gladstone opponents.

Two seasons ago, Niblett was thrust into a starting role when the Pirates took on Banks in a Class 4A semifinal. He’s been starting both ways since, making the all-state second team at defensive back in 2019 with 36 tackles and five pass breakups. His performance on both sides of the ball will be key for Marshfield, and if he maintains his play in the secondary, he could challenge for top defensive honors.

The Mustangs were better-known for their offensive prowess in their run to the 3A final last season, but Tackett could not be ignored with his work playing the “Spur,” or the hybrid safety position, in the 3-3-5 defense Hidden Valley runs. He received first-team all-league and second-team all-state recognition after finishing with 80 tackles, including a team-high nine for loss, and should have another solid season this spring.

Niemi played a big part in the Cheesemakers pulling a first-round shocker in the state playoffs last season as a No. 15 seed, and he finished the season with six sacks, two forced fumbles and two fumble recoveries. That performance put him on the map, and another stellar season should garner him the statewide recognition he didn’t receive in 2019.