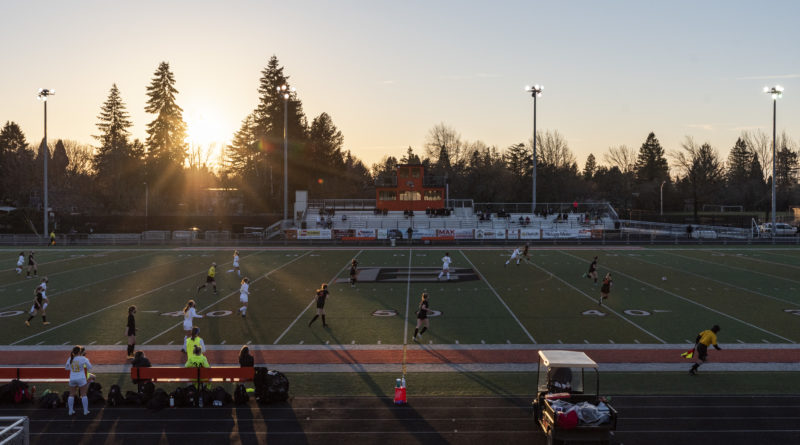 On a crisp March evening that felt transported from the fall, Season 2 of the OSAA high school sports year kicked off Monday across the state, with thousands of athletes thankful to finally be able to take the field or court.

From Beaverton High School, where the Beavers hosted a girls soccer match against Barlow, to David Douglas, where Kayla Hambley made her long-awaited debut as Central Catholic’s volleyball coach, and from Rogue River and Klamath Falls in Southern Oregon to Madras and La Pine in Central Oregon, it was a day to celebrate.

“Honestly, earlier this year, I didn’t think so,” said Barlow senior Mikayla Topaum, who scored two goals to lift the Bruins to a 2-0 victory over Beaverton. “The thought that we might not be able to have a senior season, especially when we were looking forward to the team we have, not having the chance to prove ourselves would have been heartbreaking.

“I’m just really excited to be out here with everybody and be able to play. It’s just a blessing to be able to come out here, even just for a shortened amount of time. I’m just glad I got a senior season.”

For teammate Abi Hoffman, whose last time on a high school soccer field involved tearing the ACL, MCL and meniscus in her right knee in a second-round playoff match almost 16 months ago, the return to the field was extra special.

“No, this was not like any other match,” said Hoffman, who assisted on both of Topaum’s goals. “Looking back before the game, you realize that anything in this life that consists of socializing with people, interacting with people, can be ripped straight out of your hands. Just coming out here, the music going, it just gets your blood flowing. You’re ready to go.”

Plenty of work went into getting the season started

While the players celebrated their return to action, coaches and administrators could finally breathe a small sigh of relief that all the protocols and safety precautions they’d taken over the past month allowed for all this to take place.

“Oh my gosh, there’s a lot,” said Beaverton girls soccer coach Jennifer Kirwan before letting out a hearty laugh. “There’s a lot of things to do. It’s honestly a team effort. Communication is the key to everything. Our athletic administration has been working so hard to get us even out here, trying to help with all the logistical pieces — not just with us, but the fans and all the pieces, working with other coaches, to make sure this is all possible.”

The Beaverton School District allowed a limited number of people from the host school to attend the match, each having to complete an online contact tracing form before entering the stadium. Players, officials, coaches and fans had to wear masks throughout the match, with fans and videographers allowed only on the side of the stadium opposite the team benches.

“We wish we could have all the fans here for both teams and create an environment,” Kirwan said. “But we want to take advantage of every opportunity that we can. Moving forward, we’re preparing for each match, but we’re also celebrating the fact that we’re even out here.”

Mountainside volleyball coach Brooke Mayo — whose team traveled to Southridge and won its opening match 25-13, 25-10, 25-12 — described some of the safety protocols in place for her sport, which has more stringent occupancy requirements as an indoor activity under Oregon Health Authority guidelines.

Her varsity team of 14 players traveled separately from the JV and JV2 squads and had to wait on the bus for their matches to finish and everyone to clear the gym before they could disembark and enter the facility.

From there, Mayo had to create a whole new prematch routine to stagger players through warmups and remain socially distant. Even timeouts are different — while she gathered the six players on the court for one discussion, her assistants went over strategy with the bench players.

And the quiet — with only a handful of Southridge parents in the stands and no cheerleaders or students — took getting used to, although Mayo said, “our bench was really good at cheering and staying engaged in the match. It was just about creating our own energy.”

“It’s definitely different,” Mayo said. “But we’re just thankful for the girls being able to play. We have five seniors returning this season, and we talked about what’s our mindset for this season, what’s our goals? And they talked about how they were grateful for the three years they’ve had together, the amazing state tournament they had last season, and now they want to make sure the new players feel this is a special season for them.”

Hambley gets victory in her coaching debut at Central Catholic

Hambley never would have thought she’d have to wait an extra six months to make her debut as Central Catholic’s coach, taking over for Hall of Famer Rick Lorenz after serving on his staff the past few seasons.

“I’ve had many years being mentored by some amazing coaches,” Hambley said after the Rams defeated David Douglas 25-8, 25-8, 25-5. “It felt strange to be in charge. It’s a little different representing the Rams as a head coach. That piece will take some getting used to.”

David Douglas, unlike Beaverton, did not allow fans to attend the match — only the two teams and their coaching staffs, match officials and three support staff were allowed in the gym — but Hambley said about 60 people tuned in to watch the match on Facebook Live.

“It was hard not having the parents in the stands to cheer, but I know they were there in spirit,” she said.

Since the OSAA initially pushed the start of fall sports in early August to the spring, the uncertainty over whether a 2021 sports season would take place weighed on the minds of coaches and players.

Barlow girls soccer coach Jay Jacobsen, like many coaches statewide, tried to remain as optimistic as he could during his constant check-ins with his team.

“They had lots of questions over the summer — are we even going to have a season?” he said Monday.

“But I had a good feeling that we’d be able to get it done, and the group believed it as well. I’m extremely happy for them that we’re out here playing. It’s all about them. They’re the players, and these are great memories for the girls to have, so I’m happy for them.”

The Bruins are a veteran group led by Topaum (Northern Arizona) and Hoffman (Portland State) that reached the quarterfinals last season, and they fully expected to challenge for the program’s first state championship — Barlow hasn’t reached the semifinals since 1992 and has never played for a title.

The schedule they’ve crafted before the culminating week in early April is comprised entirely of 2019 playoff teams, including three-time defending champion Jesuit and 2019 runner-up Mountainside.

“I’ve been looking forward to these games and making memories of a lifetime,” Hoffman said. “There’s much more where tonight came from, and we’re ready to show it.”

It was the youthful Beavers who dictated play to start both halves, dominating possession and generating early scoring opportunities.

“Obviously, we just started training not too long ago, and the product is not perfect yet,” Jacobsen said.

Once in each half, though, the Bruins’ two stars conjured up a little bit of magic to create both goals.

In the 25th minute, Hoffman drove up the right sideline on the counterattack before centering the ball to Topaum at the top of the penalty area. Topaum spun off her defender, found a sliver of space and lofted a left-footed shot out of reach of Beavers keeper Brielle Fernando.

Twelve minutes after halftime, Beaverton senior Ella Baker had a point-blank shot from the penalty spot stopped by a diving save from junior Camryn Waibel. That was the Beavers’ best chance at an equalizer, and Topaum put the game away with 13:01 remaining when she perfectly timed her run off a quick free kick taken by Hoffman near midfield, settling the ball and arcing a shot from 20 yards into the top-left corner.

“Right when we started playing together our freshman year, we just had a connection,” Topaum said. “I’m just excited to be on the field with her. It’s just fun to be out there with each other.”

Beavers look to gain experience in preparation for fall season

Those are the connections the Beavers, who have four seniors on their 20-player roster, hope to build over the six-week season and carry into an anticipated fall 2021 campaign.

“We have some excellent talent that we’ve just barely tapped into,” Kirwan said.

“Today was a little bit different,” Baker said. “We’ve been waiting for months to finally make it out here. Honestly, I never thought we’d get to play games. I was really excited to come back out here — I had nervous butterflies and wanted to play well.

“This is really a special year. I love soccer here at Beaverton, and I was really looking forward to my senior year. So, I’m glad we get to have this season, even though it’s short. I’m just happy to be out here, to get the opportunity to play soccer and be all together.”