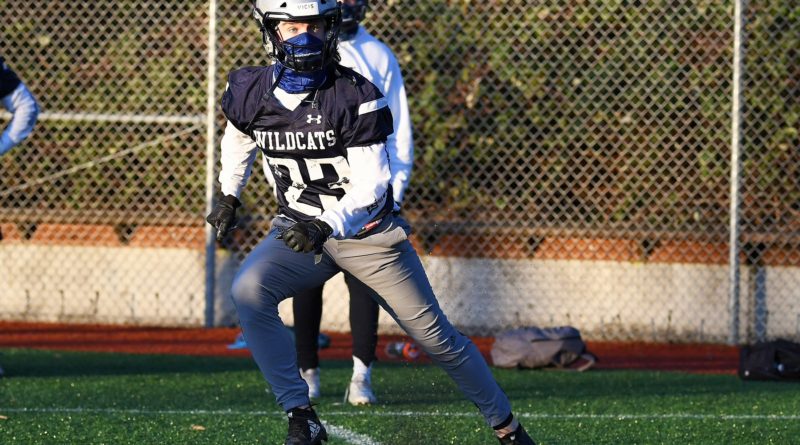 One of the most dangerous players in the Mid-Willamette Conference, McCarty is a true dual-threat quarterback who passed for 1,783 yards and 14 touchdowns and ran for 11 scores last season en route to first-team all-conference honors. His continued improvement will be key to the Foxes building upon their state semifinal appearance in 2019.

Woitte was second-team all-state as a junior, proving what old-fashioned grit can do as he fought off double and triple teams to help the Comets become the second-stingiest defense in 5A last season (11 points per game) and reach their first state championship game.

Overholt was first-team all-NWOC West and honorable mention all-state last season. The three-year starter was among the team’s leaders in tackles with 62 (three for loss).

Galago transferred from Class 4A Marist Catholic, where he made the all-Sky Em first team on defense with 32 tackles (eight for loss), to join a veteran Colts line. The Southern Oregon signee will play both ways, and at 6-foot-4 and 265 pounds, he’s more than ready for the physical challenges of 5A football.

King provided a glimpse of what Rams coach Steve Pyne believes the team will see over the next two seasons from one of the fast-rising prospects in the state with his four-catch, one-touchdown performance in the state championship victory over Lake Oswego. With all-state receivers Silas Starr and Kalvin Souders having graduated, King’s role in the Rams attack will increase significantly.

Two seasons ago, Niblett was thrust into a starting role when the Pirates took on Banks in a Class 4A semifinal. He’s been starting both ways since, playing defensive back — a position at which he earned all-state second-team honors in 2019 with 36 tackles and five pass breakups — and wide receiver, where he caught a team-high 45 passes for 613 yards and three touchdowns.

Jones was eased into the Timberwolves lineup last season while backing up Blake Jackson, but the starting job is now his, and he’ll look to build upon his modest numbers (39 of 75 for 685 yards, eight touchdowns, one interception) from his sophomore season.

Masters received all-league recognition on both sides of the ball last season, garnering second-team honors as a cover corner with 27 tackles, six pass breakups and two interceptions, and honorable mention at receiver (31 catches for 512 yards and six touchdowns). He has received interest from several Division II schools.

Brown was a two-way all-Metro performer last season, garnering second-team honors on defense (16 tackles) and third-team honors on offense. He recently signed with Montana as an offensive lineman, with Grizzlies coach Bobby Hauck calling him “just what we’re looking for in our offensive line group.”

A first-team all-NWOC East selection as a junior, the 6-foot-2, 190-pound Rosumny was third on the 5A regular-season leaderboard in passing yards (1,858), throwing 20 touchdowns and completing 65 percent of his passes. He’s headed to Pomona College in Claremont, Calif., in the fall, one of the West Coast’s most prestigious colleges and home to the Division III Sagehens.

Davis returns from a broken collarbone that cut short his junior season but didn’t curtail his recruiting — he signed with Western Oregon in early February after running a laser-timed 4.41 seconds for 40 yards at a National Preps Collegiate Showcase event in October.

Former coach Don Johnson handed the keys to the Democrats offense to an untested sophomore last season, and Fair delivered a solid performance, throwing for 623 yards and eight touchdowns in leading the team to its first winning season since 2016. New coach Houston Lillard praised Fair’s offseason work and sees him eventually becoming a nationally recruited prospect.

Dahlback has become one of the state’s top kickers and punters, earning first-team all-Metro honors as a junior at both positions and first-team all-state at punter (second-team at kicker). He went 44 for 45 on PATs and kicked seven field goals, including four during the team’s run to the 6A quarterfinals.

At 6-foot-3 and 280 pounds, Davis had scholarship offers as an offensive and a defensive lineman — he was a second-team all-state selection on offense — ultimately signing with Southern Oregon. Expect him to dominate again this spring in the trenches.

Martin completed more than 61 percent of his passes (157 of 256) and threw for 1,834 yards and 16 touchdowns in earning all-Three Rivers honorable mention as a junior. He signed with Southern Oregon in early February, and Pioneers coach Dustin Janz believes he’ll show the fruits of his offseason work in this shortened season.

Going was a unanimous first-team all-PIL selection last season, throwing for more than 2,000 yards and leading the Generals to their first outright PIL title since 2014. He worked with West Linn coach Chris Miller over the offseason to get more zip on his throws in anticipation of getting college coaches’ attention.

As a junior, Dart was a first-team selection to the all-NWOC West and 5A all-state teams. He led Wilsonville in receptions (52), receiving yards (886) and touchdowns (12), and even with a new quarterback taking over, Dart will be one of the state’s most dangerous receivers.

After helping spearhead the Braves’ run to the 2018 Class 4A state championship with 17 tackles for loss, six sacks and 13 hurries, Exline was injured in the first Cowapa League game in 2019 and missed the rest of the season. He signed with Eastern Oregon last month and ranks among the favorites for 4A defensive player of the year this spring.