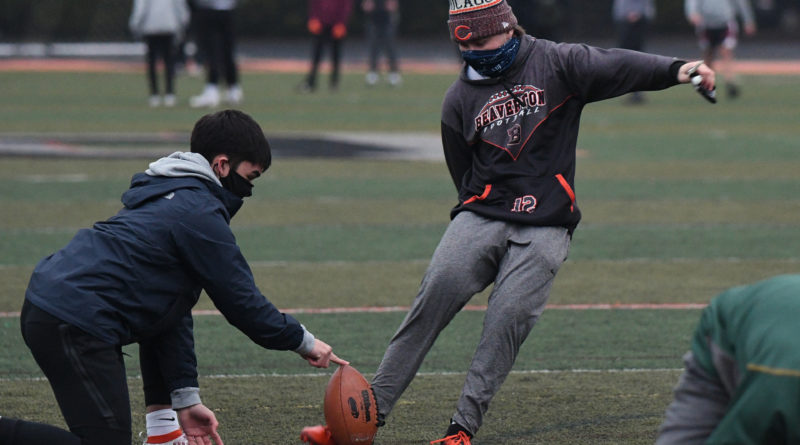 Over the next week, we’ll be taking a position-by-position look at some of the top players in Oregon high school football. Our ninth list focuses on the kickers and punters.

There are hundreds of standout football players in Oregon and these lists are not intended to be comprehensive! Use the comments section to discuss the other kickers and punters worthy of fans’ attention in 2021.

Little last season made the all-state team at three positions, including the second team at punter, where he averaged nearly 32 yards per punt. “Brody is a quiet leader, a strong and explosive player who is a role model to his peers,” said his coach and father, Shea.

McDonald is an all-NWOC West honorable mention selection (31 for 34 on PATs in 2019) who has caught the eye of Chris Sailer Kicking, a national evaluating service that rates him a 3½-star prospect, saying that “Cade shows that he can hit a nice ball at times on both field goal and kickoff. Accuracy is his strength. As Cade continues to get stronger, he will challenge at the next level. The tools are there to do so.”

Cornford earned all-Greater Oregon second-team recognition at punter last season for the 4A state champion Tigers. La Grande coach Rich McIlmoil hopes Cornford will become more of a vocal leader in his senior year. “He gets into the aggressive nature of football,” McIlmoil said. “He’s a real skillful player, fast and athletic.”

As a sophomore, Evans made the all-Pacific second team at punter, averaging 36.9 yards per punt with a long of 58 yards. He is one of the state’s top wrestlers, winning a 6A state title at 132 pounds in February 2019 and traveling to Des Moines, Iowa, over Halloween weekend and winning the 152 division at the Brian Keck Memorial Preseason Nationals. “He’s a very tough competitor and big-time player for us,” Tigers coach Kevin Hastin said.

Ferreyra had a solid junior season in earning first-team all-Three Rivers honors at punter and second-team recognition at kicker. He averaged 35.1 yards per punt, put almost half of his kickoffs into the end zone for touchbacks and made 5 of 7 field goal attempts with a long of 47 yards. “A difference-maker in the kicking game,” Pioneers coach Dustin Janz said. “He will make a tremendous impact with his foot, and he’s an amazing athlete. We hope to tap into his abilities on both offense and defense this year as well.”

Neron, who was battling with junior Mason Warren for the starting quarterback job, made the all-Southwest second team as a punter last season.

Is it possible Cascade has an athlete who could one day play on Sundays? Cougars coach Brandon Bennett certainly thinks so, and we saw a glimpse of his potential last season when he went 29 for 29 on PATs and 4 for 4 on field goals, with a long of 40 yards. “I tell him all the time, he has an NFL leg,” Bennett said. “I’ve played with NFL kickers. He stands out above all of them.”

Johnson handled all the kicking duties for the Titans as a junior and received all-Mountain Valley honorable mention as a punter and placekicker, averaging nearly 30 yards per punt and going 36 for 38 on PATs and 4 for 6 on field goals with a long of 32 yards.

Mondragon, who also played striker for the JV soccer team, joined the football team about a month into the 2019 season. By season’s end, he’d made the all-Mt. Hood first team and earned all-state honorable mention, going 52 for 55 on PATs and 1 for 2 on field goals.

Levesque kicked the winning field goal in the 2018 Class 5A state final as a freshman. He followed with a solid sophomore season, garnering all-state honorable mention while going 57 for 64 on PATs and 3 for 4 on field goals, while adding punting duties (34.7-yard average). Expect more of the same in his junior campaign. “It’s always so comforting to have a great kicker on your team,” Colts coach Justin Starck said. “It makes you feel good.”

Kartub converted all 37 of his PATs last season and made three field goals with a long of 46 yards en route to earning first-team all-SWC honors and all-state honorable mention. The Air Force signee’s leg is so valuable that he only kicks for Sheldon. “He would argue that he can do some other things, but he’s just a kicker for us and he’s a great kicker,” Irish coach Josh Line said. “He’s worked really hard to put himself in the position he’s in.”

Noga last season made the all-league team at three positions, including at kick returner and punter. He averaged 23 yards per kickoff return with one touchdown and 38.2 yards on the rare occasion (10 in 14 games) that he was asked to punt for the 3A state runner-up.

As a junior, Hofenbredl was an all-Mid-Willamette second-team honoree at kick returner (23.4-yard average, including an 80-yard return for a touchdown) and kicker, making 29 of 31 PATs and two field goals.

Khouri stepped in as punter for last season’s 6A state semifinal against Lake Oswego, averaging nearly 30 yards per punt. He will get the job full-time this season.

Graziano was a third-team all-Metro selection last season after going 36 for 43 on PATs and making 2 of the 4 field goals he attempted.

Burgos moved to Gladstone before his sophomore year and only wanted to be a kicker. Then he became a great punter, too — good enough to add first-team all-Tri-Valley punter honors to his second-team recognition as a kicker. Oh, and he was too athletic, so the coaches convinced him to play an every-down position. He ended up starting on defense last season. This year? He will be in the quarterback conversation. “He’s a kid who won’t come off the field for us,” Gladiators coach JJ Jedrykowski said.

Washburn received all-Pacific honorable mention at all three positions he played last season, including placekicker — he made 17 PATs and two field goals. “Matthew has matured in many ways and is poised to have an outstanding senior season,” Grizzlies coach Ryan McIrvin said. “We believe he can be a difference-maker on both sides of the ball as well as in the kicking game.”

Hoskins has blown up on the recruiting circuit during the offseason, moving up to No. 10 among Class of 2022 punters nationally by Chris Sailer Kicking and earning a four-star rating from ProKicker.com after a strong showing at Kick Vegas XXXVI, a kicking showcase camp. Chris Sailer Kicking wrote, “Max has an ideal frame for a college-level punter. He averages 40+ yards with solid hang time. He also shows that he can hit a D1 level ball. One of the more consistent punters in the Class of 2022.”

A second-team all-PIL choice as both an offensive and a defensive utility man last season, von Arx also was a first-team selection at punter. The multitalented von Arx was a starter on Grant’s varsity basketball team as a freshman, when the Generals took the consolation championship at the Class 6A state tournament.

Rasmussen is a soccer player who helps with placekicking duties for the Hornets. He earned second-team all-Skyline honors last season after going 24 of 27 on PATs.

As a kicker, Ahman made the all-NWOC East first team last season for the Falcons, helping them advance to the 5A state playoffs.

McKee last season made the all-Mountain Valley team as a kicker — first-team selection, going 15 for 17 on PATs and making two field goals — and punter, where he received honorable mention. Chris Sailer Kicking rates him as a 4½-star prospect, saying about McKee, “Soren hits a college-level ball on field goals, a strength. He gets the ball up well and easily has 50+ yard range.”

Schoppe became a trusted kicker (80 of 81 on PATs, made both field goal attempts) for the Crusaders as a sophomore.

Dahlback has become one of the state’s top kickers and punters, earning first-team all-Metro honors as a junior at both and first-team all-state at punter (second-team at kicker). He was 44 for 45 on PATs and kicked seven field goals, including four during the team’s playoff run. “He’s had a huge part in us winning some games the past two years,” Mavericks coach John Mannion said. “He’s one of the best kickers I’ve coached. He’s someone who can really change games for us.”

Rangel is a two-sport standout in the fall for the Warriors, starting for the soccer team and making the all-Mid-Willamette honorable mention list as a placekicker, going 40 for 44 on PATs.

Schlottmann was an honorable mention all-Pacific tight end last season, but his future lies as a placekicker. He was a second-team selection, going 21 for 21 on PATs. In the offseason, he attended several Chris Sailer kicking camps, a national evaluator that has given him a four-star rating, projecting him as a Division II prospect. “He has put in such a great offseason,” Crimson Tide coach Ian Reynoso said. “He’s added about 20 pounds and is strong, over that 1,000-pound total we shoot for, but hasn’t lost a speck of speed. He has a ton of potential ahead of him.”