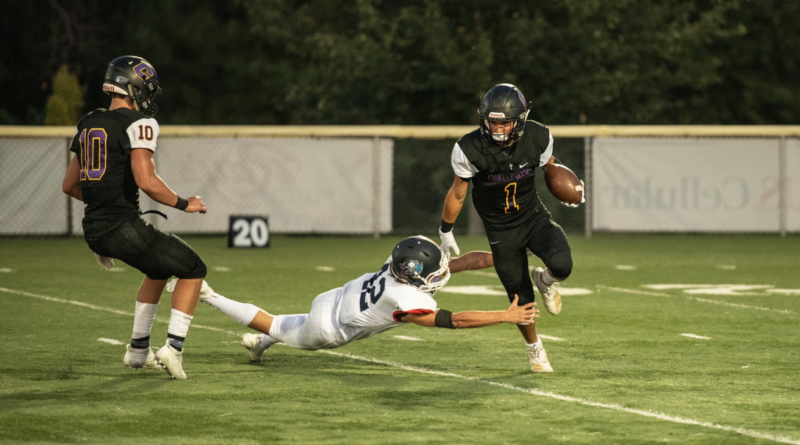 Leading up to Friday’s Week 1 games, we’ll be counting down our rankings of the state’s 100 best players overall. Note that this is just one reporter’s list, and the rankings were made simply to have fun and spark debate — another person’s order might be very different, and we know there are dozens of other players not listed who also easily could have made the top 100.

The Mustangs trade one Vidlak under center for another a year earlier than expected. Nate was a varsity contributor last season, catching 41 of older brother Sam’s passes. With Sam having graduated early and enrolled at Oregon State, Nate will run the show and build experience for his senior season in the fall.

Fullbright, a 3A co-offensive player of the year last season, went over 100 yards in 11 of 12 games and finished with 1,777 yards and 33 touchdowns rushing. He also caught 15 passes (two touchdowns) out of the backfield in helping the Eagles win their first title since 2011.

The Southern Oregon signee was a two-way difference-maker for the Cavemen as a junior, making the all-Southwest Conference first team on offense and recording 23 tackles and six sacks on defense.

Jordahl followed a sophomore season on the gridiron in which he earned 5A all-state honorable mention with a runner-up finish at 215 pounds at the state wrestling championships. Two more years like that could lead college recruiters to flock to Central Point.

Levesque started his career with a bang, kicking the winning field goal in the 2018 Class 5A state final as a freshman. He followed with a solid sophomore season — 57 for 64 on PATs, three field goals, 34.7-yard average on punts — and has become one of the Northwest’s top kicking prospects.

A second-team all-state selection in 2019, Tuski hopes his junior year will be a continuation of a sophomore season in which he gained 1,206 yards on the ground and reached the end zone 23 times.

McGuire ended last season as a starter at defensive end and had big games in the semifinal win over Jesuit (five tackles, 1½ tackles for loss, forced fumble) and the final against Central Catholic (four tackles, forced fumble). He’s poised to become the next breakthrough defensive star for the Lakers.

Quillin battled injuries throughout his junior season and now has six weeks to put up strong senior film to bolster his college chances.

Olvera has the unenviable task of stepping into the void created by the graduation of two-time 6A offensive player of the year Casey Filkins. As a warmup act, Olvera had 72 carries for 444 yards and four touchdowns and finished with 11 catches for 76 yards and a score playing as a slot or outside receiver at times for the Lakers last season.

Kartub converted all 37 of his PATs last season and made three field goals with a long of 46 yards en route to garnering first-team all-Southwest Conference recognition and 6A all-state honorable mention. The Air Force signee’s leg is so valuable that he only kicks for Sheldon, even though he’s talented enough to play other positions.

Compton played quarterback as a sophomore, then moved to receiver last season to make room for Ian Spalding. Under tragic circumstances, Compton makes his way back under center for his senior season.

The 6-4, 185-pound Anderson was second-team all-PIL on offense as a utility player in 2019. He led the Democrats last season with four touchdown catches and averaged more than 26 yards per reception. He signed with Portland State in February.

Delgado, an NWOC East co-lineman of the year in 2019, anchors both lines for the Broncos and is a team leader, channeling the team’s frustration when the tackle season was initially scrapped before the district opted in late last week.

Indell has been making an impact for the Wolverines since his freshman year. He’s always been a defensive stalwart, but he also spent time at running back last season and made the most of it by running for 964 yards and 11 touchdowns.

Voltin is one of the busiest people on the Stayton campus — he plays three sports (football, basketball and baseball), serves as a stage manager for school plays, sits on the student council and is a member of the National Honor Society. He somehow found time to make the 2A all-state first team on offense and third team on defense as a junior and receive a walk-on offer from Oregon State.

Lee earned a scholarship from Eastern Oregon primarily for his work directing Mazama’s triple-option veer, but he also was an all-conference defensive back who will again pull double duty for the six-time defending Skyline champion Vikings.

Lopez served as one of the anchors of the Lakers’ defensive line last season, earning second-team all-Three Rivers recognition and drawing interest from small college programs in the Northwest.

Shufelt last season was first-team all-NWOC West and earned honorable mention on the 5A all-state team on defense after tying for the team lead with 16½ tackles for loss and making a team-high 4½ sacks. He made a name for himself at the Blue-Grey Football All-American Bowl in December.

Culbertson signed with Idaho to throw the shot put and discus, but he easily could suit up for the Vandals football program after being named the Pacific Conference offensive lineman of the year and earning second-team all-state honors as a junior to go with second-team all-conference recognition on defense.

Our first group of players finishes with a three-way 3A all-state honoree who last season made the first team as a kick returner (three touchdowns on 23 punt returns with a 14.5-yard average) and the second team on offense (45 catches for 910 yards and 15 touchdowns) and defense (seven interceptions, 35 tackles).