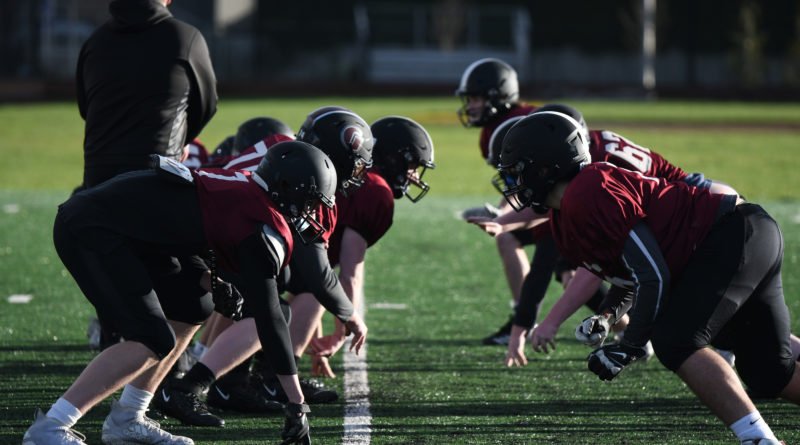 With no state championships on the line and league boundaries thrown out the window because of the COVID-19 pandemic, regional rivalries steal even more of the spotlight in this shortened 2021 spring high school football season. We kept that reality in mind as we selected our 25 games to highlight.

The first game on our list has been likened to a sibling rivalry between district foes. Barlow opened in 1968, and since playing its first varsity season a year later, it was definitely treated like the little brother. The Gophers won 20 of the first 23 matchups, but since 2014, the Bruins have owned big brother, winning six in a row to creep to within 31-19 in the all-time series.

Hidden Valley returns to its longtime home in the Skyline Conference this season after a two-year move to 3A under the OSAA’s new rule that allowed struggling programs to drop down. The Mustangs come back with a loaded roster to face the six-time defending conference champion Vikings in what would have been an important game with playoff seeding implications.

These Southeast Oregon rivals have met regularly over the past 50 years, skipping only a four-year period from 1990-93 when Vale dropped to 2A. The Vikings have dominated the past half-century, winning two-thirds of their 48 meetings (32-16), but the Hilanders won last season, 27-8.

We’re looking forward to watching two of the city’s top running backs — Lincoln’s Charles Willmott and Jefferson’s Damir Collins — in this latest edition of the 111-year-old series. The teams have met 104 times, with the Democrats owning a 69-33-2 lead, including a 50-18 romp last season that ended the Cardinals’ win streak at five games.

The “Highway 30 Hootenanny” pits two longtime rivals just 12 miles apart along the Columbia River. It’s a rivalry the Columbians have dominated over the years, owning a 60-24-3 lead, but the teams have split the past four regular-season matchups, with the Tigers winning 13-8 in 2019.

The Indians open and close their season with a couple of rivals — Wilsonville in Week 1 and traditional “Seven Mile War” rival St. Helens in Week 5 — but in between is this intriguing matchup with the Cougars, who would have been a 5A title favorite in their first year dropping down from 6A.

The two Klamath Falls schools didn’t start meeting on an annual basis until 1998, and while the Hornets lead the all-time series 16-12, the Vikings have won six of the past seven matchups — including a 14-10 thriller a season ago that came down to a fourth-and-goal play when Mazama scored from the 1-yard line in the final minute.

For two decades, the Pirates held the upper hand in the “Civil War” rivalry, but in recent years, it’s the Bulldogs who have dominated, having won nine of the past 10 meetings — including last season’s 51-6 rout — entering the 140th edition of the matchup, which dates to 1907. Marshfield leads the all-time series 87-42-10.

This should be a fantastic matchup between the Lancers, who won the 2018 Class 2A state title and reached the final last season, and the reigning 3A champion Eagles. Both teams return several all-state players, meaning there shouldn’t be much drop in quality in the season opener for both teams.

Since Medford split into North and South in 1987, the annual “Black and Blue Bowl” has been one of the state’s great rivalries. The Black Tornado hold a narrow 18-16 lead in the series after ending a three-game losing streak to the Panthers in 2019.

This matchup features two of the best offensive minds in the state — first-year Lakeridge coach Spencer Phillips joins the program after serving as an offensive assistant for the NFL’s Philadelphia Eagles, while West Linn coach Chris Miller circles back after leaving the program to serve as an offensive coordinator in the short-lived XFL revival last spring.

These schools sit just four miles apart in North Portland, but for the past decade of this 96-year-old rivalry, the gap between the two teams has been much larger. The Generals haven’t lost to Jefferson on the gridiron since 2010, including last season’s 21-7 victory that lifted Grant to its first PIL title since 2014. The Generals own a 43-32-5 lead in the series.

Since the series resumed in 2006 after a 67-year gap when Lebanon dropped to 5A, it’s become one of the tensest rivalries in the state (in a good way). The past four games have been decided by a combined seven points — the Foxes have won the past three to take an 11-9-1 series lead — and nine of the 14 meetings since its resumption have been one-possession results.

The past and the future of the Metro League collide at Cronin Field as the Crusaders, winners of seven consecutive league titles, play host to an up-and-coming Mavericks program that served notice of its status with a victory over No. 1 seed Tigard in last season’s state playoffs en route to a quarterfinal finish.

These Highway 99 neighbors are separated by seven miles, but since Sherwood began play in 1936, they’ve played only 13 times, with a 72-year gap finally ending in 2014 when the Bowmen moved up to 6A. Sherwood has won all six meetings since and owns a 9-4 advantage, but this might be Newberg’s best team in recent history, and this matchup could turn into a barnburner.

This was a great rivalry during the middle part of the 20th century. Tigard departed for the Metro League in 1979, and the teams met only three times until the Tigers and Lions were reunited in the Three Rivers League in 2014. Tigard has won four in a row in the series, including 42-21 last season, but West Linn owns the overall lead 29-17-3.

The city rivalry turns 50 this year, and it’s certainly been a tale of two halves. The Pacers won 19 of the first 23 meetings, but the past 23 have been a complete reversal of fortunes, with the Lakers winning 20 of them — including a 24-21 state quarterfinal victory in November 2019 that extended their win streak in the series to seven.

The Cougars showed signs they were on the rebound from a winless 2018 season, snapping a 22-game losing streak with back-to-back victories to close 2019. They opted to move down to 5A for the next two seasons, and this late-season matchup with Wilsonville could portend a fall 2021 NWOC West title battle.

Considered the longest-running rivalry game west of the Mississippi River, the “Battle for the Bridge” reaches its diamond anniversary this spring, with the 100th edition of this matchup that dates to 1921. The Pioneers hold a narrow 50-48-1 lead in the series, but the Lions have won the past seven meetings.

In any other season, this first-ever matchup between these two teams would have been a possible playoff preview between two championship contenders. With both teams emphasizing the run game — the Bowmen in the wing-T, the Crusaders with their power attack — this game might be done in less than two hours.

The Highway 43 rivals have met 60 times since the Lakers kicked off their program in 1951, and over the past decade, they’ve become two of the powerhouses in Class 6A. Lake Oswego has won the past three in the series, including a 20-17 nailbiter last season, and leads the all-time series 36-24.

Thurston’s traditional rival would be crosstown Springfield, but this matchup between the two-time defending 5A champion Colts and the perennially tough Irish should be the game of the year in the Eugene area. The schools renewed their longtime series in 2018 after Thurston dropped to 5A, and the Colts broke a 16-game losing streak to Sheldon last season with a 34-19 victory.

If this were a typical season, this game once again would have likely decided the Mid-Willamette Conference title, as it has the past two seasons since the Bulldogs dropped back to 5A. Instead, it’ll simply be one of the top 5A matchups of the season.

This district rivalry kicked off in 1996, four years after Tualatin opened, and in recent years, the Tigers have dominated. They’ve won five in a row — including 23-21 last season — and nine of the past 10 meetings to open a 15-9 lead in the series.

Playoffs or no playoffs, the Holy War is always one of the best games of the season. Last season, the Crusaders won for the second consecutive year, 42-26, to improve to 23-15-1 in the 61-year history of the series, but the Rams didn’t lose again en route to their first state title since 2014 and fifth all-time.