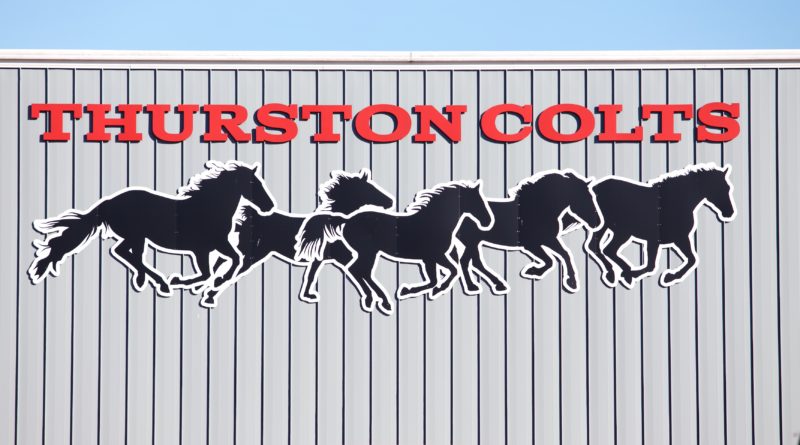 Over the next few weeks, SBLive Oregon will break down every 6A, 5A and 4A football team in the state in anticipation of a six-week season in March and April. Even if the season is postponed or canceled, we will continue to highlight more than a hundred teams and more than a thousand players in Oregon. Here’s our look at the Thurston Colts of the Class 5A Midwestern League.

Muggy was first-team all-state as a defensive back and led Class 5A in interceptions last season after coming on strong during the run to the 2018 title. “That mindset shifted for him — he wasn’t just trying to compete, he was trying to dominate,” Starck said. He should return to the defensive backfield, as well as a wide receiver spot — though Starck noted that Muggy didn’t emerge at safety until late in his sophomore year because his role as the JV team’s quarterback limited his varsity playing time. That experience could come in handy, as Thurston’s QB1 spot is wide open after Cade Crist’s graduation. “He’s got a quarterback mindset, also,” Starck said.

These are the three primary contenders to be the Colts’ next starting quarterback. Witham took the most first-team reps in fall 7-on-7 play over Bonar, who was Crist’s backup during both state title runs, and Boring, who was injured in the fall. “It’s hard as a sophomore; that’s a key position in terms of leadership and decision-making, but he’s got the tool set,” Starck said of Witham. “He’s got the mindset for it.” Bonar showed flashes near the end of the fall, Starck said, and all three will have a chance to seize the job. If none of them impresses, the job could fall to Muggy.

The Colts graduated all five offensive line starters, three of whom received all-state recognition. There’s another group of big men waiting to take their place — even bigger than last season’s crop, and with no drop-off in technical skills. The headliner is O’Donnell, a 6-foot-5, 315-pounder who made the all-state second team as a defensive tackle last season. He’ll play both ways this season, and Starck is downright excited. “The linemen are the key,” he said.

Another of Thurston’s seniors in the trenches, Galago transferred from Class 4A Marist Catholic, where he made the all-Sky Em League first team on defense and the second team on offense. He’ll again play both ways, and at 6-foot-4 and 265 pounds, he’s more than ready for the physical challenges of Class 5A football. “This kid is put together — he makes your eyes pop out when you see him,” Starck said. “From what I’ve seen on film, this kid is a game-changer.”

Knights started nine games at cornerback and returned kicks as a sophomore. “He’s a burner, he’s fast,” Starck said. “He’s got better moves and instincts and vision than anyone I’ve seen in a long time.” As a junior, he’ll reprise those roles and step into some reps at running back. “I think that he’s going to have a breakout season,” Starck said.

Windom plays tight end. And fullback. And inside linebacker. And outside linebacker. “He’s a Swiss Army knife,” Starck said. In the state championship game, the Colts’ long snapper had hand trouble, so Windom stepped in. “He didn’t miss a beat. He’s a kid that’s just clutch in every way,” Starck said. “You need about 11 Tanner Windoms, and then you have a championship team.”

Levesque kicked the winning field goal in the 2018 state final as a freshman. He followed with a solid sophomore season, garnering all-state honorable mention. Expect more of the same in his junior campaign. “It’s always so comforting to have a great kicker on your team,” Starck said. “It makes you feel good.”

With consecutive Class 5A state championships, Thurston is approaching dynasty status. The Colts’ first title run was a bit charmed; the second was utterly dominant. And as one great senior class moved on, another is ready to take its place.

It won’t be the same, of course. Cade Crist, Jake Riley, Santino Stranieri, Wesley Kommer and the rest of Thurston’s class of 2020 left an indelible mark on the program’s history. But there’s more than enough talent left to carry the tradition.

“We have another really exciting senior class, and I’m not just saying that to make them feel good,” Starck said.

With a line that’s bigger than before, skill players with as much potential as those they’re replacing and the experience and confidence that come from having a small role in two historic seasons, it’s hard to question Starck’s statement. In a virus-free world, the Colts might have added a third title to their trophy case last November. Sadly, we’ll never know.

What we should get to see is a snippet of how Thurston would have measured up against some of the state’s other top teams. The Colts will open their truncated season against Churchill and finish it against Class 6A superpower Sheldon.

Starck views the season as an important opportunity for his seniors, many of whom want to — and have the talent to — play at the next level, but who need fresh film to show that talent to college coaches.

“For a kid like Kross Galago, our transfer kid, he was playing 4A football, so people question the strength of competition,” Starck said, pointing to one example. “He needs to go out against solid 5A and 6A teams. He needs to go up against Sheldon High School players and show what he can do.”

“We’ve had a tremendous run of talent. It comes in waves. We’re a public school, and we’re not necessarily a perennial power. It isn’t as if we’ve been in the picture for the last two or three decades.” — Justin Starck