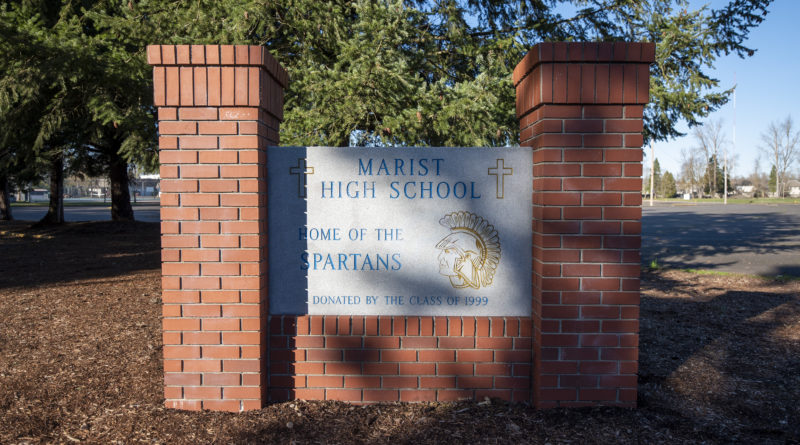 Over the next few weeks, SBLive Oregon will break down every 6A, 5A and 4A football team in the state in anticipation of a six-week season in March and April. Even if the season is postponed or canceled, we will continue to highlight more than a hundred teams and more than a thousand players in Oregon. Here’s our look at the Marist Catholic Spartans of the Class 4A Sky Em League.

Playoffs: Beat Seaside 20-13 in first round; beat North Marion 28-21 in quarterfinals, lost 56-31 to Banks in semifinals

Stephenson’s first start for the Spartans came three years ago in the playoffs. As a wide receiver, he was shut down by a future Pac-12 defensive player of the year (Talanoa Hufanga, then of Crescent Valley, now of USC). “Things have gotten easier for him since then,” Geske said. Stephenson was named to the 2019 all-conference first team as a receiver, defensive back and kick returner, and he was a league defensive co-player of the year and a first-team all-state defensive back. Geske describes him as a “little, quick, aggressive guy that makes plays all over the field.” Expect another massive season from Stephenson in every phase of the game.

Patterson led Marist Catholic in rushing yards as a sophomore before moving to the slot and leading the Spartans in total offense as a junior. Geske described him as a “glider,” but Patterson is by no means slight — at 6-foot-1, he’s up to 195 pounds and squats more than double that. “He’s not a little kid anymore,” Geske said. Patterson was second-team all-state last season, and he has the tools to make the hop to the first team in his final high school campaign.

Another second-team all-state player from 2019, Tuski’s junior year will be a follow-up to a sophomore season in which he gained 1,400 yards on the ground and reached the end zone 23 times. Like Patterson (and most of Marist Catholic’s starters), Tuski is a monster in the weight room, squatting around 500 pounds. Geske likened him to Herschel Walker and said, “He could be one hell of a linebacker, too. He’s a gem. I don’t know how in the world he isn’t immensely, heavily recruited.”

Laing backed up Max Campbell at quarterback for two seasons and now has a chance to take the place of the now-graduated Sky Em co-offensive player of the year. If he can overcome the tendency to try to do too much, Geske said, he could be very successful. “He’s got all the tools,” Geske said. “If he can overcome the fight-or-flight factor, he can be outstanding.”

The QB1 job won’t simply be handed to Laing; Greene, who led the Spartans’ JV team to an 8-1 record last season, will push for the role. “There are leaders that are born. He’s one of them,” Geske said. “He can pretty much do everything; he just hasn’t been given the opportunity yet.”

MacPherson has been the starting center for two seasons. Geske said he took his lumps as a sophomore and has become a leader among Marist Catholic’s big men. “He grew up a lot last year,” Geske said, and MacPherson was recognized for it with an all-league first-team nod.

Kimble is another senior who struggled as a sophomore starter before putting that experience to good use. He and classmate Will Blansett should form a formidable duo as the inside linebackers in Geske’s 3-4 defense. “Any driven kid hates failure,” Geske said of Kimble’s sophomore year. “He didn’t like how he played, and he transformed himself.”

Last season, Relling was a 6-foot-2, 185-pound sophomore halfback. Then, as Geske explained, “He hit a little growth spurt.” As a junior, Relling is 6-4 and 255 pounds, and he’ll be a starter on the defensive line. He’ll be a part of the rotation on the offensive line, too.

At 6-foot-3 and 275 pounds, Paslay was a dominant force last season as the Spartans’ starting nose guard. “He ended up being our best defensive lineman by a long shot as a sophomore,” Geske said. “Great hand placement, great motor.” Like Relling, he’ll get some action on offense to go with his starting duties on defense.

Geske recalled his team’s last dry patch and how other coaches were beating a path to him at scheduling meetings during that stretch. There was no such stampede last year.

“There were a lot of teams that wouldn’t play us,” he said. “You’d have to be blind to not recognize what we have.”

Geske has been frustrated by the pandemic-induced shutdown of football, but he said his squad has made the most of the delays with a vigorous weight-room program. It appears to be paying off, given some of the eye-popping numbers Geske mentioned his players having posted.

“The biggest thing is, have we lost the ability to block and tackle?” Geske said. “No one can do that right now.”

If those abilities are retained, then the Spartans should maintain their position atop the Class 4A food chain. If not, Geske said, then everyone else likely will be in the same situation, and the veteran coach still likes his team’s chances.

“We’re bigger, faster and stronger than we’ve ever been,” he said. “I’d rather play with big, fast, strong players than the alternative.”

With no league schedule, no playoffs and thus no hope for a redemptive postseason tangle with the Banks Braves — who have ended each of Marist Catholic’s past two campaigns — Geske is focused on simply being able to play football.

“I’m going to be so happy for the kids,” he said. “Just seeing them out on the field is going to be my main goal.

“However, they’re a heck of a lot more driven. They want to win every game.”

There’s no reason to think they can’t.

“There’s a lot of stuff that happens Sunday through Thursday, but Friday night, it’s about the Jimmies and Joes, not the X’s and O’s.” — Frank Geske