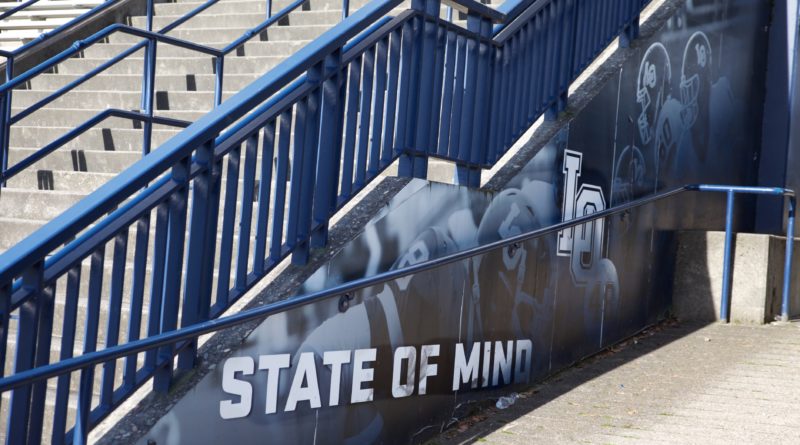 Over the next few weeks, SBLive Oregon will break down every 6A, 5A and 4A football team in the state in anticipation of a six-week season in March and April. Even if the season is postponed or canceled, we will continue to highlight more than a hundred teams and more than a thousand players in Oregon. Here’s our look at the Lake Oswego Lakers of the Class 6A Three Rivers League.

Layne hadn’t played quarterback until the Lakers staff moved him there as a freshman, “and he has just taken off at the position,” Coury said. Last season, he served as the primary backup first for JJ Woodin, then for Filkins when the Lakers went with the Wildcat full-time during the playoffs, getting into seven games and going 9 of 17 for 80 yards. “He’s just learning the game at the quarterback spot,” Coury said. “I think he’s got the chance to play at some level in college. The biggest thing he needs is some experience.”

Lopez served as one of the anchors of the defensive line last season, earning second-team all-league recognition. He has drawn interest from small college programs in the Northwest. “He’s gotten bigger and more physical in the offseason,” Coury said. “We’re expecting a lot from him.”

As a junior, Miller received all-league honorable mention at linebacker, moving to his more natural inside position during the season. He also was in the rotation at running back, rushing for 123 yards and three touchdowns. He broke his foot about two months ago, and his status for a spring season is unknown. “He’s a physical kid, someone who likes to be in the mix,” Coury said.

Layne opened last season as a JV starter, began swinging up to varsity by Week 4, and by Week 7 was firmly entrenched in the rotation in the secondary, earning all-league honorable mention and having a big game in the state final with nine tackles. He could play either safety position or slide into an outside linebacker role depending on need. “He just kept coming on as the year went on,” Coury said. “He’ll end up being an Ivy League-type player or an academy kid.”

McGuire followed a path similar to Dylan Layne’s last season, ending as a starter at defensive end who had big games in the semifinal win over Jesuit (five tackles, 1½ tackles for loss, forced fumble) and the final against Central Catholic (four tackles, forced fumble). He is a top lacrosse player whose older brother, Marshall, plays at Syracuse. “It was huge, his coming on the way he did throughout the year,” Coury said. “He’s a fighter, just a very good player.

Filkins’ primary backup last season managed to get 72 carries for 444 yards and four touchdowns and finished with 11 catches for 76 yards and a score playing as a slot or outside receiver at times. “He’s a very good player who we tried to move around quite a bit to get him the ball,” Coury said.

Mahan plays defensive end for the Lakers out of need, but Coury envisions him moving to outside linebacker at the next level. “He’s a tough, physical kid who can run,” Coury said.

Roach has had to bide his time behind all-state receivers Hutson and Dukart the past two seasons, but Coury praised his work in the offseason to get ready for his big chance. “He’s got good speed and is an athletic kid,” Coury said.

Leykam is the only returning starter on the offensive line and is another player Coury projects could play at the Ivy League or FCS level. “He really understands what we’re doing on offense,” Coury said. “I expect him to be a good, solid player.”

The Lakers rode two-time 6A offensive player of the year Filkins to back-to-back trips to the 6A state final, winning it all in 2018 for the second time in program history before falling to Central Catholic last season.

While Coury thought his team would remain competitive despite graduating nine all-league players, he then lost Jaramillo (moved to Texas to play football) and Williams (focusing on baseball after signing with Santa Clara).

That makes the spring season an opportunity to see who can fill the many holes in preparation for a fall 2021 campaign built around a promising junior class.

“It comes down to how we react when we start playing games,” Coury said. “There will not be a lot of prep time. We’ll have to do a good job moving people around.”

With Filkins now at Stanford after amassing 3,160 yards of total offense and accounting for 42 touchdowns, the offense figures to feature more balance this season.

Jack Layne has played quarterback only two seasons, but with Woodin — who transferred to Lake Oswego in the summer of 2019 and is now at Evergreen in Vancouver — no longer in the picture, Layne has a firm hold on the position. Miller and Olvera are a solid 1-2 punch in the backfield.

“We have a lot of young kids, guys who played as sophomores, and a lot will depend on how well they develop. They’ll be a competitive group, and we’ll have a chance to be in a lot of games and to win games.” — Steve Coury