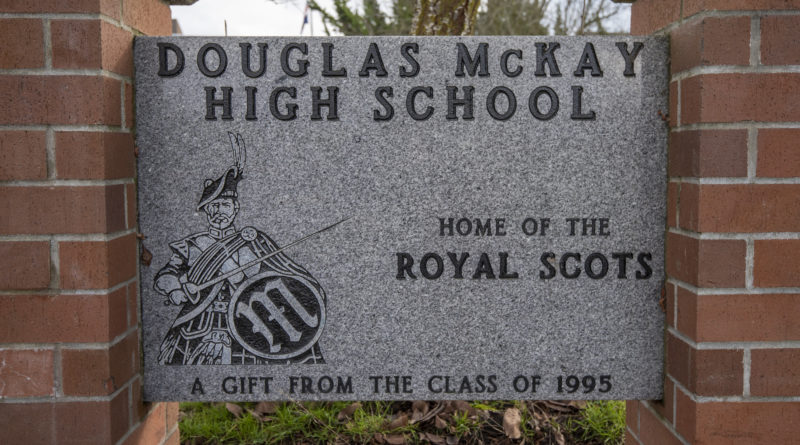 Over the next few weeks, SBLive Oregon will break down every 6A, 5A and 4A football team in the state in anticipation of a six-week season in March and April. Even if the season is postponed or canceled, we will continue to highlight more than a hundred teams and more than a thousand players in Oregon. Here’s our look at the McKay Scots of the Class 5A Northwest Oregon Conference West Division.

Coburn started every game on both sides of the line of scrimmage last season. “He’s only continued to get bigger, stronger and more explosive since last season,” Piper said, “so I fully expect him to have an even more of a breakout year defensively.” Coburn had 11 tackles for loss, 8½ sacks and two forced fumbles last season, when he earned honorable mention on the all-Mid-Willamette Conference all-star team. On offense, the 6-foot-4, 230-pound Coburn has expanded his utility by making progress in the crispness of his pass routes. “He’s getting more comfortable and fluid catching the football,” Piper said. “With his combination of size and athleticism, he figures to be a dangerous weapon for us offensively in the pass game.” Piper called Coburn one of the hardest workers in the program.

Perez made second-team all-Mid-Willamette Conference on defense last season, when he had 8½ tackles for loss and forced four fumbles. “He’s a fantastic, fantastic worker, extremely motivated intrinsically, and he does everything he possibly can to continue to do better,” Piper said, also praising Perez’s leadership. “He holds himself and everyone around him to the highest possible standards and doesn’t let anyone do less than what their best effort is.” Perez brings high energy, physicality and aggressiveness to the field.

The twin brother of Giovanni Perez, Janderi Perez was all-Mid-Willamette honorable mention on defense last season, when he had 7½ tackles for loss and forced three fumbles. Piper said Janderi has essentially the same traits as Giovanni and is among the most effective vocal leaders on the team. “What I’m really impressed with is that he goes out of his way to make sure he supports our freshmen, our sophomores, and works with those younger players in our program to continue to be the best they can be,” Piper said.

Before suffering a season-ending injury before Week 4, Rubio started some at safety and averaged nearly nine yards per carry on offense. This season, he will be in the conversation to start on both sides of the ball. “He is a fantastic athlete,” Piper said. “He’s definitely got a gear, in terms of speed, that not a lot of guys have.” Piper praised Rubio’s work ethic in labeling him as a prime candidate to have a breakthrough season.

After starting at right tackle last season — when the Scots had a left-handed quarterback — the 6-1, 235-pound Solis is on the right side, protecting the quarterback’s blind side. Solis is smart, aggressive and coachable, Piper said. “He’s one of those guys you can put in the game and trust he’s going to do his job — and do it the way he was coached to do it,” Piper added.

Boyzo started early in 2019 at cornerback before a concussion and a broken finger kept him out for much of the season. This season, he will move to safety. Piper called him a smooth, fluid athlete. “He’s able to make things look effortless at times,” Piper said. Boyzo understands all of the team’s coverages, and Piper said his impact on other defensive backs is noticeable as a leader who holds the group together and helps others succeed.

After missing most of last season with an injury, Garibay will be expected to be a key contributor and leader. “He has continued to develop and grow,” Piper said. “He has great size (6-1, 210 pounds) and strength.”

Lee earned all-conference honorable mention as a sophomore. Among his strengths is the ability to make a catch at the apex of a leap. “We look forward to big things from him,” Piper said.

Preparation for the season has differed monumentally from the 2019 season. Piper became the team’s third head coach in less than a year when he was hired on an interim basis in June 2019. That was six months after McKay hired a successor to the coach it didn’t want to return after the 2018 season.

Entering this season, Piper and his staff have had more than a full 12 months to work with their players. That extra time, he said, has paid off in establishing the “core principles and values in our program” and in teaching the X’s and O’s of the system.

“I can’t be more proud of the players and coaches we have in the program,” Piper said, “and the work they’re doing to create something here and to establish something they can be proud of now, and so that five, six years from now, they can look back and say, ‘I was part of that. I helped build that.'”

Despite last season’s 2-7 record — when the wins were by a combined six points and the losses were by an average of more than 27 points — Piper had high hopes for the Scots of Salem were this a traditional season.

“I definitely, wholeheartedly believe we have the talent, if this were a regular year, to be able to compete in every game and have a chance to get into the postseason and make some noise with the players that we have,” he said. “But it’s really bigger than that.”

The second-year coach said the more important challenge is internal: “We need to be better than ourselves every year.”

One spot that looks promising is the defensive line. With Coburn and the Perez brothers, McKay has a proven trio.

The quarterback situation was undecided early this year. Senior James Jennings, the backup last season who started two games when injury sidelined Tyler Kynaston, has made great strides, Piper said. Senior Justyn Byrd is returning to the program after a year’s hiatus.

Given the season ahead, staying healthy, continuing to establish the program’s identity and improving the offense (the Scots scored fewer than seven points in all seven of their losses) seem like reasonable goals.

“One of the things we continue to look at — and this is every year — is, we’re going to continue building our program and creating the conditions and the culture necessary for us to be able to sustain excellence in all phases of what we do — on the field, in the classroom and in our community.” — Brandis Piper