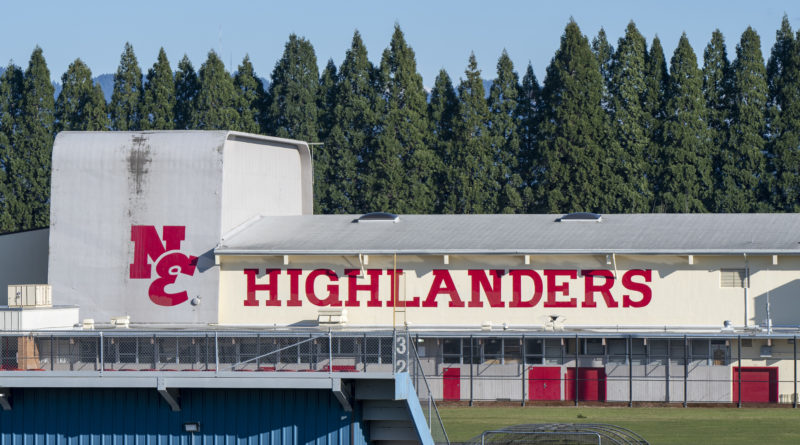 Over the next few weeks, SBLive Oregon will break down every 6A, 5A and 4A football team in the state in anticipation of a six-week season in March and April. Even if the season is postponed or canceled, we will continue to highlight more than a hundred teams and more than a thousand players in Oregon. Here’s our look at the North Eugene Highlanders of the Class 4A Sky Em League.

An all-league honorable mention quarterback as a junior, Proudfit is returning for his senior season … to play running back. With two talented signal-callers in the pipeline and Proudfit already leading the Highlanders in rushing attempts anyway, Raish is making the switch, which Proudfit has embraced. “He took to it and said, ‘Heck yeah, Coach,’” Raish said. Raish keeps his quarterbacks off the field defensively, so the move also lets him unleash Proudfit both ways. “I’m going to move him over to linebacker on defense — he’s just too good,” Raish said.

Johannsen is the more athletic of the candidates to replace Proudfit under center. He’s played organized football for only two years, but being 6-foot-6 makes up for a lot of that. “He’s really exceptional,” Raish said. “He can sling it, he can run. He’s learning the nuances of the position.”

Anderson shined in 7-on-7 competition. He’s less mobile than Johannsen, but he makes up for it with smarts and technique. “(His) IQ’s off the charts in football,” Raish said. “He throws a beautiful football.”

North Eugene is awash with passing targets this season, including Dawson Davis, Jack Lemley, Nate Cook, Michael Warren and others. But Coughran, who led the Highlanders in touchdown catches last season, is the cream of the crop. “He’s just a really good athlete,” Raish said. “He’s got a lot of open ceiling — he’s just tapping into it.”

“He’s got great hands. He’s really instinctual,” Raish said of Plum-Kazmierczak, another of his star receivers. “He’s one of our players who’s going to play at the next level.” At 6-foot-2, he’s currently carrying about 160 pounds but should fill out after he’s able to get back in the weight room. Look for him outside on offense and as North Eugene’s starting free safety.

A transfer from Springfield, Wyers will get some reps at receiver but will truly shine as a starting cornerback. “He’s a lockdown man-to-man guy,” Raish said. “He can hit, he can run, he’s impressive.” ‘Run’ might be an understatement — Wyers turned in an 11.71-second 100-meter dash for Springfield as a freshman.

At 6-foot-4 and 275 pounds, Rankin is a dominant force at the line of scrimmage, with athleticism that translates well to the basketball court in normal winters. Southern Oregon University is recruiting him aggressively, and it’s not just for his physical gifts. “He’s one of our vocal leaders in everything. Always has a smile on his face,” Raish said. “He’d be the kid I’d put on a billboard for North Eugene.” He’ll play left tackle.

Raish talks a lot about “good kids” in his football program, and Ettel, his starting center, is the poster child for what he means. “When I say good kids, it’s not just good football players — it’s exceptional young men, both on and off the field,” the coach explained. “How they are in the community, how they are in school, how they carry themselves is how they play football.” Playing center takes smarts and Ettel’s got ’em — his 4.0 GPA is proof of that — while last season’s all-league honorable mention is a testament to his other football skills.

Things were coming together for the Highlanders in a big way last winter. They were set to drop to Class 4A just as numerous talented young players were ready for their varsity moment. After a lengthy string of losing seasons, North Eugene was going to shine.

Instead of making their Class 4A debut in the fall, the Highlanders participated in Kidsports’ 7-on-7 league with the Class 5A and 6A schools in the Eugene area. North Eugene won the league title.

“What’s so disappointing is that we’re going to be really good this year with our senior and junior class,” Raish said. “We’re really deep and really good, and we hope we get a chance to prove it.”

There’s a promising sophomore class behind them, so the future still appears very bright for the Highlanders. Raish has been talking with recruiters about his players for the first time in years.

“I’ve got some really good receivers, big linemen — it’s fun,” Raish said. “Not only do we have starters, but our second string who are battling for first-string work. We’re two-deep in every position. We’re not, like, an ankle roll away from bringing up a JV kid. It’s pretty exciting.”

North Eugene should be a powerhouse in Class 4A when things get back to normal. But don’t count out the Highlanders this spring, even though they’re scheduled to face established powers such as Sheldon, Thurston and Churchill.

“I’m going to be humble, but I think we’re going to do really well. The schedule we have is not easy, but we’ll be competitive,” Raish said. “I hope they get a chance to show it on the field because they work really hard and they’ve put in the time.”

“We’ll just be excited to do anything. The kids, they’re hungry and ready to go. God bless them — I get so many phone calls and texts, ‘Coach, what are we doing? When’s it happening? When are we going to get together?’” — Rick Raish