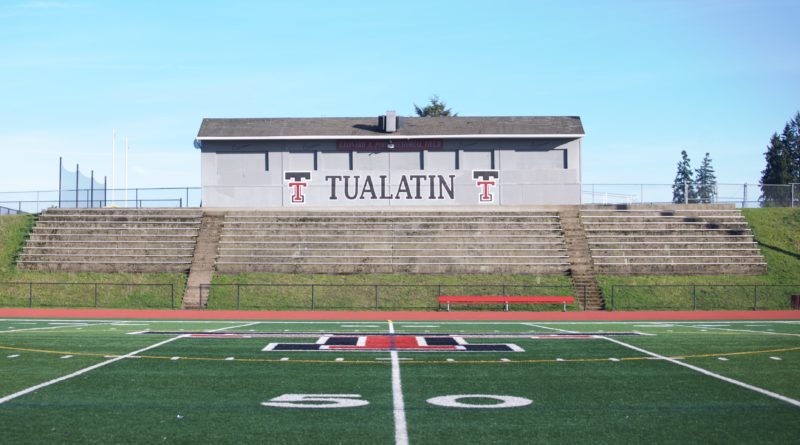 Over the next few weeks, SBLive Oregon will break down every 6A, 5A and 4A football team in the state in anticipation of a six-week season in March and April. Even if the season is postponed or canceled, we will continue to highlight more than a hundred teams and more than a thousand players in Oregon. Here’s our look at the Tualatin Timberwolves of the Class 6A Three Rivers League.

Playoffs: Beat Westview 69-27 in first round; beat North Medford 50-35 in second round; lost 42-28 to Jesuit in quarterfinals

As a junior, Raz earned second-team all-league honors as a prototypical fullback, plowing holes for a lead back (Sayre with 1,279 yards) and taking advantage of the few touches he gets (six catches for 51 yards). “He has sure hands and is a dominant blocker,” Lever said. “He will make a big impact for us this season.”

The Timberwolves found plenty of ways to get the speedy Ross involved in the offense last season with 23 catches for 318 yards and three touchdowns and 15 carries for 149 yards and two scores. He’ll move from receiver to tailback to take over for Sayre. “He has big-play ability. If he gets a seam, he’s gone,” Lever said. “He will carry much of the offensive load for us.”

Lever made sure to work Jones into a series or two in just about every game last season, just as he did with Jackson a year earlier when the Timberwolves had all-leaguer Kyle Dernedde under center. Jones showed his mettle, completing 39 of 75 passes for 685 yards and eight touchdowns with just one interception. “He’s a gunslinger quarterback with the ability to make big-time throws,” Lever said.

An honorable mention all-league selection who’s the only returning starter on the offensive line, he’ll serve as an anchor and a leader for a young group. “Nico has quick feet and a high football IQ,” Lever said.

Belisle, who received all-league honorable mention last season, was one of the team’s most improved players in the offseason, and Lever looked forward to seeing what he would have done in a full season. “Junnie made huge strides and is one of our league’s best interior defensive linemen,” he said.

As a sophomore, Prusia earned all-league honorable mention at cornerback but also received plenty of action at receiver and served as the team’s placekicker early in the season. “He will be a deep threat for us,” Lever said. “He has the speed and size to stretch the field and take the top off of defenses.”

Strahm has all-league potential as an interior lineman. Lever is counting on him to join Belisle in controlling up front and allowing the linebackers room to roam.

Burke played in three games as a sophomore, making five catches. “Peter will make many critical plays for us this season,” Lever said. “He will be a big red-zone target for us.”

With the team’s top four pass-catchers having graduated and Ross moving into the backfield, an opportunity has opened for Alton to receive more playing time this season. “Jake’s speed and savvy will help us on both sides of the football,” Lever said.

Lever believes Edwards has the potential to develop into one of the state’s premier linemen, and with four starting jobs up for grabs this season, he’ll get his opportunity to prove his coach correct.

Clanton is another player who will be stepping into the shoes of a departed star — in this case Miller, who caught a team-high 34 passes (seven touchdowns) last season.

Lever lists Biggs as an athlete on the roster, and while Biggs’ primary positions are in the backfield and the secondary, expect him to line up all over the field to take advantage of his versatility and athleticism. “He will make plays somewhere for us,” Lever said. “Hold your breath when he has the ball. He’s a lightning-in-a-phone-booth type player.”

Wagner will push Jones in practice and, like Jones last season, perhaps get a series or two under center in games. He’ll also receive some playing time at other positions. “He has the skill set to play any skill position,” Lever said. “We will use his athletic ability somewhere if he does not start at quarterback.”

The Timberwolves reached the state quarterfinals last season — their first appearance since their run to the 2010 final — with a senior-laden squad that featured seven players who earned first-team all-league honors.

This season will be one of transition from that group to a large, talented cadre of juniors, the first wave of whom — Ross, Jones, Webb and Prusia prominent among them — blended into last season’s team and now are serving as the foundation this season.

They’ll have a few seniors in key roles, including Raz serving as a battering ram at fullback and Strahm and Belisle anchoring the middle of the defensive line.

In a typical season, playing in the ever-difficult Three Rivers League would have made for a rough transition, but Tualatin likely still would have finished as a top-16 seed and earned at least one home playoff game.

Now, with an abbreviated spring season, Lever and his staff “will be focused on the development of our players holistically” and preparing them for another shot at a deep playoff run in the fall fully reloaded.

“We are going to cherish our time together and be thankful for the opportunity to play. Our focus has always been creating great young people who will be successful in any endeavor that they choose. A pandemic or apocalypse will never change that part of our program.” — Dan Lever