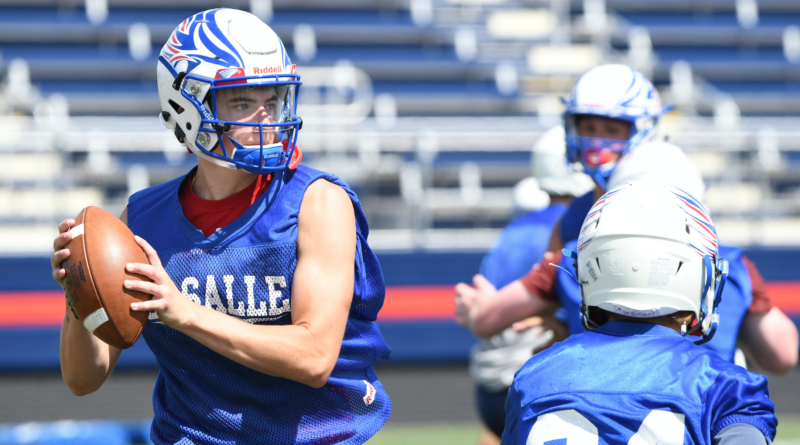 Over the next few weeks, SBLive Oregon will break down every 6A, 5A and 4A football team in the state in anticipation of a six-week season in March and April. Even if the season is postponed or canceled, we will continue to highlight more than a hundred teams and more than a thousand players in Oregon. Here’s our look at the La Salle Prep Falcons of the Class 5A Northwest Oregon Conference East Division.

Playoffs: Lost 55-7 to Silverton in first round

First-team all-Northwest Oregon Conference East Division as a junior, the 6-foot-2, 190-pound Rosumny was third on the Class 5A regular-season state leaderboard in passing yards (1,858), throwing 20 touchdowns and completing 65 percent of his passes. “We’re going to put a lot on his plate,” Hazel said. More than statistics, Hazel stressed Rosumny’s intangibles. “He is one of the two best leaders I’ve had the privilege to coach,” Hazel said. “It’s how he carries himself on and off the field. He has a way of getting his peers to follow him. He has a way of taking them places they didn’t think they could get.” Rosumny has been accepted to Pomona College in Claremont, Calif., which has a 7 percent acceptance rate.

A third-year starter, Menor was first-team all-NWOC East at running back and kick returner last season. The dynamic senior led the Falcons of Milwaukie with 441 rushing yards (6.5 yards per carry) and four rushing touchdowns. “I think he’s one of the best football players in our league,” Hazel said. “He’s going to play running back, he’s going to play some slot, play a little H-back. We’re going to do a lot of different things with him and find ways to get the ball in his hands.” On defense, Menor is targeted for cornerback or strong safety, with Hazel saying, “He’s going to go where we need him the most.”

Peterson is coming off a strong sophomore season in which he was first-team all-NWOC East at wide receiver and second-team at safety. He finished the regular season second in Class 5A in receiving yards with 763 (19.6 yards per catch) and sixth in receptions (39, including nine for touchdowns). “He’s a very good route runner, very good with his hands,” Hazel said. “He has a real knack for creating separation between himself and DBs. He’s right with James (Menor) as one of the best football players in the league.” On defense, “He’s going to go where the opponent likes to attack the field the most,” Hazel said.

“He’s played every meaningful down of defense since his freshman year,” Hazel said about Crowley, a first-team linebacker on the all-NWOC East team last season. “How he goes is how our defense is going to go.” Crowley is projected to get considerably more carries at running back this season than he had as a sophomore. “With him and James, we have two guys we feel need to be on the field at all times,” Hazel said. “He can run routes, catch the ball out of the backfield, can line up in the slot.”

One of the keys to ensuring that Rosumny, Menor and others can operate will be Griffiths, a returning starter on both interior lines. “He’s the leader of that group up front,” Hazel said. Griffiths was on the all-NWOC East second team as a defensive lineman as a junior.

Winant will be expected to make the transition from junior varsity and play a large role on the lines. “He’s taken a big leadership role with the offensive line group,” Hazel said.

Drenner was second-team all-NWOC East at offensive tackle last season. Though not terribly imposing at 6-foot-2 and 185 pounds, he also makes an impact as a defensive end. “He’s a great pass rusher,” Hazel said. “His quickness is unbelievable. His athleticism is unbelievable.” Drenner also is notable for a high-RPM style of play. “He’ll out-effort you every time,” Hazel said.

By size alone, the 6-foot-3, 215-pound Tarbet is a player to watch as a sophomore. He started on defense from the outset as a freshman defensive end. This season, his offensive role will expand, and he could play tight end as well as receiver. “He has a chance to be a big-time player,” Hazel said. “He’s got a bright future.”

The team leader in interceptions last season, Curran was second-team all-NWOC East. At 6-foot-3 and 180 pounds, he can cover a lot of ground and match up with big and tall receivers. “He definitely came on, had some big plays last year for us in some games that sealed games or gave us some momentum,” Hazel said. This season, the plan is to have Curran assigned to an opponent’s top receiving threat. “We feel confident in that matchup,” Hazel said.

Led by Rosumny, La Salle Prep looks as if it’s ready to hit a high gear on offense. The Falcons under Hazel have been a spread/shotgun team, but things look to reach another level this season.

“Everything is tailored to the quarterback and what that person does well,” Hazel said. “He does so much well that we’re really able to expand the playbook and expand the passing game. We have weapons on the outside.”

The Falcons gave up 40 points in five of their games last season, so there’s room for growth on that side of the line of scrimmage. Led by Crowley, four players who were all-NWOC East on defense return. It’s logical to expect improvement from that unit.

More than anything, it seems safe to predict that the Falcons will be in some entertaining games while they try to show they are among the top teams in their area.

“I expect us to get in some shootouts and have a lot of fun and put a lot of points on the board,” Hazel said. “We feel pretty confident that on the defensive side, you’re going to have to pick your poison a little bit, because we can throw it around and we can run the ball.”

“We as coaches feel very fortunate that this is the group that all of this happened to. Because of their leadership across the board, some of the kids that we have, they were able to weather the storm better than any other group that I’ve had (would have). With their personality, they’re able to take events as they come and respond appropriately to get the outcomes they want.” — Aaron Hazel