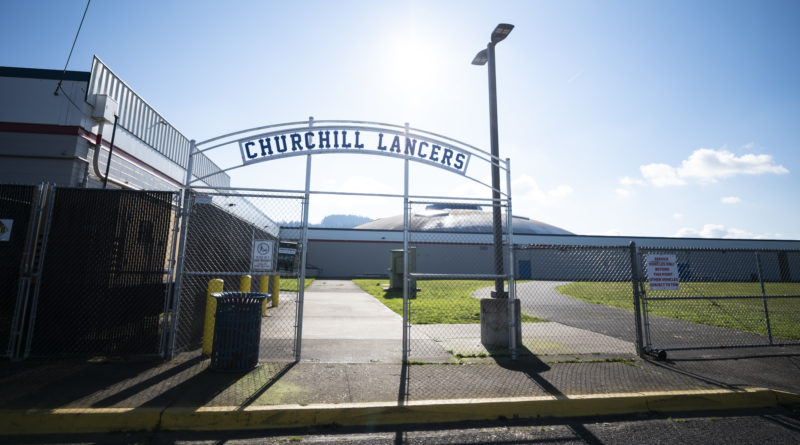 Over the next few weeks, SBLive Oregon will break down every 6A, 5A and 4A football team in the state in anticipation of a six-week season in March and April. Even if the season is postponed or canceled, we will continue to highlight more than a hundred teams and more than a thousand players in Oregon. Here’s our look at the Churchill Lancers of the Class 5A Midwestern League.

At 6-foot-1 and a solid 275 pounds, Thomas is a formidable presence at center or offensive guard. “He’s really hard to beat in the trenches because he’s strong,” Robinson said. His status as an all-league honorable mention as a sophomore backs that up, and his best is yet to come. “He’s a really good football player,” Robinson said.

The younger brother of Churchill alum and Portland State starting lineman Richard Estrella, Bryson brings the athleticism of a star baseball player to the defensive line, along with a 6-foot-3, 270-pound frame. His duties on the diamond, however, might limit his time on the gridiron this year — under the OSAA’s current schedule, the beginning of baseball practice will overlap with the end of football season. “He’d love to play football and be there for his team, but he probably has a college baseball future,” Robinson said. “If we would have played in the fall, he would have had a great season.”

The 6-foot-2, 240-pound Rohde is among the many juniors who were thrust into starting roles as sophomores last season after the departure of Churchill’s massive 2019 graduating class. They took their lumps, learned from it and are back for more. “He was a guy that had an eye-opening experience, because he didn’t play that much as a freshman,” Robinson said. “(He’s) way more consistent and reliable now, as a junior.” Robinson believes Rohde can be a top-three player in the league at defensive tackle or end and a burly physical presence at fullback.

Coddington is playing football for the first time and already impressing — his fall 7-on-7 performance got the attention of Western Oregon and Southern Oregon, among other local colleges. At 6-foot-2 and 190 pounds, he has the prototypical build and athleticism of a high-end wide receiver, defensive back or pass-catching tight end, all of which he’ll likely play. “I hope I can see what he can do with pads on before he goes to college; I think that would be good for him,” Robinson said. “He can play it all. He’s very versatile.”

Churchill has seen a parade of impressive receivers come through the program in recent years, and Van Camp is next in the lineage. “Wide receivers are probably Churchill’s bread and butter. I don’t know what it is,” Robinson said. Van Camp shared the formative experience of being thrust onto the varsity stage last season. “He’s much more dedicated to his craft now,” Robinson said. “He’s one of the most talented kids in our league.”

Roberts scored 30 touchdowns for the junior varsity team as a freshman. “Now he’s ready for his varsity moment,” Robinson said. A running back and safety, Roberts has potentially the highest recruiting ceiling in the Lancers’ program and will play nearly every down this season at those positions and others. “He might be our most explosive player,” Robinson said.

Peck’s family was displaced by wildfires in the fall. Despite the challenging offseason, he has worked extensively on his speed and agility to complement his bowling-ball power between the tackles. “His legs are just tree trunks,” Robinson said. The Lancers have had a 1,000-yard rusher every season of Robinson’s tenure, and while the pandemic-shortened season might not provide enough time to amass that kind of number, Peck should have an enormous impact in the ground game.

Respect is not a word Robinson tosses around lightly, so it’s no small compliment when the coach says of this junior, “Kids respect him. Coaches do, too.” Bowles has earned it. A capable inside linebacker, Bowles stands 5-foot-10 and weighs 230 pounds and stepped up to play offensive line when the team needed help on that unit. “Dylan’s a guy that cares about the team,” Robinson said. “He’s a guy that wants to play inside linebacker, but he’s too talented to sit on the sidelines on offense.”

With the graduation of all-league quarterback Dylan Carson, Churchill’s hunt for a new signal-caller focuses on these two. Pence has been around the program as a JV quarterback and varsity backup and has steadily improved over the past two years. “He knows our system and knows our players,” Robinson said. “He does a good job of distributing the ball.” Stiegeler is a transfer from Sheldon who impressed during fall 7-on-7 with both his power and finesse, though Robinson wants to see how his physical tools play with pads on. “7-on-7 has been a good indicator, but it’s easy to throw in shirt and shorts,” Robinson said.

The Lancers graduated 30 players before last season, so it’s not a big surprise that results took a drop as an inexperienced group featuring numerous sophomores stepped not only up to varsity, but into starting jobs in a campaign that included nonleague contests against Thurston and Wilsonville.

“It took us a while to get our footing. We started out 0-5, we took some losses to really good teams,” Robinson said. “The kids battled, and we ended up winning three of our last four. The kids really came together and turned it around.”

No one likes losing football games, but Robinson saw the value in that experience for this season’s juniors.

“It’s not their fault. They thought you just wear Churchill on your chest and you’re going to be good. That’s not necessarily how that works,” he explained. “It’s nice for them to have that experience and be humbled a little bit. They have a choice in that moment: They can either work to try to get better or accept where they are. As a group, they buckled down.”

Robinson thinks that experience would have paid off in the fall of 2020.

“This team would have won. This team would have been a highly competitive team that would have gone to the playoffs. They would have competed for a league title,” the coach predicted. “A lot of unproven players, but before COVID, there was a lot of energy and a real positive spark that was going on at our school.”

This spring, with no playoffs to shoot for, the Lancers’ first priority will be giving the senior class a fond farewell.

“The first is to honor the seniors. The 2021 class, the current seniors, I think COVID affected them the most out of anything. They got a raw deal,” Robinson said. “I want the community to come together and let the seniors know they are valued and that we care about them and they are a big part of our community.”

But the juniors have another season to build toward, and Robinson thinks it could be quite a good one in the fall. Despite the experience gained in 2019, a team doesn’t grow into a playoff-caliber club without time on the field.

“We have hundreds and hundreds of missed football development hours,” Robinson said. “We need to get back to playing the sport of football. We haven’t done that in almost two years.”

“If we can get back to some normalcy, we’ve got some really good stuff going on at Churchill.” — AJ Robinson