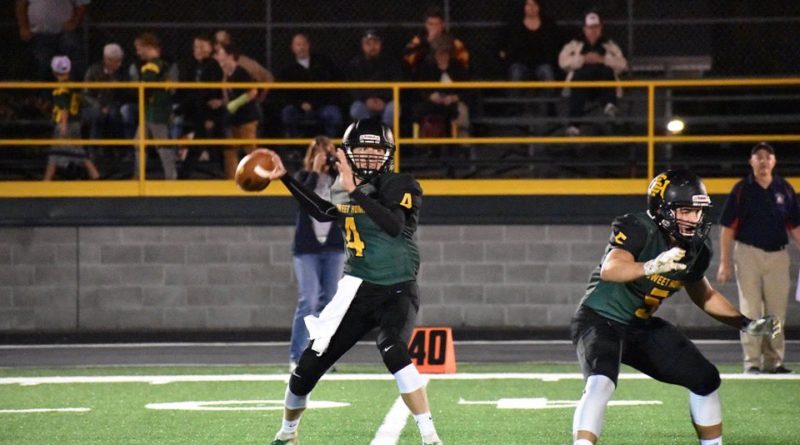 This month, SBLive Oregon is previewing every Class 6A, 5A and 4A high school football team in the state leading up to the six-week season in March and April.

Today, we examine the quarterback situation for each of the 35 Class 4A teams. Who are the starting quarterbacks? Who are the backups expected to push the starters for playing time?

Note that the information provided here reflects where things stood as camps opened. Be sure to follow SBLive Oregon throughout the season for the latest on what’s happening with each team!

Senior Bo Williams is a third-year starter at quarterback. “He has really grown in understanding the concepts of our system, whether in the passing tree or in our run-pass option scheme,” coach Howard Rub said. “We think he has a chance to have a great senior season.”

Junior Cooper Gobel was moved to quarterback last season, and he received plenty of repetitions at the junior varsity level. Gobel has rewarded the coaching staff for the faith it showed in making the positional switch. “He can sling the ball,” coach Cole Linehan said. “He’s done great in the offseason with the little time we’ve had to work with him.”

Sophomore Kaden Harris takes the wheel of the Mustangs’ offense, a year after he could have been a varsity player. The coaching staff did not want to take any chances with him, however, and wanted his freshman season to be a springboard to a successful varsity career. “He’s going to be the catalyst that turns this program around,” coach Colin Schaeffer said.

The Seagulls’ offense will be in the hands of junior Carson Kawasoe, who has the physical talent and leadership so crucial to the position. “He’s always been able to spin it,” coach Aaron Tanabe said. “The kid has a natural arm talent.”

Senior Beck Blau, who formerly played wide receiver and running back and also kicks, is the projected starter for the Valiants of Beaverton. Blau will look to fill the void created by the departure of three-year starter Daniel Pruitt. “Sometimes when you don’t have a quarterback,” coach Nick Hegwood said, “the best thing you can do is put your best athlete out there and see what happens.”

Senior Hogan Smith takes over as starting quarterback. Last season, the Cowboys of Prineville didn’t want to squander Smith’s ability, so he played wide receiver and cornerback instead of backing up at quarterback. “He’s an extremely smart person,” coach Ryan Cochran said. “He understands the concepts. He understands reading the defense.”

Isaiah Schaffer took over as the starting quarterback as a junior during the 2019 season. “We want our best athlete with the ball in his hands,” coach Andy Mott said. Schaffer’s running ability brings a potent dimension to the Rangers’ offense.

Three players were competing for the White Buffaloes’ starting quarterback position, and each brings a different strength to bear. Junior Reece White (possibly the leading candidate) is 6-feet-5 and a standout wrestler and boasts a strong arm. Sophomore Dru Boyle is among the school’s best athletes, and coach Kurt Taylor said he is “the smartest football kid we’ve had in our program in a long, long time.” Junior Ethan Graeme has a gunslinger mentality and an arm to back it up.

Junior Isaac Thomas-Klementis and sophomore Tucker Ward were competing for the starting quarterback job early in the year. Thomas-Klementis has a prototypical quarterback’s body and a strong arm, but he could end up at running back — a testament to his ability with his legs. Coach Sean McElhaney said the team has all the confidence in Ward if he ends up as the starter. “Both are really good athletes,” McElhaney said. “Both throw really good balls. And both are really smart.”

Kaden Anderson takes over at quarterback after he played wide receiver as a junior in 2019. The transition has been on an upward trajectory. “No doubt in my mind he’ll live up to the expectations of what we’re trying to build here at North Marion,” first-year coach Grant Carmichael said.

Junior Jacob Hage has been the starting quarterback since Week 4 of his freshman year, when the coaches realized he needed to be on varsity. An athletic runner, Hage has been given progressively more opportunity to pass. As a junior, his job is to become a threat passing and running.

Sophomore Markus Everitt returns at quarterback after starting about half of the Cubs’ games as a freshman. Everitt is learning a new offense installed by first-year coach Dan Schaffeld, who said the sophomore is picking things up quickly.

Eli Brown has an edge over fellow sophomore Cody Leming in the race to start at quarterback for the Eagles. Last season, Brown backed up Ben Rash, who was voted Oregon West Conference offensive player of the year his senior season. Leming did not play football last season.

Senior Aiden Tyler returns as the Huskies’ starting quarterback. “He’s done everything he can in the offseason to perfect his craft,” coach Dustin Nichol said. Tyler signed a letter of intent with Division II Western Oregon.

Senior Jordan Blem returns at quarterback. Coaches have asked more of Blem since last season, and he’s been equal to the challenge.

First-year coach Joe Polamalu saw his players on the field for the first time in mid-January. Among the biggest questions facing the team is who will play quarterback, and Polamalu didn’t identify any candidates early in the calendar year.

The 6-foot-5, 215-pound Cobyn Herbert will start at quarterback for the Falcons. He will operate a new offense as Elmira switches from a spread look to an I-formation.

Senior Joey Laing was the varsity backup the past two seasons and now has first crack at succeeding Max Campbell, a 2019 Sky-Em League co-offensive player of the year. If Laing can overcome the tendency to try to do too much, coach Frank Geske said, he could be very successful. Junior Carter Greene, who led the Eugene school’s JV team to an 8-1 record last season, will push for the starting role as well. “He can pretty much do everything,” Geske said. “He just hasn’t been given the opportunity yet.”

Quarterback Dominic Montiel returns as the starter for the Pirates of Coos Bay. Montiel earned all-Sky-Em League honorable mention as a sophomore. “He’s more mature, and I think he’s gotten a little faster,” coach John Lemmons said. “Maturity-wise, there’s a big difference between a sophomore and a junior.”

Junior Cade Johannsen and senior A.J. Anderson are the candidates to start at quarterback for the Highlanders. The incumbent starter, senior Jason Proudfit, moved to running back — a fitting transition given he led the team in carries anyway. Johannsen is the more athletic of the two candidates. His experience in organized football is all of two years, but being 6-foot-6 makes up for a lot of that. Anderson stood out in 7-on-7 competition. He’s less mobile than Johannsen, but he makes up for it with smarts and technique.

Senior Tim Orr took over the starting quarterback job as a junior and was second-team all-Skyline Conference after going 90 of 183 for 1,385 yards and 18 touchdowns (six interceptions). He holds offers from Willamette and several West Coast junior colleges.

Junior Nate Vidlak — and not older brother Sam — will be the starting quarterback for the Mustangs of Grants Pass. Sam Vidlak, a 2019 Oregon Class 3A co-offensive player of the year, graduated early and enrolled at Oregon State. Nate Vidlak was second-team all-conference at wide receiver last season, when the Mustangs advanced to the OSAA Class 3A championship game.

Junior Silas Dutra and senior Kaden Coulter will compete for the starting quarterback job. Both excelled in a fall 7-on-7 league. “Silas is a better runner, while Kaden has a little better knack of picking receivers out in routes,” coach Tom Smith said.

Tristan Lee is back at the controls after he was voted Skyline Conference offensive player of the year as a junior. The 6-foot-3, 205-pound Lee directed the Vikings of Klamath Falls to a sixth consecutive conference title, running for 768 yards and 11 touchdowns in Mazama’s triple-option veer offense. “Tristan is one of the best quarterbacks I have had to run our offense,” eighth-year coach Vic Lease said. “He makes us go.”

Junior Jaydon Twedell is the undisputed starter at quarterback for the Knights of Grants Pass. The 6-foot-3 Twedell was expected to battle for the No. 1 spot with fellow junior Dylan Neufeld, who earned all-Skyline Conference honorable mention after he took over for injured Drew Hansen midway through the 2019 season. Neufeld moved out of the district over the summer, leaving Twedell — who had a strong JV season and threw a touchdown pass in the OSAA playoff loss to Gladstone — the clear-cut No. 1.

Seniors Justin Wilcox and Eli Page will compete for the Pirates’ starting quarterback job. They’re in a fight to succeed Zach Dungey, who started the previous two years. At 6 feet and 185 pounds, Wilcox has a more prototypical quarterback frame compared with that of Page (5-8, 150 pounds).

Seniors Kaden Myer and Gabe Gambleton are competing for the Bulldogs’ starting quarterback spot. Myer was the primary varsity backup quarterback last season and posted modest statistics. Gambleton played most of 2019 with a broken wrist, which hampered his offensive contributions at wide receiver. “Both Kaden and Gabe are capable dual-threat athletes,” coach Jason Ramos said. “They have both played the position … and I am excited to have their type of athleticism at quarterback.”

Jaden Tiller returns at quarterback after being voted Class 3A District 3 offensive player of the year and honorable mention all-state as a sophomore. Tiller excelled in the read option and run-pass options in the Hilanders’ offense, amassing 1,146 yards passing and 912 rushing.

Senior Payton Cooper is moving under center after being a second-team all-Greater Oregon League selection at running back last season. He will succeed Parker Robinson, who passed for 1,466 yards and 25 touchdowns and rushed for 795 yards and six scores in the Tigers’ OSAA championship season of 2019. Cooper played quarterback in middle school and was the JV quarterback as an underclassman.

Juniors Nick Herndon and Zach Setzer were competing for the starting quarterback position early in the calendar year for the Pioneers of Milton-Freewater. Herndon played wide receiver and started at safety last season before getting hurt. Setzer played quarterback in middle school but didn’t play football in either of his underclassman years. “They’re both athletic, but we haven’t been able to hit the field yet,” first-year coach Jorge Estrada said. “They’ve never run my offense, don’t know how to make the reads yet. We’ll just have to hit the field and see what happens.”

Junior Landon McDowall has been the Bulldogs’ starter since Week 7 of his freshman season and was honorable mention all-district last season. This year, though, he’ll face stiff competition from sophomore Andrew Enders. McDowall has the advantage of having started 13 games, including three in the postseason. Enders has been groomed to become the Bulldogs’ starting quarterback since junior high and over the past year has attended quarterback clinics and combines around the country, traveling to Arizona, Georgia and North Carolina to hone his craft.

Junior Ruben Hernandez is a “likely candidate” to be the Tigers’ starting quarterback. Coach Greg Simmons called the 5-foot-8, 160-pound Hernandez one of the best athletes in the program. “He’s experienced, smart, athletic, tough as nails,” Simmons said. “He fits what we want at that position.”

Junior Tanner Steele is projected to take over as the starting quarterback and succeed two-year starter Colton Kesey. Steele saw closing-time action in four games as a sophomore. “He will get better with each rep he gets and is also a running threat,” coach Jeff Aldred said.

Read our complete breakdowns of every 6A, 5A and 4A team here