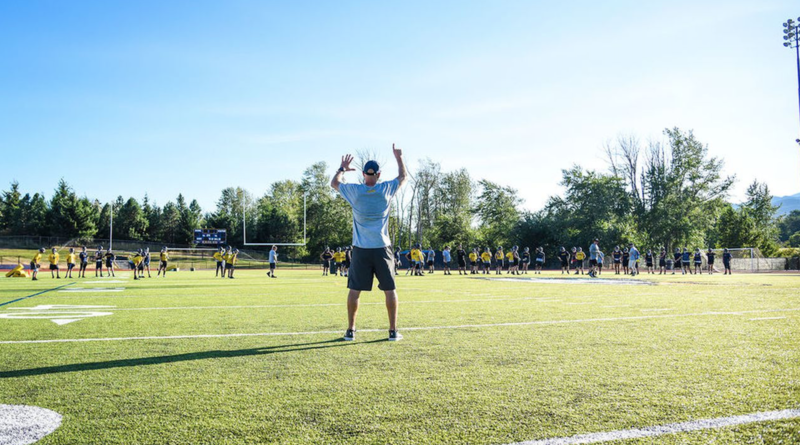 Over the next few weeks, SBLive Oregon will break down every 6A, 5A and 4A football team in the state in anticipation of a six-week season in March and April. Even if the season is postponed or canceled, we will continue to highlight more than a hundred teams and more than a thousand players in Oregon. Here’s our look at the Hood River Valley Eagles of the Class 5A Northwest Oregon Conference East Division.

The 6-foot-2, 285-pound Buckles, ranked as the No. 7 recruit in Oregon’s class of 2021 by 247Sports, signed with Oregon State in December’s early signing period. “He does a really good job of getting his hands on guys and then getting them on the ground,” Sperry said. Buckles was first-team all-Northwest Oregon Conference East Division at offensive tackle and voted co-lineman of the year as a junior. On defense, he was a second-team all-NWOC East choice. Buckles earned honorable mention on the offensive line on The Oregonian/OregonLive Class 5A all-state team in 2019. “He’s pretty relentless,” Sperry said. “He’s got good feet, good strength, good power.” A fourth-year starter at left tackle, Buckles is a team captain with plenty of athleticism: He won the Class 5A state title in the shot put as a sophomore.

Another team captain, Castaneda is a third-year starter who was first-team all-NWOC East on the defensive line and second-team at guard last season. “He’s a big, strong kid who is kind of maturing late but is really physical and has a relentless motor,” Sperry said. “He gets after it. He likes to mix it up in the trenches and be a tough guy.” Sperry foresees the 6-foot-1, 255-pound Castaneda playing in college.

As a junior, Fletcher was first-team all-NWOC East at running back and linebacker. The 5-9, 190-pound Fletcher gained more than 1,300 yards on the ground and had five games with at least two rushing touchdowns in 2019. Through the seventh week of the season, Fletcher was Class 5A’s leading rusher — despite missing two weeks. “He has a low center of gravity, and he’s a guy who’s not going to go down with an arm tackle,” said Sperry, who called Fletcher’s toughness and physicality his strongest traits.

The Eagles’ top receiver last season, Hughes had 31 receptions for 607 yards and nine touchdowns. He earned first-team all-NWOC East recognition at receiver and second-team recognition as a kick returner. Hughes has been a starter for Hood River Valley in the defensive secondary since his freshman season. Sperry called him explosive and fast and said he combines that athleticism with good hands and a love of football.

Foster is a returning starter at center whose experience will be key on both sides of the ball. Like Castaneda, the 6-foot, 255-pound Foster is maturing a little late, Sperry said. “This will be a great season for him to show the maturation he’s gone through as a football player, his strength and his knowledge of the game,” Foster said.

A returning starter, Wells was among the Eagles’ leading tacklers last season. This season, he is a team captain. “His experience and leadership will be huge,” Sperry said. Wells was a slot receiver and strong safety in 2019 as well as being the Eagles’ backup quarterback. Sperry called him a jack-of-all-trades. “He’s one of the unsung heroes on the field,” Sperry said.

If control of the line of scrimmage is the key to the game, Hood River Valley looks to be in a good spot. Led by the Oregon State-bound Buckles, the Eagles have proven performers in important positions on the front lines.

At receiver, also, Hood River Valley could be the envy of other Northwest Oregon Conference East Division teams. In 2019, Hughes tied for the NWOC East lead in the regular season in touchdown catches with nine — including two in the Eagles’ game against East co-champion Pendleton.

Fletcher returns to lead the rushing game. He was the East Division’s leader in rushing yards and rushing touchdowns last season. With Buckles at the forefront, the line should be able to help Fletcher have another productive season.

Last season, the Eagles were in an NWOC interdivisional game against Hillsboro to determine a spot in the Class 5A playoffs. Four of Hood River Valley’s five trips inside the Hillsboro 20-yard line came up empty, and the Eagles lost 34-6. That was by far their lowest point total of the season; they averaged more than 41 points in their other seven games. Even though Hood River Valley finished 15th in the final OSAA rankings, the Eagles weren’t in the 16-team Class 5A playoff field.

One position that was up for grabs early in the year is quarterback. The Eagles lost Ryan Gray, second-team all-NWOC East last season after he passed for more than 1,100 yards and 17 touchdowns, including three against Pendleton.

“We have three guys who I’m thinking about seeing who fits there the best for us,” Sperry said.

Wells, last season’s backup, is a candidate, as is sophomore Michael Frost. Sperry said Hughes might also play some at quarterback.

“We will need time to see how it plays out,” Sperry said.

In fact, the overall development and maturation of unproven younger players is an important area for Hood River Valley.

“The biggest area will be players who move up to varsity spots maturing into varsity players and contributors,” Sperry said. “They will. That is how high school sports go.”

“We have experience at positions to make us very physical and dynamic. We will expect to be competitive and win.” — Caleb Sperry