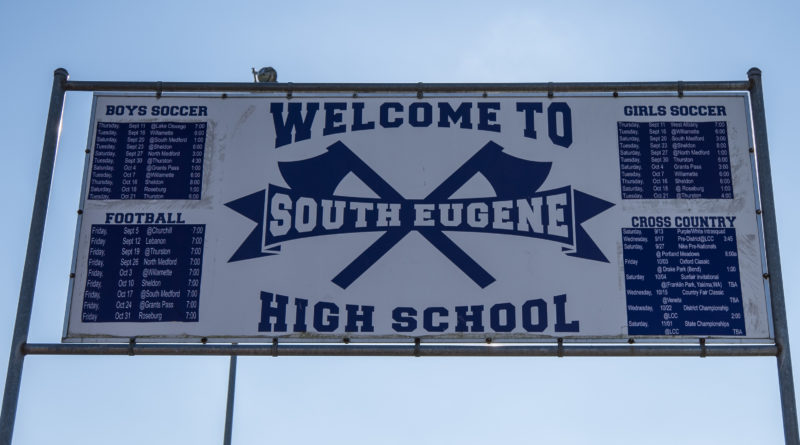 Over the next few weeks, SBLive Oregon will break down every 6A, 5A and 4A football team in the state in anticipation of a six-week season in March and April. Even if the season is postponed or canceled, we will continue to highlight more than a hundred teams and more than a thousand players in Oregon. Here’s our look at the South Eugene Axe of the Class 5A Midwestern League.

Trone went from relatively unheralded receiver to all-league first-teamer in 2019. How’d he do it? Simple: He’s very, very fast. “Jake is one of the fastest and most explosive players in the valley,” Koberstein said. Trone will be the centerpiece of the Axe’s offense in his final high school campaign. He’ll also continue to play defensive back, where he earned second-team all-league honors last season.

A smaller defensive back, Ross garnered all-league honorable mention as a junior by being “a coach’s dream,” according to Koberstein. “He’s small in stature but big in heart and work ethic,” the coach said. “Jesse had a really strong year at corner for us last year and we’re excited for him to contribute even more on offense this fall.”

With Bryce Boettcher’s graduation, one of these two players will take over as South Eugene’s signal-caller. Robertson was Boettcher’s backup last season and played linebacker for the varsity squad. Saunders is a dynamic athlete and playmaker. “We haven’t been able to work with them as much as in a normal season, but we are excited about the potential we have there,” Koberstein said.

Thompson will step into a big role as one of the Axe’s cornerstones up front. “(He) brings some athleticism in a long frame,” Koberstein said. Look for Thompson to be a major factor in the trenches on both sides of the ball.

Another lineman, Frye will be a major contributor on offense. Koberstein said Frye has “next-level size” at 6-foot-3 and 300 pounds and has put in work during the pandemic to maximize his physical gifts. “He’s raw,” Koberstein said, “but he’s going to be a big piece for us.”

The move down to Class 5A has been good for South Eugene. In posting consecutive winning seasons for the first time in recent memory, the Axe have established a positive reputation for the program. Each of the past two seasons, they’ve just missed returning to the playoffs for the first time since 2016.

For rebuilding programs, momentum is essential. Winning breeds excitement, which boosts numbers, which puts more talent on the field.

Sure, the Midwestern League is tougher than ever, but South Eugene is now part of the reason that’s the case. So, how would a 2020 fall season have gone for the Axe?

“It’s so hard to know,” Koberstein said. “We were barely into offseason workouts when school closed.”

While Koberstein’s stated goal for the spring season is “to provide a positive, safe and healthy experience for kids,” there’s also plenty of opportunity for growth for a team that leans heavily on its junior class and has a fall 2021 season to build toward.

They won’t play their typical league schedule, but the local scheduling will allow them to take on some of the toughest opposition the league has to offer — and more, if they add some Class 6A teams to the slate. While they won’t make the playoffs this spring (with no playoffs to make), the experience they gain could provide just the boost the Axe need to make the playoffs in the fall.

“We gave ourselves a chance to land a playoff spot but came up short (last season). In the end, we were proud of the effort our young people gave and the season we had.” — Kenny Koberstein