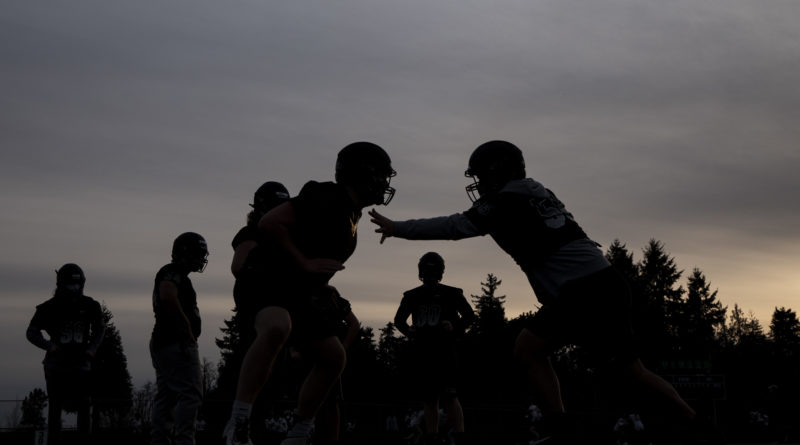 When Gov. Kate Brown announced revised statewide guidelines last week that allowed for a high school football season, many rejoiced at the news.

Lost amid the excitement, however, was the fact that school districts in Extreme and High Risk counties had to opt into the season by adopting heightened testing protocols and implementing at minimum Limited In-Person Instruction (LIDI) at their schools.

While most school districts in Extreme and High Risk counties have opted in and either started LIDI or are in the process of implementing it, several districts have chosen not to do so.

The Gresham-Barlow School District announced Thursday that it would not opt in. Barlow principal Bruce Schmidt and athletic director Dan Dalzell wrote in a letter to parents that “it became evident that these requirements have proven very difficult to meet in order to safely play full contact football in Season 2.”

Instead, the two schools will offer 7-on-7 football and Lineman Challenges, which the OSAA Executive Board approved this month as alternatives for schools that choose not to participate in a tackle football season.

Barlow coach Chris Koenig, who was hired in January following the resignation of David Kilpatrick-White, said the team is still processing the news.

“Our entire football staff, as well as the community at large, are devastated for our kids,” Koenig said. “Our school district allowed in-person workouts to begin back in December. These athletes have met every requirement and training protocol asked of them. The number of kids participating grew each week. We will need to reassess the situation next week. Only then will we have an accurate count of athletes who are willing to continue participating.”

Several other East County districts, including Centennial, David Douglas and Parkrose, also have chosen not to play tackle football this spring.

“It mostly affected the morale for the seniors,” Parkrose coach Brian Jackson said. “Of course, everyone was indeed disappointed, but that does not mean that we will not keep going forward with the objective of building the program. We will prepare for the next football season as if this were spring football training.”

Parkrose senior Ty Delgado, one of the top offensive linemen in the region, expressed the highs and lows that many players have felt this season on his Twitter feed.

On Feb. 11, following the governor’s announcement, he posted, “Man I put my all into this game. We’ve been needing this!! Being out there is affecting mine and my teammates’ lives for the better. If we can compete safely, I’m making my last ride count. #MaskUp.”

On Friday, following word that Parkrose would opt out of tackle football, he wrote, “I was just informed my last HS game was as a Junior last November. Although I’m saddened I’ll never have a senior night or play my senior season, I’m grateful to be alive and well. My heart goes out to all seniors out there who aren’t playing. Keep moving. I’m not done yet.”

David Douglas coach Cal Szueber felt not only disappointment that the Scots will not be playing tackle football but frustration, calling this decision another example of the state’s equity gap between rich and poor schools.

“I believe the entire state should be the same, either all in, or all out,” Szueber said. “It’s not fair to the kids based on where they live or what type of education they are receiving. I believe the state has an equity issue, and it is getting worse by decisions like this. This is why we have one state governing body, the OSAA, to provide equitable opportunities to all student-athletes.

“With that said, we are going to embrace the situation and approach this the same way we would if we were playing tackle football. I think we also need to understand the depth of this pandemic and how many lives it has affected — physically, emotionally and financially. It helps to put it all in perspective.”

Lincoln County on the Oregon Coast, which includes Taft, Toledo, Newport and Waldport high school, also will not opt in. The county could move from the High to Moderate Risk category next week, though, when the state announces the latest COVID-19 metrics. If Lincoln County’s situation improves, the district has said it will allow tackle football to go on, as schools in Moderate Risk counties do not need to follow the “opt-in” protocols.

Toledo coach Jeff Taylor prepared this week, the first when players could be in full pads, as if the Boomers will be playing tackle football this spring, “but whatever happens, I’ll be here for the kids,” he said. “I’m just waiting for the green light whichever way we go.”

While some districts debate whether to play full-contact or 7-on-7, Ashland announced this week that it will play a JV-only schedule because of low turnout.

Grizzlies athletic director Karl Kemper told the Ashland Daily Tidings that the program has only 25 players committed to the shortened spring season, of which at least half are freshmen.

“Anybody that walks out at our practice field would say we’ve got a JV team out there,” Kemper said.

Ashland will participate at the varsity level in the other Season 2 sports it offers (soccer, cross country and volleyball), and Kemper told the newspaper that the move is considered temporary.

“We fully intend to play varsity football in the fall,” Kemper said. “This is just kind of like a little spring ball thing where kids are going to get the opportunity to put on the pads and try different positions and figure out what we’ve got. There’s nothing at stake, there’s no playoffs, so we’re plugging them in at the level that they fit. This is what is best for this group of kids.”

At the same time, districts such as North Clackamas, which in early February told Oregon Public Broadcasting that it was not planning to initiate LIDI, have taken the necessary steps for tackle football to take place.

Grant coach John Beck, who also is on the OSAA and Oregon Athletic Coaches Association executive boards, said Friday that the PIL is in the process to have all its schools ready to begin the football season March 5.

Meanwhile, the three largest Eugene-area school districts — Eugene 4J, Springfield and Bethel — announced an agreement this week that will have its seven high schools opt into the season. Andy Dey, the high school director for 4J, told KEZI-TV, “We just all agreed, given all of the factors considered, that we felt as though we could safely pull it off.”