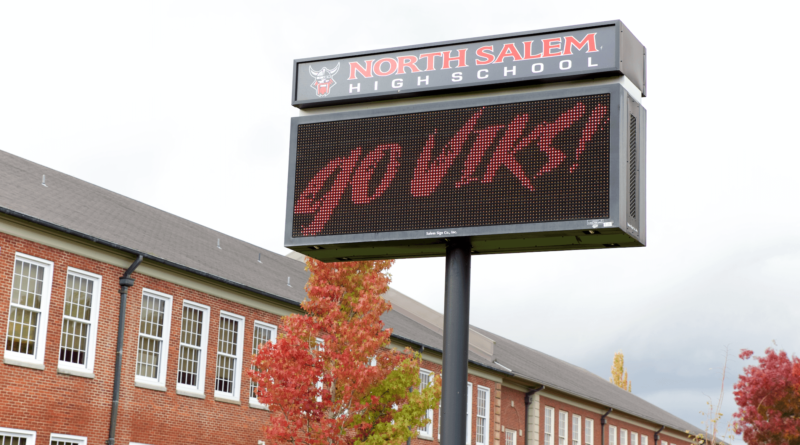 Over the next few weeks, SBLive Oregon will break down every 6A, 5A and 4A football team in the state in anticipation of a six-week season in March and April. Even if the season is postponed or canceled, we will continue to highlight more than a hundred teams and more than a thousand players in Oregon. Here’s our look at the North Salem Vikings of the Class 5A Northwest Oregon Conference West Division.

Hubbard was second-team all-Mid-Willamette Conference at offensive line as a junior and will be a third-year starter. At 6-foot-5, 290 pounds, he’s an athlete — he plays on the basketball team — not just a large body. “Athleticism is something that we don’t have to worry about with him,” Flood said. “He moves really well. He’s got really good feet. Combine that with his size and strength, that’s a pretty good combination for us.” Hubbard is No. 30 in 247Sports’ Oregon class of 2021 rankings.

Maldonado started at guard as a junior and is another part of an offensive line that Flood calls among the team’s strengths. The 5-7 Maldonado is like a “block of granite,” Flood said. “I don’t know what he weighs, but I wouldn’t want him running at me.”

Another returning starter on the offensive line, Razo played tackle as a sophomore but is being moved to center. The 6-foot, 250-pound junior also plays basketball and moves well on the football field. “I think he’s got a really, really bright future,” Flood said, adding that Razo is excellent on defense.

Flood said Rico was really good last season, and “I think he would be great this year (assuming there’s a season).” Lanky but physical and armed with a good catch radius, Rico earned all-Mid-Willamette honorable mention at tight end and defensive line last season. “He’s excellent on the defensive side,” Flood said. “He’s really, really improved at tight end. He was physical last year. Just the nuances of running routes and getting open wasn’t something he was used to. He’s accustomed to that now. Defensively, every team had to scheme for him.” Flood projects a bright future for Rico.

After playing quarterback when he started football, Hinton-Welty has knowledge of the offense whatever position he is at — which is just about everywhere for the Vikings. This season, he will probably play wide receiver. “He will be somebody we can move around to different positions,” Flood said. On defense, he’s a third-year starter and was the “center field captain” of that unit as a junior.

Gonzalez started the final five games of 2019 at defensive back as a freshman and, Flood said, is an incredible athlete. He has added about 20 pounds to the 120 he played at last season, and his skills on both sides of the ball have the coach excited. “It was the first time since I’ve been here at North that we started a freshman,” said Flood, now in his 13th season. Gonzalez received some action last season at wide receiver. “He’s probably got the best hands we’ve had here since Dylan Young (who later was an NAIA all-American at Southern Oregon University) in 2009,” Flood said. “Erick is a really, really special athlete. So, we have to get him the ball.”

Flood said Davis had the talent to play varsity more than he did last season. “We just didn’t want to rush him into things,” Flood said. Fast and elusive, the 5-foot-10, 160-pound Davis makes would-be tacklers miss. “We haven’t had that type of running back in a long time,” Flood said. “He will carry the bulk of the load for us this year. He’s a huge part of what we’re doing. Our offense will revolve around him.”

North Salem was 2-7 in the Mid-Willamette Conference for the second consecutive season. Looking at comparative scores from one season to the next, 2019 appeared more competitive, as two of the Vikings’ losses last season were by a combined six points.

Assessing his team for this season, Flood started up front.

“Like with most teams, it starts with the offensive line,” he said. “We have a pretty good group coming back, some with experience and some with a trajectory of where they’ve been and where we think they’re going to be.”

Flood is hopeful that his senior class gets to have a season, to have something tangible to remember from their time in the program.

“We want to make sure this is a really positive experience,” he said.

Flood said the Vikings will continue to run the wing-T out of multiple looks and will take advantage of the skills of freshman quarterback TC Manumaleuna. At 5-foot-11 and 165 pounds, Manumaleuna was No. 10 among dual-threat quarterbacks for the class of 2024 in a mid-January national ranking on the QB Hit List website. According to 247Sports, Manumaleuna has received an offer from Oregon.

“We’ve been looking forward to having him at the high school level for quite a while,” Flood said. “He’s received a lot of accolades around the country, going to a lot of camps and receiving offers already as an eighth-grader. His trajectory is really, really high.”

For the younger North Salem players, a delayed season comes with a silver lining, in Flood’s view.

“Fortunately, one of the good things about this season being postponed is we get a lot of young kids who are a half-year older now before we throw them into the fire,” Flood said. “There’s a big jump from when you start high school to when you can play Friday nights. I think (Manumaleuna) is ready for that jump. … He’s someone who’s going to be a very good quarterback for us.”

With Manumaleuna at the helm, look for the Vikings to pass more frequently than a typical wing-T offense.

“Our goal is to obviously have a very solid running game,” Flood said, “but we have weapons to take advantage of throwing the ball as well. I anticipate we’ll be fairly balanced.”

A proven offensive line and promising skill position players give North Salem reason to be optimistic. The Vikings this season are in the Northwest Oregon Conference West Division. Assuming they play some division opponents, they might find that this circuit isn’t as top-heavy as the Mid-Willamette frequently is.

“We want to always build a program around the talents of our kids. Defensively, offensively, we want to make sure we’re putting them in the best position to succeed. The first thing before you do that is find out what that position might be.” — Jeff Flood