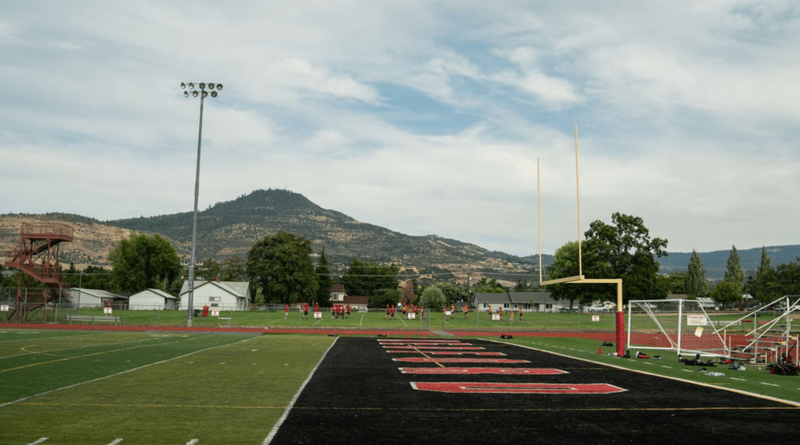 Over the next few weeks, SBLive Oregon will break down every 6A, 5A and 4A football team in the state in anticipation of a six-week season in March and April. Even if the season is postponed or canceled, we will continue to highlight more than a hundred teams and more than a thousand players in Oregon. Here’s our look at the North Medford Black Tornado of the Class 6A Southwest Conference.

Playoffs: Beat Reynolds 55-49 in first round; lost 50-35 at Tualatin in second round

Bradd put up monster numbers last season, rushing for 1,581 yards and 26 touchdowns (fifth in Class 6A). He was a first-team all-Southwest Conference pick on offense and could be in the mix at outside linebacker as a senior. “Devin is a very powerful runner,” Turner said. “He has good speed, not great speed, but his vision and strength are outstanding.”

As a junior, Sandusky led the SWC with nine sacks en route to earning first-team all-conference honors. Turner said Sandusky lost weight in the offseason but added muscle to his 230-pound frame. “He was probably the second-best guy in the league last year behind (Sheldon’s Taylor Johnson),” Turner said. “Jayden is a very physical player with a great motor. He is an outstanding D-lineman for us.”

Pugliano was first-team all-SWC at linebacker as a junior and is slated to play some wide receiver this season, Turner said. “We are fiddling around with him at some different positions,” Turner explained. “He is one of the smarter kids on our team and understands our defense, so we may use him in several spots.”

Morris, one of the fastest players on North Medford’s roster, tied for fourth in Class 6A last season with six interceptions. He earned first-team all-SWC honors at cornerback. “I believe he is even better now than he was last year,” Turner said.

Turner likened Costanzo to former Black Tornado star Jett Carpenter, a dangerous 6-foot-4 receiving target who now plays for Eastern Washington. Costanzo, a second-team all-SWC receiver last season, is 6-foot-2, weighs 190 pounds and will contribute on offense and defense. “He is a mini Jett,” Turner said. “Not quite as big, but he’s just like him. He’s a good one.”

Gail transitioned from fullback to center for his junior season and made second-team all-SWC on offense. Turner praised Gail for learning the nuances of the offensive line so quickly. “He’s a football guy, the son of a coach, so he understands the game really well,” Turner said. “He’s not a large kid, but he’s got good football smarts and is a pretty good technician up front.”

A returning second-team all-SWC defender, Prince started opposite Sandusky last season and made plenty of plays from the defensive end position. Turner said Prince is one of the most naturally strong kids in the program. “For a defensive lineman, he has really good speed and hands, and he’s a tough kid,” Turner said. “We look for him to be better as a senior.”

Gaoiran played through a knee injury last season and still earned second-team all-SWC honors at linebacker. He underwent offseason surgery and is back to 100 percent. “He still played last year and was our leading tackler by a lot,” Turner said of Gaoiran, who also wrestles. “He is an outstanding tackler.”

Dyer was a monster at the junior varsity level as a sophomore, hauling in around 25 touchdowns. He caught the winning score in overtime of North Medford’s first-round playoff victory over Reynolds and had another touchdown against Tualatin. He also is a star basketball player. “Bryce is going to really add a big dimension to our passing game, and he’s also going to help us in the secondary,” Turner said.

Already 6-foot-3 and 310 pounds, Fuiava received some playing time as a freshman and will be counted on for more this season. He is a strong shot putter and was the heavyweight runner-up at the 2020 Southwest Conference district wrestling championships. “He played some last year for us in the playoffs and he moves really well for his size,” Turner said. “He could be the real deal.”

It was set up to be a special fall football season for the Black Tornado. With 13 starters back — the majority of whom received all-conference recognition in 2019 — from a team that won a playoff game, North Medford had aspirations far beyond securing the program’s first conference championship since 2013.

Some of those goals are now off the table, but the Black Tornado have plenty to look forward to this season and beyond.

“We are really optimistic about this whole group, and when I say whole group, I mean ninth grade through the seniors,” Turner said. “We’ve put a lot of emphasis and will always continue to make sure the freshman and sophomore programs are learning and getting better. As coaches we are involved with all levels, and that’s paid off.”

“Combine that with our seniors and juniors, and that’s a good group,” Turner said.

“We have a lot of kids returning that have played some good football and got two playoff games in (last season),” Turner said. “And that’s usually the hump, learning how to play an extended season when you’re playing good teams at the end.”

Quarterback is one of the team’s biggest question marks as senior Colby Neron and junior Mason Warren are battling for the starting job. Neron made two starts as a sophomore and had plenty of success at the JV level, as did Warren.

Regardless of who wins the quarterback job, North Medford has the pieces in place to be victorious in every game this season.

“If we play the schedule we’ve been presented, it has all our league teams in it,” Turner said. “So, let’s go win the league championship. That’s the goal every year and it hasn’t changed. We should’ve won the league last year, so we’re going to go up to Sheldon and replay that game.”

“I am not a boisterous predictor of where we are, but I know what we can be, and I don’t really need to expand on it. The worst word for a football coach is potential.” — Steven Turner