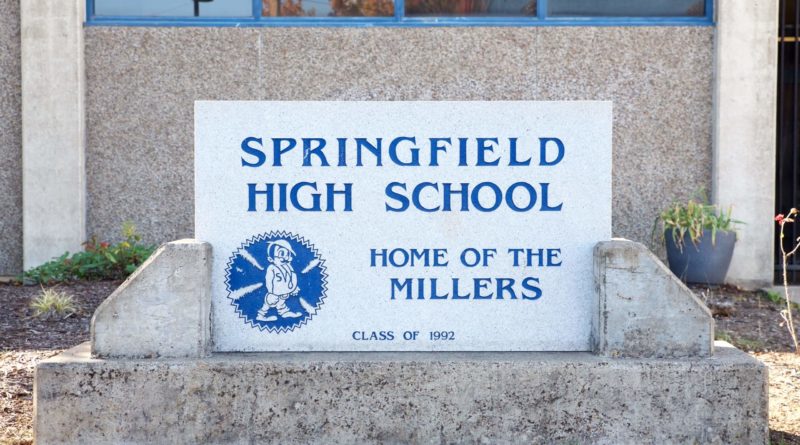 Over the next few weeks, SBLive Oregon will break down every 6A, 5A and 4A football team in the state in anticipation of a six-week season in March and April. Even if the season is postponed or canceled, we will continue to highlight more than a hundred teams and more than a thousand players in Oregon. Here’s our look at the Springfield Millers of the Class 5A Midwestern League.

Robinson dominated fall 7-on-7 competition in Eugene and has Western Oregon and Southern Oregon paying close attention. Not bad for just his third year of organized football. “He’s primed, he’s ready to go, he’s worked as hard as he’s ever worked,” Haley said. “He’s going to be a big-time guy.”

Sorber has been a multisport workhorse for the Millers throughout his high school career. “It feels like it’s his seventh year playing at Springfield High School,” Haley said. A classic slot receiver with sure hands and an eye for space, Sorber also serves as a hard-hitting defensive back. Just as important, he’s an example for his younger teammates. “He’s a leader, and that’s what we need,” Haley said.

Unrein made the all-league second team as an offensive lineman in 2019, a worthy reward for taking his lumps when he was thrust into a varsity role early in his career. At 6-foot and 270 pounds and with a wrestler’s knowledge for body manipulation, Unrein these days administers the lumps on both sides of the ball. “He’s a really good player,” Haley said. “He’s a guy who I count on a lot.”

With a shock of bright red hair cascading out the back of his helmet and down his back, McDonald is impossible to miss on the field. “If I was a fan watching a game, he’d be one of my favorite players,” Haley said. “He just flies around. He’s so fun to watch as a coach.” It’s not just aesthetics. “He’s an intense dude, too,” Haley continued. “He’s a guy you want leading your defense.” Despite his slight build (5-foot-8, 145 pounds), McDonald is a heavy hitter at safety, earning all-league honorable mention as a sophomore. He’ll become a more integral part of the Millers’ offense this season at running back and slot receiver. “He’s going to ball out this year,” Haley said.

Colter will assume the starting quarterback position this season. “He was a kid I watched last year in a JV game — he took off on a scramble and went about 80 yards up the sideline,” Haley recalled. “It was a moment where I thought, ‘This kid’s got something.’” Colter excelled as a passer in fall 7-on-7, and his explosive running ability should make him a constant big-play threat. “He proved he can be a gunslinger,” Haley said. “He’s not afraid to make throws downfield, and when you add the running element onto it, I think it’s going to surprise people.”

Haley took over the program just before camp started in 2019. Now, his second season has been derailed by a global pandemic. But Haley is in this for the long haul.

“Our main thing was to try to change the culture, trying to start a foundation that’s set up to win football games down the road,” he said. “The last part of a culture change that shows up is on the scoreboard.”

So, while the usual offseason workouts, preseason camps and all of the other markers of the typical football calendar have been truncated, rescheduled or tossed, the real work Haley is interested in continues.

“When you’re talking about culture and creating habits, that’s something you can work on each day. Each day is a chance to get better,” he said.

The upcoming season will be a short one, but the prize Haley is after is still out there.

“The next step in the process is being competitive in every game. We were in a couple games last year that were one-score games at halftime,” he explained. “Can we flip those around to us being up one score and finishing those games? Can we start competing with Thurston? That’s a step we’ve got to take, being realistic.”

While he has a realistic assessment of how his Millers line up with the Colts, Haley wants his players to be able to wear blue and white around town the way their rivals sport red and black, even if there aren’t championship rings to match — yet.

“Being a Springfield alum, one thing I’ve talked a lot about is pride,” he said. “Being able to wear sweaters and feel good about what you’re doing. That’s not always wins and losses, it’s culture. It’s being proud of what you’re putting out there. If we’re going to lose a game, it’s because a team beat us. We’re not going to hand anything over.”

Put another way: Regardless of schedules, pandemics or other obstacles, the success of these Springfield seasons — last season and this one — will be measured further down the road. But all signs appear to be pointing upward for the Millers.

“We’ve got some tough kids, we’ve got some good athletes, and I know the kids are excited to show the growth themselves — it’s not just me spouting it off.” — Miles Haley