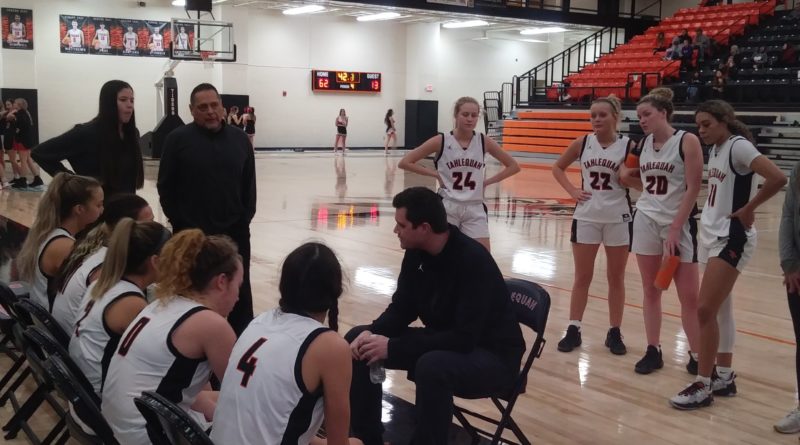 TAHLEQUAH — Sure, for coach David Qualls and his Tahlequah girls team, they were able to get a win at home Friday.

As far as Qualls and the Lady Tigers were concerned, though, the bottom line was they were just glad to be playing.

In the midst of a flurry of postponements and cancellations of games statewide due to COVID-19, the Lady Tigers were able to get their game in on Friday. And they took full advantage of the opportunity.

Tahlequah led from start to finish, scoring the game’s first eight points while scoring 49 points before halftime. The Lady Tigers went on to a 77-15 win at Tahlequah High School to stay perfect in Metro Lakes Conference action at 6-0.

“Really for us, it’s just good that we got to play (Friday) because we’ve played one game in the last 15 days with cancellations and stuff,” Qualls said. “It’s good for us to just get back on the floor.”

Certainly, the Lady Tigers showed no signs of rust. In the first two minutes of play, they came up with four steals and were up 6-0 before Skiatook took its first shot attempt.

Tahlequah reeled off the next 12 points, starting with back-to-back 3-pointers from senior Tatum Havens. Havens then finished off that run with another 3, extending the lead to 20-5.

“We feed off of our defense and we were just finding the open girl and knocking down shots and just playing as a team, which is always great,” said Havens, who has signed to play at East Central University in Ada.

“My teammates did a great job of finding me when they needed to.”

Havens had two more 3’s in the opening half and finished with six treys on the night.

“She shot it well, and she’s a capable shooter,” Qualls said. “She’s one of the best shooters on our team and with her, if she can get that first one to go, you know it’s going to be a good night and we were proud of her that she was looking for her shot (Friday), and she was great for us.”

“Our defense was really good with our ball pressure, we finished well, we were moving the ball really good and getting the right play at the right time,” Lady Tiger senior guard Smalls Goudeau said.

Both Havens and Goudeau – who has signed to play at Texas-Arlington next season – scored 20 points apiece in the win. They each had 15 points in the first half.

“Smalls gets a lot of her stuff in transition, and she’s just such a great athlete,” Qualls said. “She’s so quick with the ball and got some easy layups (Friday) and scored off of the press a little bit and then she came down with a 3, so her overall game has kind of been peaking at the right time.”

Tahlequah (10-2) suffered its only two losses at the recent Tournament of Champions in Tulsa. The Lady Tigers lost their first two games in the tournament, to Holland Hall and to Seiling, before bouncing back to defeat Booker T. Washington for seventh place.

A season ago, the Lady Tigers reached the 5A state title game before falling to Sapulpa.

“We had a couple of games where it wasn’t where we wanted it to be,” Goudeau said. “We didn’t come out the right way, but I think we’re back on track and our shots are starting to fall, which is really opening up the lane and everything is just starting to work out for us.”

The Lady Tigers also got 10 points from Jadyn Buttery in Friday’s win.

“Offensively, we’re starting to peak with our outside shooting,” Qualls said. “We weren’t shooting from the outside that well early in the season, and we’ve shot it really well from 3 the last couple of games.

“We’re a team that likes to turn their defense into offense, and obviously we like to press and get after it a little bit, and we did that early in the game, and got some steals and got some easy (baskets), and had a good first quarter with 30 points.”

On Tuesday, the Lady Tigers travel to face another conference foe, Collinsville. Then starting on Thursday, they will take part in the Port City Classic in Catoosa.

The Tigers entered Friday’s home game on a roll.

They kept that going with two big runs to start each half, as Tahlequah (8-3) has now won six straight ballgames.

“I think we’ve been playing with a lot of confidence; the guys have been putting in good work in practice, and I think everybody’s kind of learning their roles and knowing what they need to get done, and it’s been exciting to see them come together as a team,” Tahlequah coach Marcus Klingsick said. “Six in a row, against pretty good competition, and we want to keep that going next week, so we’re excited about that.”

But in Friday’s win, the Tigers did something they weren’t necessarily doing a good job of, even in the previous wins during their current streak. That was starting out of the gate strong.

Tahlequah made sure that was the case Friday, as the Tigers scored the game’s first 16 points. The run featured a pair of 3-pointers from senior guard Braylon McDowell.

“We’ve been slow starters in the first half,” Klingsick said. “The second half, we’ve been pretty good, so I was proud that we came out and we did a couple of things to get ready, kind of get them going in the first half and our press really helped us out, both halves, to kind of get us going.

“We’re not really looking to score out of (the press); we’ll take it if we can, but it just gets us playing at a faster pace, and I think we really played off the speed of the game and we kind of got some good, easy looks and did some good things.”

Hayden Smith, a 6-foot-6 junior post, finished off the run by scoring two straight baskets after the Tigers got backcourt steals from guards Tyler Joice and Bryson Page for finishing layups.

“The first few games, we weren’t starting off as well, and now we’re starting off well and we’re keeping it going,” Smith said.

“We’ve been playing a lot more together these past six games. … We’ve just jelled; I mean, we’re just playing a lot better. Practices are a lot harder and it’s a new group that we play with; we lost a lot of players last year and it’s just a lot different, and we figured it out.”

Tahlequah has also done a better job of taking care of the basketball during its current six-game win streak.

“In the first few games, we were averaging like 20 turnovers and now we’re down to like 11, so it’s a lot better there, too,” Joice said. “Then defensively, I feel like we’ve jelled more together. … We go after loose balls and everything.”

Klingsick echoed Joice’s thoughts on the work the Tigers’ defense has put in over the past several games.

“I think our defense has just gotten better and better every game, and we can kind of hang our hat on our defense, and our offense is going to come from our defense, so we really committed the last few weeks to really playing really strong defense, whether its zone or man, and the press has really helped us out,” Klingsick said. “We’ve pressed a lot of teams, and that gets us going.”

Smith led all scorers with 14 points, while McDowell added 12 points. Tahlequah also got 11 points from sophomore Zeke Guerrero, who made three 3’s.