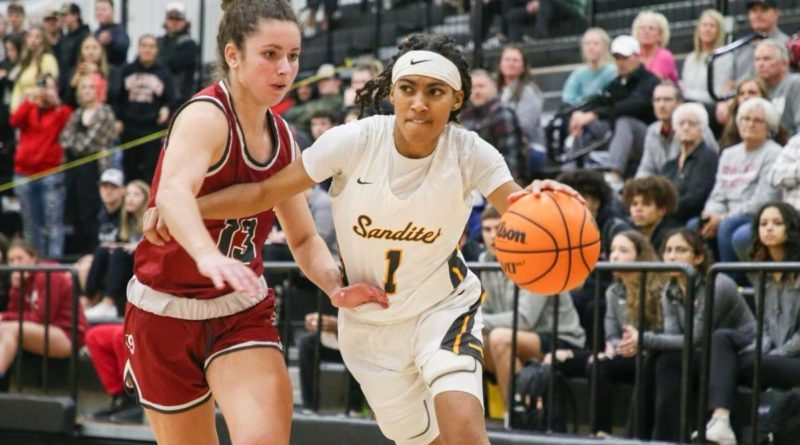 A big reason Sand Springs has raced to a 9-0 start this season has been its defense.

The Lady Sandites have allowed 29.2 points per game. The most points they gave up was in their previous game, 46 against Broken Arrow on Tuesday.

But Sand Springs still won by 20, 66-46, against a team that was coming off a first-place finish at the Bartlesville Invitational. The Lady Sandites also held the Lady Tigers’ top scorer, senior guard Taleyah Jones, to two first-half points, though Jones still finished with 16 points.

“I thought it was a big win,” Sand Springs coach Josh Berry said. “I wanted them to see how our girls were going to kind of react to it and I knew they were coming off a high.

“We just wanted to come out and really push the tempo and put some pressure on them, and I was just proud of my girls the way they took on the challenge of guarding Taleyah Jones, which is a handful, and I thought they did a good job of that and just playing hard and playing together.”

Berry added his team has had contributions from several players instead of solely relying on players like 5-foot-9 senior guard Journey Armstead, who has scored more than 1,500 career points.

“It’s been good starting off undefeated, but the beauty of it is watching these girls grow and kind of get better and play better each and every game,” Berry said. “It used to be a whole lot of Journey Armstead and a little bit of everybody else, and that’s changing for us.

“There’s a lot more contributing for us, and a lot more players that’s stepping up and taking bigger roles on, so I think that’s really contributing to us being 9-0 along with our defense. I think our defensive pressure is what a lot of people hadn’t seen before.”

In Tuesday’s win, Hailey Jackson, a junior forward, scored 31 points and grabbed 11 rebounds while coming up with four steals. Jackson is averaging at least 15 points and eight boards per game.

Berry added the Lady Sandites are getting contributions from Layne Kirkendoll, a 6-foot-2 senior who can block any shot around the rim but can also be able to guard the perimeter, and sophomore point guard Kauri Wilson, whom Berry lauds for her ability to handle the ball and apply defensive pressure.

Sand Springs is scheduled to play at Bartlesville on Friday and returns home Tuesday against Muskogee. The Lady Sandites will play Jan. 20-22 at the Jenks/Union Tournament in Tulsa.

Despite a challenging schedule, Weatherford has more than held its own up to this point.

Through their first 14 ballgames, the Lady Eagles stand at 12-2. Last weekend, the Class 4A Lady Eagles won the championship of their Weatherford Tournament, beating three 5A foes.

Weatherford defeated Elgin in the first round (85-35) and Bishop McGuinness (63-35) in the semifinals. Then in the title game, the Lady Eagles recorded a 75-45 win against Piedmont.

“So far, we have had a strong start to the season,” Weatherford coach Grant Givens said. “In our first 14 games of the season, we have played seven top 10 teams, four of which were in the top five, and two other games were against top 15 teams, and we have come away with only two close losses.

“In those two losses against top five teams, we did not have our starting point guard and with her. we more than likely do not lose those games.”

“We as a team have played very well defensively, which has carried us through a tough schedule,” Givens said. “During our tournament, I thought we played extremely well on both sides of the ball. If we continue to improve, we should have a long playoff run.”

“Both are averaging double digit scoring and defensively, they have played extremely well,” Givens said.

Weatherford was to have played Bethany on Friday but that game has been postponed due to COVID-19. The Lady Eagles’ next scheduled game is at home on Tuesday against Altus.

“I’m really pleased with my team’s play,” Lady Chieftain coach Darlean Calip said. “We are still a young team and growing every time we take the court. I thought we grew up tremendously in the game.

“Lincoln is a well-coached team, a really good team respectfully in any class and for us to get the win on the road in a great environment was great experience gained for our team. We keep learning and growing and that’s what you strive for as a coach.”

Sapulpa (7-2) had two games this week postponed due to COVID-19. The Lady Chieftains’ next scheduled game is Tuesday at Broken Arrow, and they will also play at the Shawnee Invitational Jan. 20-22.