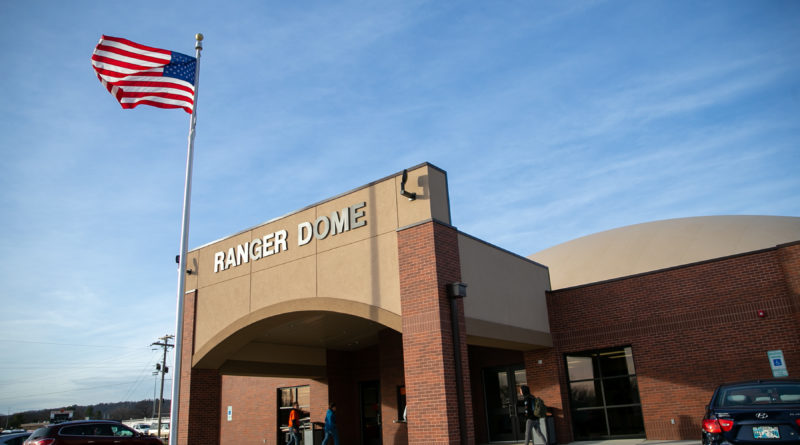 ROLAND — Traveling to Roland High School on Roland Road off of U.S. Highway 64, you will eventually cross a bridge going over Interstate 40.

Once you go over that bridge, you’ll see something off to the left that initially seems to be out of place in this community of more than 3,000 located a few miles west from Fort Smith, Ark. But for these residents here, it’s perhaps a welcome sight.

It’s the top of a domed structure, and when you get closer into view, it’s part of a gleaming new facility on the Roland High School campus. Originally called the Roland Event Center, it’s now commonly known as the Ranger Dome, named after the school’s mascot.

The Ranger Dome is a brand-new, $6 million dollar facility that’s more than 20,000 square feet. It took 19 months to build, starting in March 2020 and finally being completed this past October.

It’s also a big step up from the school’s former basketball facility, Carl Matlock Field House, which was built in the 1970s and was known for its tight, cramped quarters.

The old gym was one of those places where seating could definitely be limited, especially when archrivals such as Muldrow and Sallisaw came to town. There were even times where spectators had to walk in front of both teams’ benches to find a seat.

But that’s not the case in the Ranger Dome. Fans can now get to traverse a vast concrete walkway behind each team’s benches to find seats. And there’s plenty of places to sit.

You can find a chair-back seat on each side of the court. Or you can walk up into the bleachers behind both baskets. In fact, during Roland games now, the student section has staked its claim to one set of bleachers.

The Ranger Dome finally opened up for basketball last week, appropriately enough, with the facility being the main site for the Armstrong Bank Sequoyah County Area Classic. Since the tournament was formed in 2000, it rotated each year between Muldrow and Sallisaw, though Muldrow hosted it last season for the second straight year due to COVID-19 issues at Sallisaw.

But finally, with the Ranger Dome open for business, Roland administrators wanted to be in the mix to host the county tournament.

“We were excited to get to do that,” Roland superintendent Randy Martin said. “Our staff and our fans were really wanting to host the tournament that we’ve played in for a lot of years, and to finally get to be the main site, it was a big deal to us, so we were really thrilled to be that main site this year.”

And fans, not just Roland fans, responded once the new venue was finally able to hold basketball games.

“A lot of (feedback) what I hear is the space and the seating areas,” Martin said. “It was a big deal and kind of comparing it to our old facility, it is quite a bit more. Then just the traffic flow of the walkways, where people are not stepping all over each other, it’s just a good-sized facility in that way.”

Greg Pratt, Roland’s girls basketball coach, observed he has heard more wows from the fans over the new place than even from his players.

“There’s not a bad seat in the house,” Pratt said. “That’s the thing that I’ve noticed, that the fans and people like that, they are so excited to be able to come to the ballgame and be able to sit in a facility like this.

“And what I like, too, is we’ve got people off the court; whereas in the old gym, people were right on the court, but when you’re up there, it still doesn’t feel like you’re extremely far away from the action. So I think that was a good design, so people still feel close to the action because people like that.”

Roland’s locker rooms are located on opposite ends of the court, and to reach those, one has to walk a curved hallway.

Not surprisingly, the locker rooms have been upgraded from the old gym, complete with a trainer’s table and a game clock on the wall which is synchronized with the clock on the scoreboard, letting both the Rangers and Lady Rangers know when it’s time to return to the court.

“It’s honestly real crazy going from that small gym we used to have, and now we’ve got all this big stuff, like our student section’s crazy now,” said Tuvaris Noonan, a senior on the Roland boys team. “In the old gym, it was just tiny, and now we can fit the whole town in here.”

Another unique feature of the Ranger Dome is the building’s acoustics. With the domed design, the noise circulates all around the building, and it has already been proven it can get really loud in there.

“It’s very loud,” said Racheal Watie, a senior on the Roland girls team. “I think it’s a good atmosphere to play in because if we get going and we get farther down the road and make it to state maybe, it’s like here it’s very loud and it’s going to be like you’re playing in an area or regional tournament.

Even Eddie Lewis, a Roland native who has won more than 700 games in 40 years as the Rangers’ coach, was on board with the move to the dome.

That’s another thing that stands out about Roland: It’s long been considered one of the premier basketball towns in the state. Lewis has taken 10 teams to the state tournament, and the Rangers were a state runner-up in both 2007 and again in 2013.

Lewis also had the top-ranked team in the state in 2020 when the Rangers qualified for the state tournament. But of course, that tournament never took place due to COVID-19.

Roland’s girls have also fielded solid teams over the years. Pratt has taken the Lady Rangers to state in two of the past three seasons, including 2021 when Roland took an undefeated record into the tourney before falling to Jones in the 3A title game.

With Roland, who had been in 4A during the 2000s and the first half of the 2010s before dropping down to 3A, having an arena to fit the capacity of the school and the town was another consideration to take.

“I’ve heard people talk about, when this was first built, they talked about, ‘Man, I thought it was going to be bigger,'” Pratt said. “We don’t need it any bigger. If we start getting it too big, then we’re never going to fill the thing up and the atmosphere that you want in a high school basketball game’s not going to be there.

“This fits us, this is perfect for us. … That’s plenty for 3A Roland.”

The Ranger Dome will not just be used for basketball. It will be used for other activities, and will also be a community-wide tornado shelter, another selling point in the bond to build the facility eventually getting passed a few years ago after various other proposals over the years were eventually voted down.

“The tradition itself that Roland has in basketball, I think, maybe made everybody want to hang on to the old gym,” Martin said. “There’s a little nostalgia associated with it and there had been so many good memories there.

“I think people finally realized that it was just kind of time to move on, and the storm shelter aspect and part of the bond issue also, we were able to do a lot of repairs on campus. I think the patrons of the school district wanted to see those classroom buildings taken care of, too, so getting all of that done I think made it a more viable project.”

Across the Arkansas River into Fort Smith, the two rival high schools, Northside and Southside, have opened up arenas of its own this school year. Arenas in the nearby towns of Van Buren and Alma have also been built in the past several years to rave reviews.

Spiro, a conference rival of both Roland and Muldrow, opened up its basketball arena in 2009 and has been notable for serving many years as the site of the finals of the LeFlore County Tournament, the longest continuously operating basketball tournament in Oklahoma. Another conference opponent, Checotah, also has a fairly new arena that has become a popular place to hold postseason regional and area tournaments.

Once the Ranger Dome was finally open for business, everything went off smoothly last week. But alas, for both home teams, they weren’t able to win the county tournament.

Instead, that honor went to both the boys and girls teams at Muldrow, just a few miles farther down Hwy. 64 from Roland. Muldrow fans also came out in full force for the arena’s debut, and even had its own rowdy student section to match the Roland students in the title games held last Saturday.

“It’s really nice; to be able to come over and play the first county tournament in it, it makes it special,” said Jana Armer, who has been Muldrow’s girls coach since 2000. “It’s definitely something to be proud of.”

And that pride is rising just as high as the top of the dome one sees when heading to see a basketball game being played in Roland these days.